The eighth generation of home consoles is just getting started, but combined sales for the PlayStation 4, Xbox One, and Wii U are expected to hit 200 million units by 2019, according to a report released by DFC Intelligence. 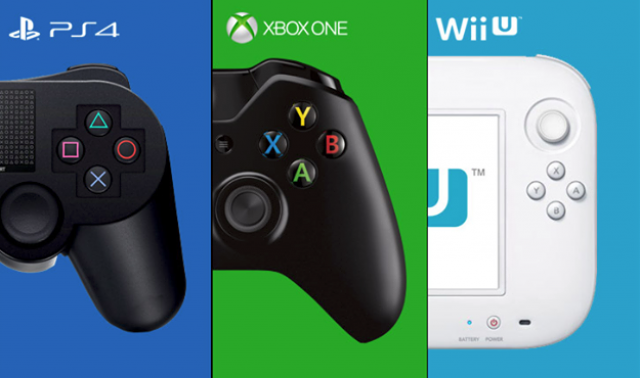 Overall, the entire video game market is expected to reach $100 billion by 2019. This includes sales from consoles, handhelds, PCs, and smartphones.

They better not try to phase out physical game releases.

i think it is mostly phones and PC.

I don't think the WIi U will still be Nintendo's home console in 2019.

Even PS2 couldn't sell that that fast. That's just unrealistic for the PS4. Also the Wii U is impossible at this point. Xone is at least realistic.

Too much all console. This gen is not going to have legs like last gen, and the peak is the firsts years now...

things can change Ryng_tolu, i think you realize that. Those PS4 and Wii U sales are not even possible. The XBO sales at least could happen. It's not what i'm predicting but XBO could come back to 2:1 to PS4, that is not an unrealistic prediction. They practically share the same library, it's not that much of a stretch.

The most optimistic estimate I can give for total global eighth-gen console sales is 170 million (100M for PS4, 50M for XBO, 20M for Wii U). There's no chance in hell we're getting to 200 million at any point, much less by 2019. Not with the Wii U unlikely to reach 20 million versus the Wii's 100 million, and not with the overall global market obviously souring on Xbox. Sure, combined 360 & PS3 sales are sitting at 190 million, but not only was last generation the most protracted one ever (the 360 was 8 years old when the XBO launched), but Nielsen data suggests a very high rate of multi-system homes last generation, at least in the U.S. However, I for one don't see this generation being as protracted as the last one, and I also see there being a lot fewer multi-console homes this gen as well (and I'm saying this as a guy who owns all three current-gen consoles). Between a more normal duration for the generation and fewer multiplatform homes, combined lifetime sales of all consoles will be significantly down this generation. Total yearly sales of all three systems should remain very robust until the next generation begins, however.

I'm not sure how much this would account for total sales but failure rate should also be taken into account. I know we haven't seen much of this generation yet but I feel like the failure rate last gen will be much higher, which means more people will have double/triple-dipped. I just don't see these numbers being reached at all. Nintendo will sell ~80 million less, MS will sell ~25 million less...... Sony won't be selling 40 million more to make up for that. I have a lot more to say (hardware leaves little room for incremental improvement over the generation etc) but I'll leave it at that.

@Wonktonodi. Whoops. Thanks for pointing out my math error. I had a little brain fart there.

Too much in my opinion. I expect more like 150-170M but that's about it. To achieve 200M goal, the PS4 would need to ramp up and surpass the Wii's yearly sales it had in it's first years, which does seem unlikey already, and keep that up for 6 years, which I really don't believe it will happen. And also both the Xbox ONE and the Wii U would need to ramp up their sales too, and sell these consoles until that point, which seems unlikely especially in the Wii U's case.

I don't see it happening, I just don't, especially not the made up PS4 figures I'm seeing in the comments section.

I don´t think that the console gamers purchase as many digital copies as PC and Mobile gamers. Also, Nintendo is most likely going to release a new console after the year 2017.

Not realistic. I can see PS4 equaling PS3 at least in the long run while Xbox One is not that far behind. Wii U at most may sell 15M consoles. So something like 85M for PS4, 65M for Xbox one, and 15M for Wii U end up with something like 165M. Combined they should do very well, but not reach 200M to be honest.

Only 15% will be retail in just 4-5 years? Not gonna happen, at least not on consoles. Digital make up around 10% currently, it'd need to grow ~1-200% every year which it doesn't. Games get bigger. They should have studied the broadband infrastructures in most of the world before making that claim.

considering the paragraph that mentions the 15% is after the one on the total market including pc and smartphones, It's very possible with how much of the market is digital only or digital mostly already.

Just can't see their digital prediction happening. People like physical games and will keep buying them. Besides that in some places (Europe) physical copies are still significantly cheaper than digital.

so amazing, thanks the PlayStation 4, awesome.

Amazing? This would be a decrease by about 80 million between the 3 consoles.. I am not even sure the PS4 will hit 100 mil.. My guess is more around 90 mil for PS4, 65 mil for X1, and 22 mil for Wii U.. which puts us at more like 177 million consoles.. which would be over 100 mil less then previous Gen.. and the PS4 would be the ONLY console to surpass previous sales.. and it would be by only about 5 million consoles..

You realize this gen is going to be approx 70 million fewer consoles sold compared to last? PS4 monopoly means an overall industry decline.

That's a lot of consoles. Its possible, but we'll see.

I'm sure the Xbox one will sell more than the Xbox 360, otherwise all three consoles combined will definitely sell less than 200 million.

It's pretty clear the X One will be lucky to reach HALF of what the 360 did... Either really bad joke or really good trolling..

It's gonna be less than that I'm sure. Unless Sony and Microsoft announce that these are there last systems then yes they will sell that many. Otherwise, I don't see them hitting that many console sells by that time. Nintendo won't even be supporting Wii U at that time, I'm sure. Microsoft isn't doing so great right now either with XB1. Only PS4 is selling like crazy for who knows what reason. Idk. Maybe people feel it being their last system and want to get Sony's last gaming console. I think next generation of gaming will be shifting to digital. Which of course is not good. Nintendo, doing what they do best, will bring gaming back though of course! PS4 90,000>XB1 60000>WiiU 20000 = approx. 170000 by end of that generation not by 2019.

This is by far the most random arbitrary off the wall assessment I've read yet lol Who says this is the last of Sony home consoles? Source? Or did you just make that up to fit your delusional narrative? You said "Unless" they announce it is their last console(s) but then went on to say that (maybe) the reason PS4 is selling so much is because people "think" this is their last console... huh?! NO ONE thinks that. Not even Sony. Because it IS NOT. Besides, that would make people LESS likely to buy it than to buy it. Either way I think it would be a wash. Next gaming of gaming 'might' go digital more so.. but why is that a bad thing? I HATED the idea of digital most of last gen... I fought it hard... but this gen so far, it's amazing having so many games on my consoles and I rarely change out discs.. But I still get those games too. I think that's a more realistic idea of where we are headed.. a little bit of both. Oh and when did Nintendo ever bring back gaming? Are you going to say the Wii? If so, don't bother lol Also, your numbers are so far off I'm assuming you just made them up off the top of your head? I guess that works... Good luck with that lol

You could have just shortened your post down to "lolwtf are you on ayy lmao", it's not like what you said was a credible source let alone trying to be civil.