The year is 1912, and Booker DeWitt is given a task by a mysterious gentleman: “Bring us the girl, wipe away the debt”. The girl in question is Elizabeth, a young lady with remarkable powers who lives in the floating city of Columbia, founded by Father Zachary Hale Comstock, a born-again Christian preacher calling himself the Prophet. Your first impression of Columbia is a relaxed stroll through idyllic avenues, watching children frolicking in the street, couples walking by with their arms linked, and even a barbershop quartet hovering along in the sky.

BioShock Infinite’s parallels with the original are immediately obvious: a man travelling across the ocean, a case with a gun inside it, a lighthouse, travel to an impossible city that he didn’t even know existed. And yet, instead of a ruined shell you see a thriving utopia, with bright sunshine rather than murky seawater. This is a theme that pervades the entire game. It is like BioShock, but it isn’t. Unlike BioShock 2, this is truly the sequel that the game deserved. 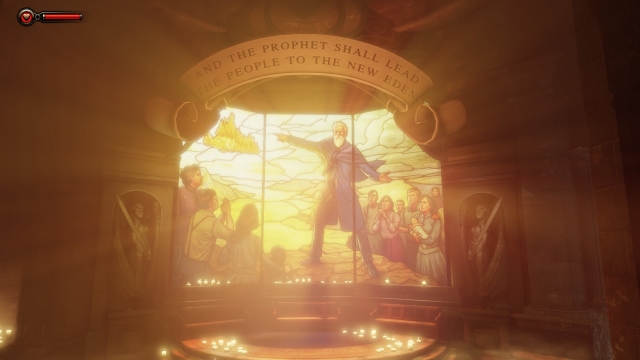 Despite his intentions of simply grabbing the girl and getting out, Booker is dragged into a sort of civil war between Father Comstock and the Vox Populi, a group of anarchists who want to empower the workers and tear the ruling class down. However, this only scratches the surface; the story goes much, much deeper than a simple ideological struggle: as it slowly unfolds, the truth begins to dawn, and by the end you will find yourself looking back and thinking “now that makes sense!”

BioShock Infinite is, at its core, a first-person shooter with a few RPG mechanics. As a former Pinkerton agent, Booker knows how to use a gun, and picks up a wide range of them during his time in Columbia, ranging from a humble pistol to something resembling a burst-fire flamethrower. In a curious and slightly disappointing change from BioShock, only two weapons can be carried at a time. It’s not necessarily a poor design decision, but the era of the weapon wheel seems to be dying and it would have been nice for a blockbuster title to carry it on.

The big draw of the combat, however, is the Vigor system. Vigors are special abilities afforded by drinking a special solution. Among them are Devil’s Kiss, which throws a fiery grenade towards your enemies, and Bucking Bronco, which suspends them in the air and leaves them vulnerable to further damage. Drinking a Vigor for the first time gives you the permanent ability to use it, as long as you have enough Salt (a form of mana) inside you. Neither health nor Salt regenerates, though early on in the game you are given a shield that does. There is also no capacity for storing health kits or bottles of salt – you must pick them up on the fly. This turns out to be an excellent system: you cannot simply run into combat and blast your enemies with everything you have, spamming the “restore Salt” button as you do so: you actually have to plan ahead, think about where you can restock, and decide how to use your Vigors most effectively. 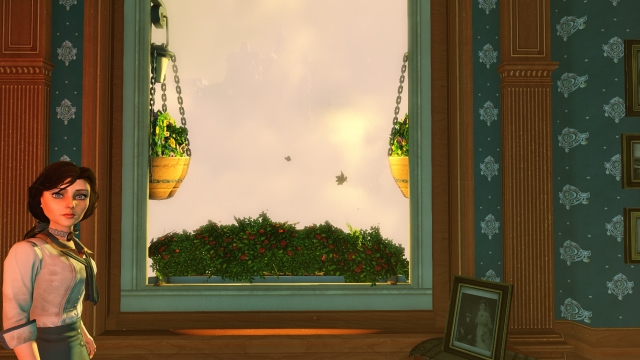 Other than as a plot device and almost permanent companion, Elizabeth serves two main purposes. Firstly, she will occasionally throw you ammunition, health or Salt during combat (whichever you need most, usually), and money that she sees lying around outside of combat situations. Secondly, she can open Tears, rifts in reality that allow her to bring objects through from alternate universes. For example, where in this universe there is only a patch of blank ground, in another somebody decided to construct a machine gun turret there. You can only activate one of these Rifts at a time, and in the case of health and Salt supplies or new weapons (which can also be Rifted into the level) you need to find your way to them for them to be of any use. This spices up the combat enormously, and makes every level different. When the game is at its absolute best, you are riding along skylines, jumping down to execute enemies, blasting more into the air and gunning them down before bringing in a supply of Salts to replenish your supply. And unlike so many games, BioShock Infinite is almost always at its best.

With her usefulness, her depth of character and the conversation that she provides, as well as the fact that she never gets stuck in doorways, Elizabeth turns out to be an excellent companion. It’s certainly not an entire game’s worth of escort quest: indeed, it could be argued that she is the one escorting you, since she brings you back whenever you die (for a small fee of 25 silver eagles, the game’s currency). This is similar to the Vita-Chamber system, but here there is no quicksaving and reloading: the game autosaves roughly every 20 minutes, and these are the only save files that exist. This actually works very well: you can’t just magically jump back in time after you’ve made a mistake in combat, you are forced to try and get through, and not severely penalised if you end up dying. 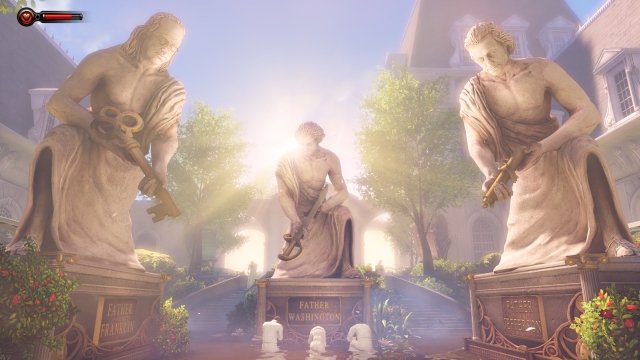 There are slow moments, but no dull moments. The initial sequence when you walk through Columbia is delightful despite its considerable length and the fact that it has almost no action whatsoever – it is a sign of Ken Levine’s extraordinary ability to create atmosphere, as seen both in BioShock and System Shock. But where BioShock was uniformly dark and sombre, Infinite has a great deal of variety. At times it is joyful and vibrant, and at others it is extremely dark.

With the money you find and catch around Columbia, you can buy three main categories of items. The first, consumables, aren’t really necessary: you have plenty of opportunity to refill your ammunition, health and salt in between battles. The upgrades you can purchase, on the other hand, are essential. There are dozens for your weapons and dozens more for your Vigors, so you certainly won’t be able to purchase all of them; rather, you have to tailor your purchases to your playstyle. I found myself greatly enjoying the use of Bucking Bronco combined with the hand cannon, so I was sure to fully upgrade both as early as possible. There were other Vigors and guns that I scarcely used at all, but it’s all personal preference as to which ones you will use more.

Infinite is linear, but not claustrophobic. There’s no need for a map, or a permanent quest arrow, though you are given a short arrow telling you the immediate path you need to follow if you get hopelessly lost. There are often small side-rooms to explore, containing a range of goodies: Silver Eagles to spend on upgrade, pieces of Gear (one per slot can be equipped at a time) that give you advantages such as improving melee damage; lockpicks that are used to open yet more side-rooms; and most interestingly, kinectoscopes and voxophones. The former present you with a short silent movie clip, often depicting important events in the history of Columbia. The latter are audio diaries from the game’s important character, and like in BioShock, these give you an insight into the history and reality of Columbia, which turns out to be even deeper and more interesting than that of Rapture. 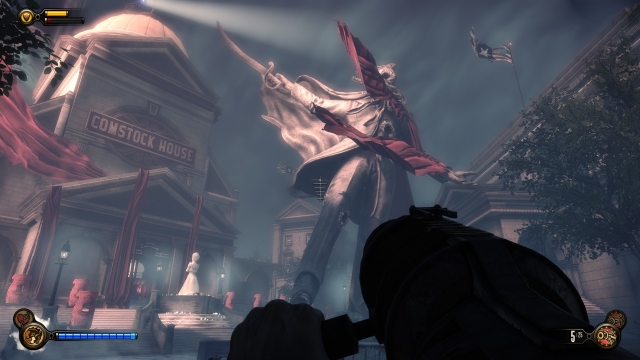 Surrounding the fascinating story and exhilarating gameplay are some impeccably designed and grand environments. The game looks incredible, so incredible that I took 260 screenshots over the course of my playthrough, and runs just as well even on a modest computer. The character models are excellent, and go together with stellar voice acting and some of the best use of surround sound that I have heard in a game. Often, the game itself has no music playing, instead leaving you to listen to phonographs and radios that you see lying around. Some of the darker moments, however, do have some atmospheric music playing.

BioShock Infinite has all of BioShock’s narrative depth, quality of storytelling and interesting characters – particularly Elizabeth, Comstock and the Luteces - all of its environmental design and atmosphere, and all of its fantastic gameplay, but refined almost to perfection and put in a setting that beats even Rapture in its innovation and beauty. It doesn’t feel like BioShock, or even a sequel, but rather a successor, something that takes the gameplay, the themes and the story even further than before, and wraps it up with a conclusion just as strong as that of the original, if not stronger. It is certainly one of the greatest games that I have ever had the pleasure of playing, and I only regret that it couldn’t go on longer. It ends up clocking in at around 11 hours, and though you can replay on the considerably harder 1999 mode, it just isn’t the same as your first time. I find myself desperately wanting more, and I can only hope that the upcoming DLC delivers it.

In the end, it is a stunning technological achievement and an unforgettable gaming experience. Certainly not since BioShock six years ago, and perhaps not even then, have narrative and gameplay been so masterfully fused into such an extraordinary game. Elements of it are familiar, but the game itself is like nothing you have played before. You owe it to yourself, and to the developers who spent five years creating such a masterpiece, to give it a try.

This review is based on a Steam copy of BioShock Infinite for the PC.