Twelve years and two console generations ago, the Nintendo GameCube debuted not with a traditional Mario game, but with a game starring his cowardly brother, Luigi. Instead of stomping on enemies and jumping to and fro, Luigi was saddled with a vacuum cleaner and tasked with sucking up the many ghosts inside a haunted mansion he had won in a contest. It was one of the strangest Mario games in the series, yet also became a fans favorite. Finally, after over a decade of waiting, Luigi gets to hunt down ghosts yet again in Luigi's Mansion: Dark Moon. With more mansions and new multiplayer modes, Dark Moon expands the scope of the series, though there are some spectral flaws throughout. 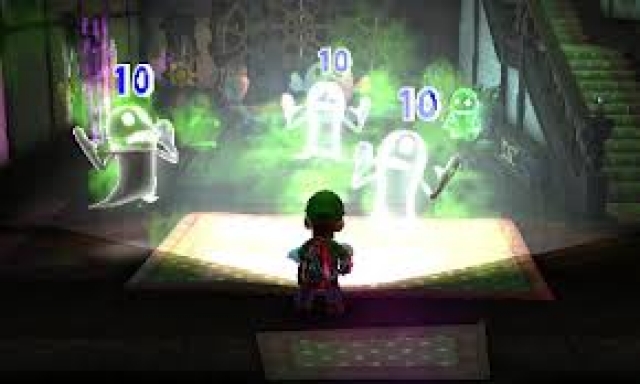 Professor E. Gadd is living a peaceful life with ghosts, who act as his compatriots in scientific study... until the Dark Moon is broken and taken out of the sky. Then, the ghosts become hostile and destructive. With phantasmal chaos erupting around him, Prof. E. Gadd summons Luigi to strap on the Poltergust once again, clean up the ghosts and restore the Dark Moon.

Piecing the Dark Moon back together will take Luigi on a quest through five different mansions full of ghosts that aren't too happy to see him. Each mansion is broken up into several missions where Luigi completes a checklist of goals that E. Gadd gives him throughout gameplay. As the game progresses, Luigi will gain more items, such as a strobe light that can be charged to stun multiple ghosts and a dark light that reveals invisible objects. The mission format lends itself well to handheld gaming, as most missions can be completed within 20 minutes, even when exploring for extra gems and money. Money collected during the campaign will go towards upgrades to the Poltergust 5000 and to the darklight device.

One of the strengths of the original Luigi's Mansion was how entertaining the characterization of Luigi and the ghosts was. Dark Moon continues that, with Luigi's demonstrative cowardice and the ghosts' playful behavior. The frightened green plumber tiptoes carefully as he walks, and in dark rooms, he has a very worried face when he runs. He'll even hum along to the background music during idle times. The ghosts will sneak up on Luigi to scare him, attack him while he's sucking up another ghost, and will even board up the peepholes that he's spying on them through. They can be seen tossing objects around, batting them like baseballs and toying around with the environment. They are a very humorous bunch. 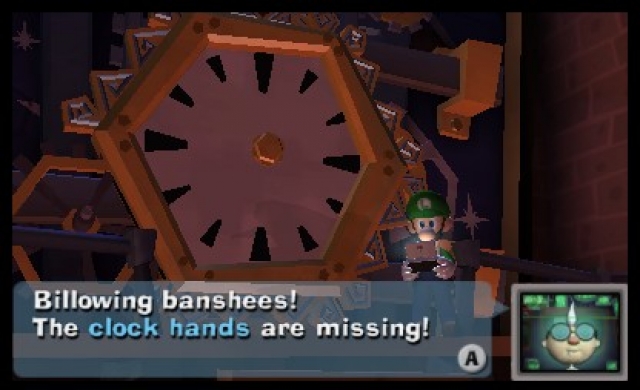 However, while the ghosts are good as groups, they do not have the individualism of the original game's ghosts. The past game's boss battles pitted you against ghosts of the people living in the mansion, and you could learn all about them based on information and clues from each room you visit. By contrast, you only have groups of mono-colored ghosts as your opponents here (even most of the bosses look similar to each other). Compared to the depth of the first game, Dark Moon's enemies are much more simplistic. You have your basic green ghosts, your tough guy red ghosts, sneaky pink ghosts, and Boos. They get the job done, but fans of the first game might feel some disappointment in their superficial nature.

Boss battles are the most inventive and intriguing part of the campaign. They take you out of the basic "stun ghost then suck it up" formula and give you new challenges. Some bosses combine puzzle solving into the mix and these mind teasers engage you much more than the typical combat situation. One boss, for example, can't be sucked up. To weaken it, you have to use fire, medieval statues, and spider webs creatively to damage it. In general, Dark Moon is at its best when it encourages more creative ways to fight the ghosts, and I wish the campaign would do this more often. 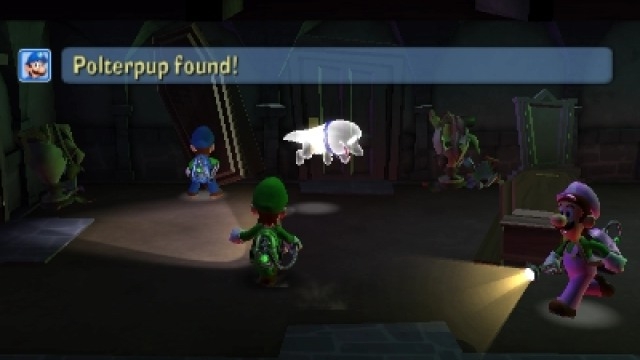 While single player is a bit lacking, Dark Moon's multiplayer adds a lot of fun to the mix. The ScareScraper multiplayer supports up to four players and comes in three different forms. Hunter Mode is for capturing all the ghosts as quickly as possible, Polterpup Mode tasks you to capture all the adorable Polterpups on each floor, and Rush mode simply asks you to find the exit before time runs out. Each mode can be played with 5, 10, or 25 floors, on Normal, Hard, and Expert modes. Multiplayer can be played locally, regardless of whether your friends have a copy of Dark Moon or not, and (I'm serious) online. Each mode contains a challenging boss battle every five floors.

It's remarkable how engaging Next Level Games managed to make these multiplayer modes. For a series that started as a single player-only romp, it works extremely well as a multiplayer adventure. You'll be bringing your friends together (or constantly logging online) to have another go at the ScareScraper, trying to defeat the ghosts and set a new personal record.

To succeed in these modes (especially on Expert), great communication is necessary. When the party gets split up and some get attacked by a gaggle of ghosts, cursed, or stuck with vases on their heads, everyone needs to come to their aid. There are generic phrases like "Hey!" and "Help!", but that isn't always enough online, where a lack of physical players makes it difficult in such trying times. Though it's great that the game offers online play (something that Nintendo games often eschew), it's clear that multiplayer was designed with local play in mind. 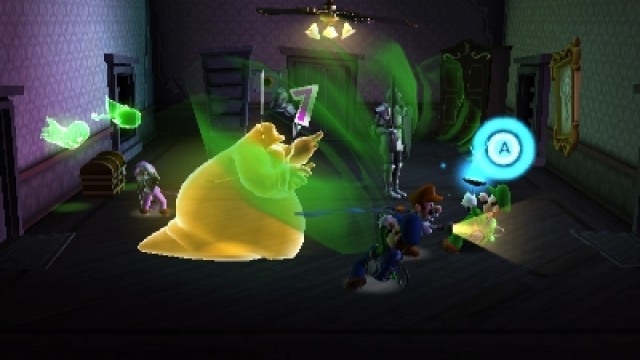 Alas, things in the ScareScraper do not always work as planned. Sometimes, the multiplayer glitches. A ghost doesn't spawn in a room when it should, leaving Hunter mode unplayable. A PolterPup, for some reason, doesn't come out of its hiding place when you examine it. I even experienced an incident where none of the items in a room could be revealed through blacklight (the game acted like they either didn't exist or it was already lit up). I noticed it seemed to occur often for a brief period, then go back to working perfectly (online server issues?) but it still happened a few too many times more than it should. It can be devastating if a glitch like this occurs on a high floor after a long play session, which could cause a player's frustration to boil over.

Dark Moon is a looker graphically, using the 3D to good effect. It helps you to perceive depth so that it's easier to target things that are closer or farther away. It can be tricky to target without it, especially when aiming at the ceiling, so that is a concern that players who can't see the 3D effect well need to be aware of. The audio has frequent call backs to Luigi's Mansion. Luigi hums along to the background music, Prof E. Gadd's Dual Scream contact device sings the Luigi's Mansion theme, and Luigi will say phrases if you touch the D-Pad.

Single player is a bit short. It only took me about 10 hours to complete the game, which included me investigating for collectibles. A few more hours could be spent going for 100%. Multiplayer, on the other hand, is very addictive and can make up for the lack of single player time, although with only three modes it may not offer much in the way of longevity for some gamers. 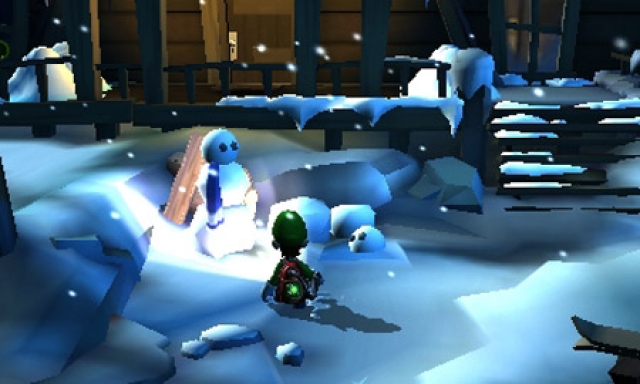 Luigi's Mansion: Dark Moon is a worthy successor to its GameCube predecessor. Though it changes some aspects of the series formula and the single player isn't as strong, the addition of multiplayer gives the game solid staying power. It won't be remembered as one of Nintendo's all-time classics, but Dark Moon is still a fun title that is worth a play.

This review is based on a retail copy of Luigi's Mansion: Dark Moon for the 3DS.