“There is only one thing that makes a dream impossible to achieve: the fear of failure.”

The Great Giana Sisters was a 1987 platformer that aped Super Mario Bros. so closely that it couldn’t have been coincidence – the first level was an almost exact rip off of Super Mario Bros.’s 1-1. After Nintendo threatened legal action, the game was removed from store shelves. Other than a 2009 re-imagining for the DS, that’s all this platforming series has been known for over the last 26 years. But now, Black Forest Games, thanks in part to Kickstarter donations, has created Giana Sisters: Twisted Dreams – a modern sequel that sheds the series of its copycat roots and carves its own spot in the platforming genre. 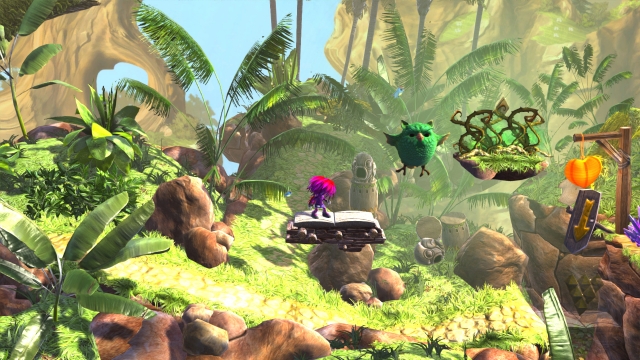 Starting up the adventure will give you the back-story: Maria is sucked into a strange dark portal, and Giana jumps in to save her (Okay, so that part is still like Super Mario Bros.). It’s this ominous beginning that brings Giana into the world of twisted dreams.

Twisted Dreams’s main gameplay mechanic is the shifting of worlds between “cute” Giana and “punk” Giana. Cute Giana is a blonde haired, innocent looking girl juxtaposed with a demonic twisted background. Enemies change shape into demons, poisonous frogs and other such malcontents. She has the ability to twirl in mid-air, which allows her to hover. In contrast, Punk Giana is a pink haired punk rocker girl paired with a colorful, beautiful background. Enemies become cuddly creatures like owls and rabbits. She has the ability to burst forward in any direction as a ball of flame, which serves both as an attack and her best method of mobility.

Both of these worlds are wonderfully drawn and animated. They show off both the light side of fun dreams and the dark side of scary dreams. Giana is able to switch between both worlds on the fly, and the instant change of the world from light to dark gives it that much more charm. Punk Giana experiences a louder, more rock-like version of the music in each level, while Cute Giana gets a quieter version. 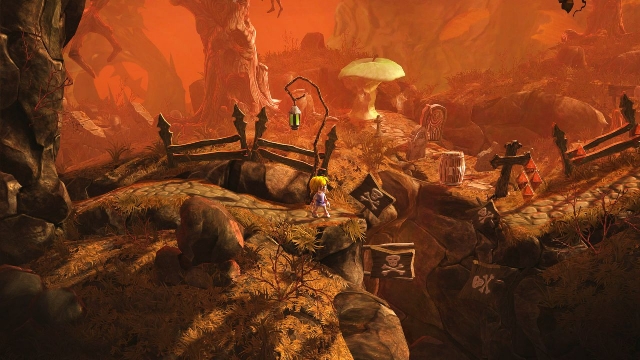 Like all platformers, the goal is to make it to the end of the level while jumping over perilous pits, obnoxious obstacles and formidable foes. While many games have gotten easier since the 1980s, Twisted Dreams thumbs its nose at that trend, producing one of the most difficult platformers in years. Crystal spikes are everywhere, poisonous water flows in abundance and enemies will all impede your progress every step of the way. You will die many times, starting as early as level 1-2. The presence of checkpoints is the only beacon of hope in this very difficult platformer. Twisted Dreams is a game that hatesyou. It wants you dead and will do whatever it takes to kill you, and it will never stop trying to murder you.

To master this challenging game, you will need to use the world-changing mechanic to great effect. Not only do backgrounds and enemies change, but platforms, doors, spikes, trampolines and even gems can disappear and reappear when you switch between worlds. When the going gets tough, you’ll be switching between worlds on the fly, several times during one jump or to avoid obstacles that only exist in one world. It is The Legend of Zelda: A Link to the Past’s two world mechanic on steroids, and much more deadly.

Boss battles serve as a test for what you have learned to accomplish in the game up to that point. They are difficult and grueling battles that require you to be on your toes. You’ll need to have your jumping and world-shifting skills polished, or else you’re going to get crushed (now there’s a difference from the Mario series; bosses will kill you. A lot). 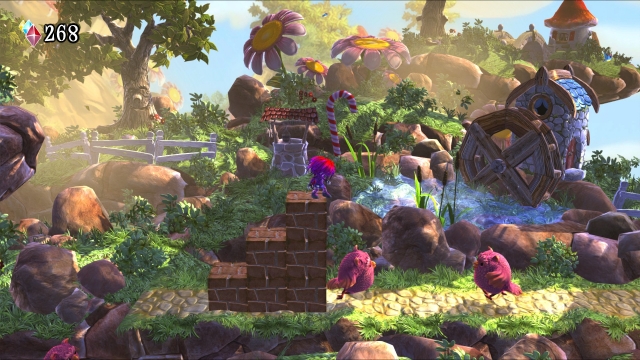 The controls in Twisted Dreams take some getting used to. Using the twirl or fire dash will cause Giana to switch to the proper form, which could disrupt your timing if you aren’t prepared. Additionally, Giana doesn’t wall jump in the traditional way; she can only jump a short distance away from a jumpable wall, so it’s more like climbing a wall (as seen in N+). To wall jump the “traditional” way, Punk Giana can bounce her way up with the fire dash. Giana also slides a tad when you halt her momentum, so running jumps onto tiny platforms can cause unfortunate drops. Thankfully, Giana is able to jump once in midair if she falls off a platform.

Another minor issue is that the backgrounds are so vivid that occasionally you will not see an obstacle in the level. And since any hit in this game means death, that can get quite annoying the first time through a level when you don’t know what to look for.

Adventure mode has about 30 levels and will keep players busy for a number of hours, especially those looking to collect every gem or unlockable piece of artwork. If that’s not enough masochistic pain for you, more modes are available. Time Attack is at its sounds: complete the level as fast as you can. Hardcore mode removes those life-giving checkpoints and Uber-Hardcore mode has one simple request: complete the entire game without dying. If you die, it’s back to level 1-1. It takes a special kind of gamer to relish the thought of such a challenge, but if that gamer is you then congratulations, this game will last you for a long time (also, you’re insane). At $15, the game is excellent value for platformer gamers. 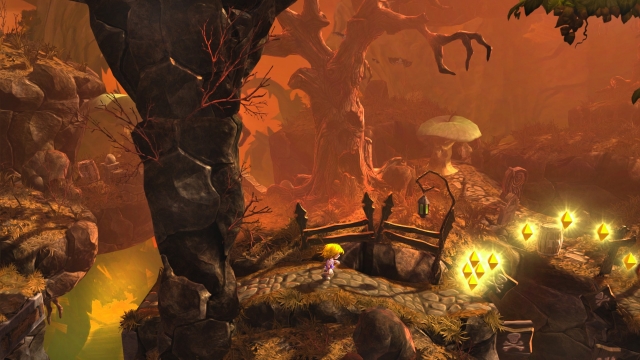 Giana Sisters: Twisted Dreams is not a game for beginners. If you are inexperienced with platform games, go find an easier title to cut your teeth on. This game caters to the hardcore, old-school platform gamers who have been practicing their skills for many years, or even decades, and it does that with aplomb. Finally, after all these years, Giana has found her own unique identity. She’s placed herself among the toughest games for a platforming fan to play and now, that little girl known for playing copycat has blossomed into an original that will delight anyone ready to put themselves to the test.

This review was based on a digital download of Giana Sisters: Twisted Dreams for the Xbox 360.