You've got to wonder why Mario doesn't take Luigi along on all of his adventures. The Mario & Luigi series has pit the brothers against various nefarious enemies in order to protect locales from Bowser and other villains, and it's been an engaging, hilarious romp each time. Now the fourth entry in the series, Mario & Luigi: Dream Team, has released in North America. After having explored Bowser's innards in the previous title, the series now enters Luigi's dreams, where Luigi stretches the limits of imagination and becomes a force to be reckoned with. The Year of Luigi continues with Luigi at center stage. 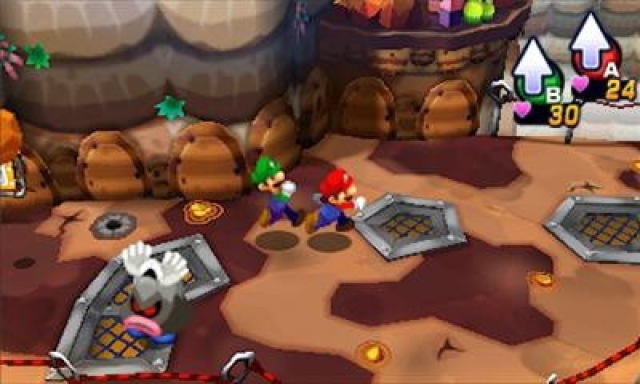 Mario, Luigi, Peach and company get invited to Pi'illo Island, a resort island where a researcher named Dr. Snoozemore is researching the wonders of sleep. It seems like a great vacation! Of course, things go wrong rather quickly, because every time Mario goes on a vacation, terrible events occur. So it's up to the brothers red and green to save the day once again, whilst beating up on enemies, jumping into blocks, playing mini-games and more.

Dream Team's gameplay is set up just like the previous games in the series. Mario and Luigi walk around the world, single-file, talking to characters, visiting shops, stomping on enemies and completing tasks. At the beginning of the game they can only jump, but they'll later acquire hammers and learn different kinds of movement that allow them to pass through obstacles such as narrow crevices and high platforms.

Battles also do not deviate much from past installments. Mario and Luigi stand on one side, with the enemies on the other. The brothers can attack by jumping, using hammers, or Bros. Attacks, which are more powerful attacks that consume Bros. Points. Such attacks include kicking a shell back and forth or hammering bombs into enemies. Collecting Attack Pieces (multi-colored puzzle pieces) in the overworld will unlock new Bros. Attacks. Enemies can also attack, but the brothers will get the chance to dodge or counterattack to avoid taking damage. 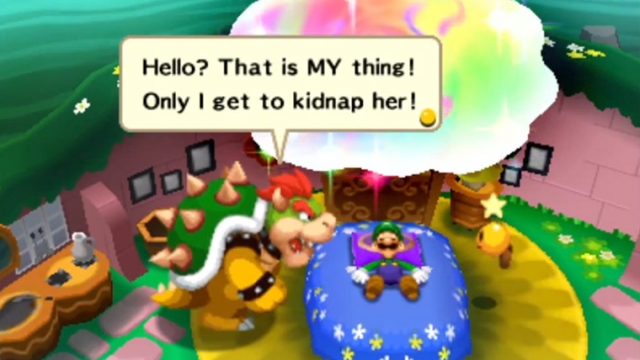 To deal more damage to opponents, you'll need to time your button presses effectively. Tapping the attack button when Mario or Luigi lands on an opponent during a jump will deal the most damage and net you an Excellent. Pushing the button when the hammer glows will have the same effect for hammers. Each Bros. Attack has differing timing requirements, so practice the attacks in the menu to learn them well.

One new change to Dream Team is the use of the 3D screen. Routinely, enemies will use attacks where they appear into the background and attack, or chase the brothers towards the screen. With 3D on, this looks great and immerses you in the battle, as you may see obstacles in front of you to jump over while the enemy lurks behind menacingly. The 3D effect also sees use in several Bros. Attacks when Mario and Luigi run vertically into their opposition.

The major plot point of Dream Team is Mario and Luigi discovering the Dream World. Luigi must sleep to open a portal to the Dream World, then Mario jumps in and meets up with "Dreamy Luigi" (the Dream World form of Luigi). In this world, Luigi can interact with the background with a Luigination move. He can jump into a constellation to create hundreds of Luigis and form a stack of Luigis, he can become a tree that can grab and fling Mario with his mustache, and he can change the temperature of the world, amongst other things. Many of the Luigination techniques require outside assistance from Starlow, the flying Bob-Omb (who previously appeared in Bowser's Inside Story). Using the touch screen, you can have Starlow interact with various parts of Luigi. Pulling his mustache will cause tree Luigi to fling Mario, touching his nose will cause Luigi to sneeze in the Dream World, and spinning him can even alter the direction of gravity. Different areas of the Dream World each use different Luigination powers, so you won't have to worry about having a spate of powers with no idea how to use them. 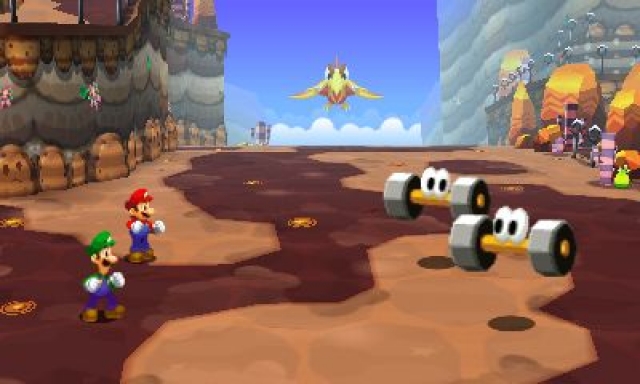 Battle works a bit differently in the Dream World. Dreamy Luigi merges with Mario to increase his HP. When Mario attacks, Luigi helps out. So when Mario jumps, a gaggle of Luigis then drop down on the opponent. When Mario uses the hammer, a row of Luigis pop out to cause a shockwave with their hammers. The Bros. Attacks become Luiginary Attacks, which take advantage of Luigi's ability to make many copies of himself within the Dream World. These attacks include rolling on a ball of Luigis, stacking up Luigis, or using the Luigis to bounce an increasingly large fireball. Like the Bros. Attacks, these also require the collection of Attack Pieces.

During the game the brothers will level up and receive stat boosts. A slot wheel then appears, which can be applied to any stat. Time it just right and you can receive up to a +5 boost to the stat you choose. At certain levels, the brothers will also upgrade their rank, from Mushroom to Shell to Flower and so on. At each rank upgrade, you get to choose a feat. So you can choose to have EXP increase faster, or have HP increase by +2 more at each level up, among various other choices. This helps you build Mario and Luigi in the way you want, giving you a bit more freedom than past Mario & Luigi titles.

Like many RPGs, Dream Team has various items that will both heal Mario and Luigi and also items that can cause damage. There are also various pieces of gear (overalls, gloves, accessories) that can increase stats as well as grant various bonuses, such as restoring HP every turn or boosting your power whenever you take damage. You can mix and match your gear to match the play style you desire. 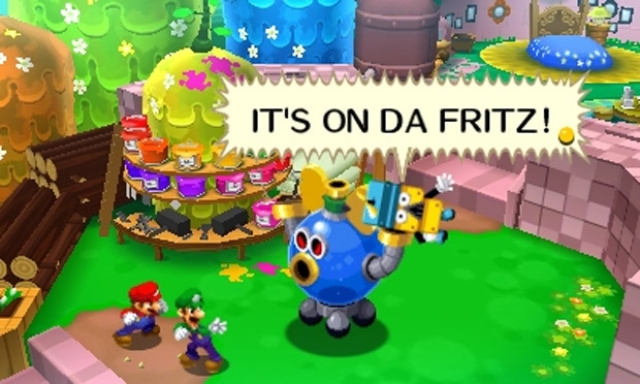 Badges, a staple of Mario RPGs, are back in Dream Team. Each brother can equip a few badges at a time and then you rotate each brother's badge wheel to select a primary badge. Combining different badges will cause a different special effect. Some can heal, cure status effects, do a boatload of damage, decrease enemy stats, increase Mario and Luigi's stats, and so on. Experiment with badge combinations until you find the one you like best. Once you've chosen a badge duo, you'll fill the badge meter by attacking enemies. Your performance in-battle affects how fast the meter fills (achieving Excellents in battle will increase it faster). When the badge meter fills, an icon appears in your badge slots on the bottom screen that, when tapped, will unleash the promised effect from your badge combination. Note that you only have two of these slots, so if you fill the badge meter for a third time, one of the badge slots will be overwritten.

Mario RPGs, whether it's the original, Paper Mario, or Mario & Luigi, have become famous for hilarious scenes and dialogue, and Dream Team is no exception. It's a game that will keep you amused and laughing throughout the adventure. It also features cameos from previous games, even going all the way back to 2003's Superstar Saga. Bloops and bleeps are used for dialogue, while the music for the game is good and fits the tone of each world. Developer AlphaDream also decided to use 2D pixel art for Dream Team and the result is very crisp, detailed characters. It's certainly a step up from previous games, and they look great in stereoscopic 3D.

Dream Team has a lot of things going for it, but its major flaw is pacing. The first few hours are very slow and unenjoyable as the game introduces the story and teaches you the abilities you'll need to know. It's not the first time the series has done this, but Dream Team's definitely the biggest offender of the group. The middle portion of the game is fine, but the last few hours will again test your patience, as the game primarily becomes a fetch quest that you must grind through. The campaign will run about 20-30 hours, depending on how much attention you spend on side quests such as item trading and bean collecting, so when the beginning and ending few hours drag on, it adds up to a sizable amount of the game feeling like you're simply going through the motions instead of pure enjoyment. 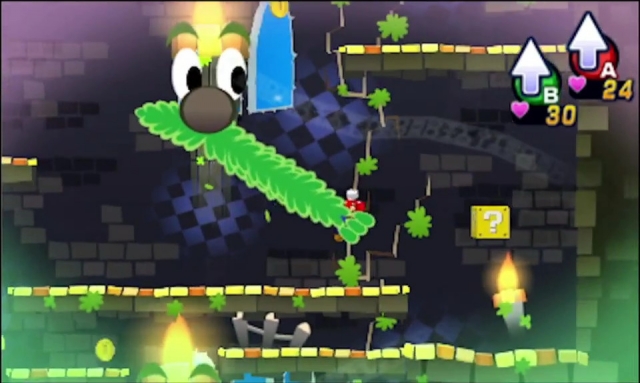 As a whole, Dream Team takes the well-established formula of the Mario & Luigi series, adds a few new enhancements and creates a solid new adventure for fans to enjoy. It doesn't change much, so those who didn't like other Mario RPGs won't be swayed this time around either, and the poor pacing that bookends the campaign can become frustrating. But Dream Team is a good RPG that shows some vivid imagination and fans of the series won't be disappointed.

This review is based off a retail copy of Mario & Luigi: Dream Team for Nintendo 3DS.