The year will likely be looked back on as the Year of the Platformer. By the end of December, it will include Rayman Legends, Super Mario 3D World, Giana Sisters: Twisted Dreams, Donkey Kong Country Returns: Tropical Freeze and several others. But there is one more platformer that is about to release for PlayStation 3 that you'd be well-served to have on your radar. That game is a lovable, hilarious little romp called Puppeteer. 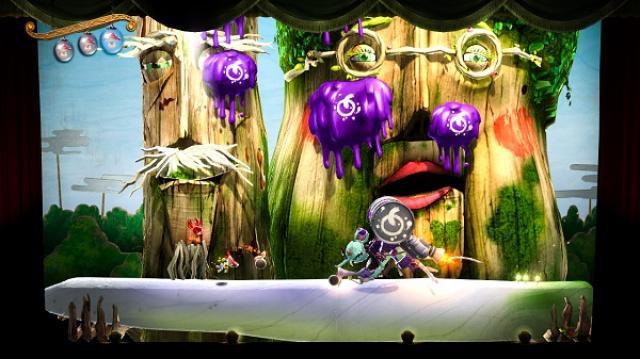 Puppeteer tells the story of Kutaro, a boy who is captured by the Moon Bear King and loses his head. But that's not the end of Kutaro, as he steals the Moon Bear King's magical scissors called Calibrus, gets a new head, and becomes a powerful opposing force. Throughout the adventure, Kutaro will visit various worlds and encounter many strange characters, each with their own tales that Kutaro is thrust into.

Unlike many popular platformers, Puppeteer emphasizes its story heavily. Kutaro's life is a stage - literally. The game takes place within the confines of a Japanese stage. Between platforming segments, other characters will have their time in the spotlight to set up their storylines. Characters and events in the scenery can occur both in the foreground and background and switch between them. There will be narrative scenes not only between levels but during the levels as well. They set up an intriguing but also hilarious story (the fourth wall is bruised, battered and beaten). As a result, some gamers might become bored of having so many non-playable segments between short bursts of platforming, but I do urge all players to stick through it, as these scenes are what give Puppeteer its unique charm (if you still want to move past the narrative scenes, simply push Start and select Skip).

But enough about story, let's talk about the running and jumping! Though Puppeteer has an artistic vibe similar to the LittleBigPlanet series, Kutaro does not have the oft-maligned floaty jump of Sackboy. He has a short quick jump and a quick falling motion which allows for precise jumping and landing and is very easy to adapt to. Kutaro cannot run, but he can use the L2 button to roll forward, akin to the rolling maneuver in the Donkey Kong Country franchise. 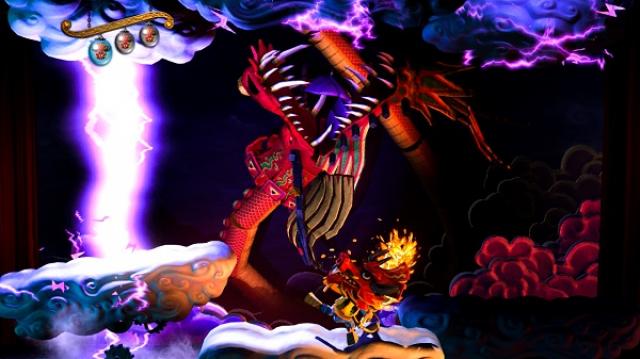 Also joining Kutaro is a flying companion who can be moved around the screen with the right thumbstick. The R2 button lets the companion investigate whatever it is hovering over, which often reveals Moonsparkles, the yellow gems that function as the main collectible. Grabbing 100 of them earns Kutaro an extra life. A second player can take control of the companion with either a normal controller or the PlayStation move. If you can wrangle in a second player, that makes the game a little easier, since manipulating the companion character on the run is awkward and your other option is to stop in your tracks for a few seconds.

Throughout the game, Kutaro picks up various heads shaped like familiar objects or animals, such as sushi, burger, octopus, and taiko drum. These heads function as a life bar of sorts - if you get hit, your head rolls away and you must pick it up within a few seconds or the head is lost. You can hold up to three heads at a time, and if you run out of heads, you lose a life. There is also a different group of heads that give you permanent power-ups, such as the ninja head that lets you throw bombs and the pirate head that enables you to shoot a chain and latch onto hooks.

During levels, you'll sometimes see pictures of specific heads on the background. If you have that head in your inventory, switch to it with left/right on the D-Pad and then push down on the D-Pad; you'll perform a special head move that unlocks a secret. That could be more Moonsparkles, a new passageway, or even a bonus stage. 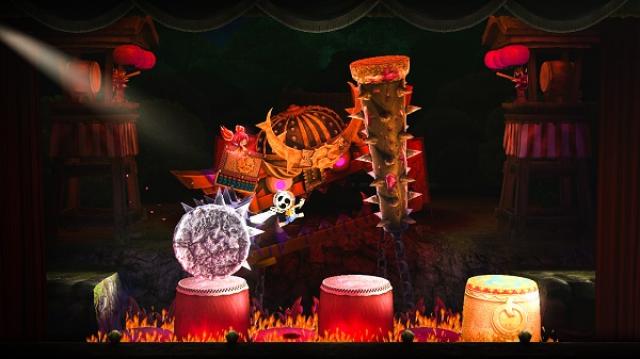 The Calibrus scissors are Kutaro's main form of combat and are controlled by the Square button. A tap of the button will result in a basic cut, but you can angle the cut with the left stick. This is more interesting in the air as you can cut through fabric and seams while airborne as a form of transportation, allowing you to snip your way to new heights and across chasms. The game is at its best when it is offering inventive ways to move about the level using the Calibrus. It also sees heavy use during boss battles, which generally involve dodging attacks, taking advantage of a weak point, traveling up cloth with the Calibrus and then cutting the cloth away from the boss. One thing I didn't like about the boss battles is that many of them use quick time events, so stay on your toes, even when you think you've won.

I mentioned the emphasis on story earlier and how it oozes charm. Part of that is from the fun dialogue, where many of the characters are completely hamming it up, and they'll definitely bring a smile to your face. The art style matches what you'd expect of a wacky puppet show and the music coordinates with your location to immerse you. Few platformers have been able to sell an environment and story as well as Puppeteer does.

There are seven "Acts" (worlds) in Puppeteer, and each Act contains three "Curtains" (levels) to play through. The game occasionally poses a challenge, but seasoned platforming gamers may find Puppeteer a bit too easy. To complete the game will take about 10-15 hours, which is a solid length for this genre. You can earn picture books from each level that tell the story of a fairy tale, Puppeteer style, but otherwise the game has sparse extras available. Fortunately, Puppeteer is launching with the budget price of $39.99, which offsets the lack of features somewhat. 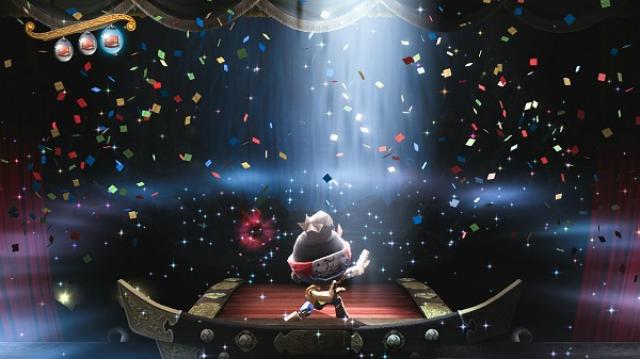 Puppeteer brings to the table two things that you don't always see in a platformer - an intriguing narrative and an imagination that runs wild. The game's scissor cutting mechanic puts a new twist on the standard platformer and makes it just as worthy of attention as this year's other platforming titles. Puppeteer closes the curtains on the PlayStation 3, but everyone who plays it will shout "Encore!"

This review is based on a copy of Puppeteer for the PS3, provided by the publisher.