If you like platformers, I doubt you have a lot to complain about over the last generation. The combination of great games from major franchises and introductions to new awesome indie games has made the platforming fanbase well-satiated. Perhaps no game in the genre was given more adulation than Rayman Origins. Adored for its tight gameplay mechanics, ample challenge, beautiful 2D graphics, and zany sense of humor, Origins rocked platforming fans with a fresh feeling of youth. Perhaps more amazing is the fact that Rayman Legends manages to better it in every way.

If you're looking for some plot set-up for this game, you'll find about as much as you would in your average Mario title, that is to say basically none. Rayman and friends have been asleep for a century and while they were away the Magician from Origins has been wreaking havoc on the world. It's up to our heroes to rescue the 10 princesses (playable characters themselves) and restore the world from the nightmares.

While the story may not matter, the mood and tone certainly do, and Legends oozes style. Gorgeous characters, levels, and music punctuate a sequel that somehow manages to be simultaneously familiar to Origins fans but wholly original. The ridiculous humor and zany character designs are wholly intact. They are backed up by visuals even more gorgeous than its predecessor and a soundtrack for the ages.

Never fear, Rayman Legends is just as much substance as style. While controls may be largely unchanged from Origins, the platforming itself has advanced considerably in creativity of design. Rayman runs, jumps, glides, and punches, and that's all he really needs to do. That may sound simple, but the level design is anything but. Stages in Rayman are living, shifting things, and often require great reflexes and quick planning to succeed. Generous checkpoints and infinite lives will keep you pushing onward, but don't expect to ever feel like the game is easy. Some of the levels will push even the most hardened platforming expert, but in the best possible way. The challenge never feels cheap, and completing a difficult stage makes you feel like a rock star.

Speaking of rock stars, Legends is more than ready to rock you with some very different stages. One of the most hyped is the rhythm platforming music stages. There are twelve of these in the game featuring everything from hard rock to orchestral tunes, and 8 bit remixes of them in a special unlockable world. Invasion levels send you through remixed versions of already played levels on crazy speed runs with new enemy layouts. Counting 40 remastered and retooled levels from Origins, Rayman Legends features more than 120 different stages, an incredible amount for any platformer.

Unique to the Wii U version are Murphy controlled stages, in which the player switches jobs to protecting an AI platformer and guiding him through the level using touch controls on the gamepad. These stages are very fun, and provide a welcome break from the pure platforming segments. The design features are just as clever as you'd expect from the traditional platforming, and range from clever manipulation of the environment to shooting slingshots at passing dragons.

As fun as these stages are alone (and believe me they are), they weren't designed for just one player. Murphy's assist mode is really highlighted when playing with a friend. Having one player use the gamepad and the other progress via platforming is one of the most entertaining local multiplayer experiences I've ever had as a gamer. The game had us shouting, laughing, and sometimes crying like we were kids again, and I can't endorse it strongly enough. If you can play this with a friend, please do!

While the game does allow for up to four players simultaneously, I found that to be a bit too much to successfully advance within the active and hectic levels without players regularly dying. Two players was the sweet spot for both success and fun, but Legends is still very enjoyable with three or four, especially in a party environment. Online multiplayer isn't present (nor would it be particularly enjoyable if it were), but there are some strong online features nonetheless. Both daily and weekly challenges are available in Rayman Legends, and completing these challenges ranks you in worldwide leaderboards and against your friends. Your position relative to everyone else who competed determines whether or not you are rewarded with a trophy and how high your “awesomeness level” is. As your level gets higher you can access even more challenge stages.

And I hope you enjoy positive feedback, because Rayman is full of it. Things are constantly unlocking as you play through the game. Gathering Lums will help you unlock new characters, while gather Teensies will open new levels. You can earn two separate trophies in every level (one for collecting all Teensies and one for getting enough Lums), along with a Lucky Ticket, and boy are they ever lucky. Every Lucky Ticket is a winner, and they all unlock fun and useful parts of the experience (they are also the only way to unlock Rayman Origins levels).

Plenty of use is made of Nintendo's Wii U GamePad outside of just Murphy's stages. The GamePad allows for quick navigation around menus, and pops up with new notifications as you unlock things. It can also be used to post screenshots and leaderboard stats straight to Miiverse. You can play the game entirely off the TV if you wish, which is a feature I find I use on the Wii U far more than I expected. The Lucky Tickets are “scratched off” on the touchscreen as well, which is way more satisfying than it has any right to be. If you're concerned about control options never fear, as the Wiimote, Wiimote + Nunchuk, Classic Controller, and Wii U Pro Controller are all supported.

If all this sounds like a lot of game, that's because it is. Just unlocking and completing all the original stages requires a solid 8 hours, but you'll spend at least 20 completing everything from Origins levels to Invasion runs. 100% completion, collection of everything available, will take even longer, and daily and weekly challenges and evergreen multiplayer experiences will keep you in it for the long haul.

It's hard to say what this game would have been without all the delays and the multiplatform development release, but it's hard to imagine it could have been any better. Rayman Legends is a master platformer, with variety and style that could even make Nintendo's iconic plumber stand up and take notice. The Wii U version is the definitive experience, offering more variety, smoother menus, and an outstanding multiplayer mode that can't be found on other platforms, but it's a great game on any device. If you play games to have fun alone or with friends and need a break from the serious business of the shooters and action games that dominate the holiday lineup, you can't fail with Rayman Legends. 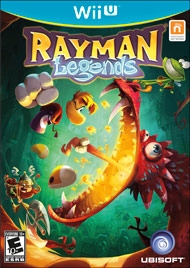