Who knew that playing a video game as a lawyer could be so deep, enthralling and hilarious? I doubt anyone knew that before the Ace Attorney series arrived on our side of the Pacific. Now every Ace Attorney game is celebrated by its small but devout fanbase. Dual Destinies is the first main series title to reach the West in nearly six years, and while some are upset that this game is a digital exclusive to the Nintendo 3DS eShop, the game has not suffered at all from this. In fact, with new 3D character models, breathtaking art and a wacky, compelling story, Dual Destinies may be the best Ace Attorney game we've ever gotten the chance to play. 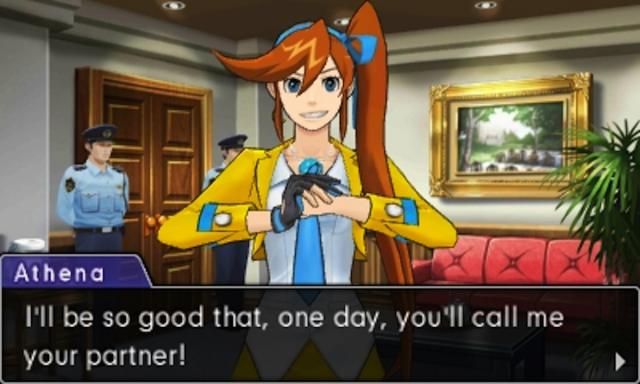 Dual Destinies takes place about a year following the events of 2008's Apollo Justice: Ace Attorney. Famous defense attorney Phoenix Wright has returned to the courtroom after a long absence, but the onus of the story is on his two young disciples, Apollo Justice and series newcomer Athena Cykes. Together, this trio of defense lawyers take on tough cases, challenging prosecutors in the so-called "dark age of the law", where prosecutors and defense attorneys are willing to fabricate evidence and slander witnesses, all in the name of winning the trial. Each case is full of fun characters, twists and turns, and heart-wrenching moments. Explaining in more detail would spoil the experience, but I can tell you that Dual Destinies is an amazing ride and as long as you can handle some over-the-top zaniness and punderful names, you're going to enjoy it. 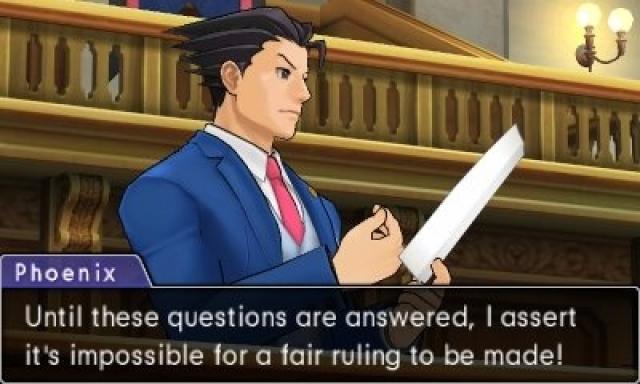 Like past titles in the series, Dual Destinies shares many common grounds with the point and click adventure genre, which is most notable during the investigation phase. Phoenix and crew will need to play detective at the crime scene, investigating everything at the scene, gathering evidence and trying to figure out what happened. Dual Destinies throws a curveball here by only allowing investigations in certain locations and clearly letting the player know when everything of importance has been examined. This change is both good and bad: it streamlines the investigation experience and makes it more difficult to get stuck because you forgot to pick up a piece of evidence or talk to a witness, but it also reduces the amount of funny banter between the characters as they examine the scene. That said, the dialogue that is present is still top-notch, so it's an issue that most fans will be able to get over.

Another integral part of the investigation portion is talking to people. They will give you the information you desperately need to stand your ground in court, but not always so willingly. Some witnesses will need to be pushed through presenting evidence, or breaking their guard if they are hiding an important secret. The defense trio have special abilities to help in this, for example, Phoenix has the Magatama, a spiritual item that lets him see the locks around a person's secret and lets him break them. Apollo's bracelet detects lies and allows him to concentrate and pick up on a person's subconscious movements (this ability can also be used in court). The abilities are scripted and can only be activated at certain times, so there's no chance of breaking the game by using them on everyone you see. 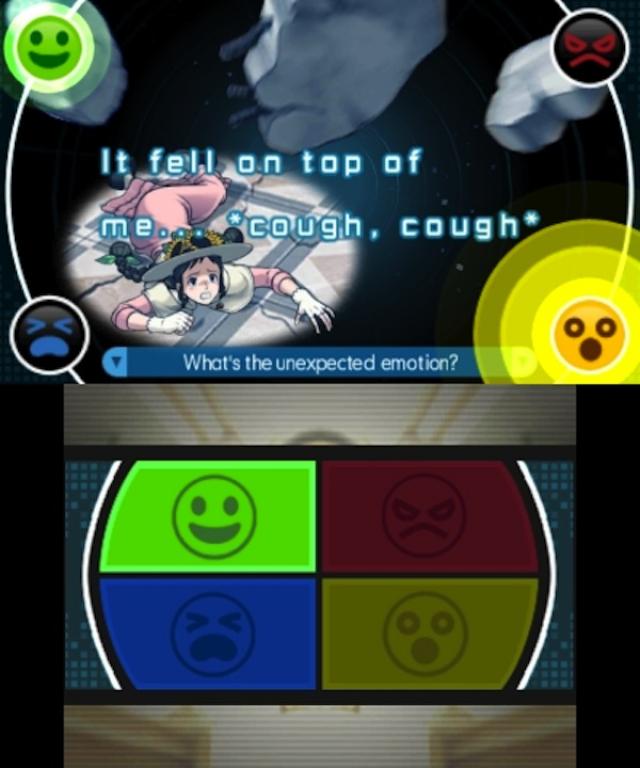 Where the series gets its fame from, however, is in the courtroom, and Dual Destinies thrives here as well. The defense trio must present their case against the powerful prosecution, who often have more influence over the judge and put the defense in a severe bind time and time again. To fight back, you will need to master the cross-examination, where a witness testifies about the crime and the player must poke holes in their testimony. This is done both by Pressing statements to get more information and Presenting evidence that contradicts the testimony. Exposing contradictions will bolster your case, while presenting evidence or making the wrong choice could cost you a penalty in your life bar. Once that bar is depleted, it's Game Over and you have to reload your last save. Fortunately, Dual Destinies lets you save at any time, so getting a Game Over shouldn't hurt you much.

Special abilities also come into play during trials. Apollo's aforementioned bracelet power can be used at certain times, but the big new addition to the series is newcomer Athena's ability to read the emotions of witnesses. When Athena uses her ability, she can detect the emotions behind each statement in the testimony. There are four categories - green is for happiness, red for anger, blue for sadness or fear and yellow for surprise. Pinpointing which emotions are out of place in the testimony (or which emotions should be present but aren't) can break a witness even when their testimony would otherwise be airtight. This puts the cross-examination in a whole new light, making you think differently about the witness's testimony than in any prior Ace Attorney game. It's a much needed breath of fresh air that breaks the pattern of "press this, present that", yet also manages to not feel out of place. 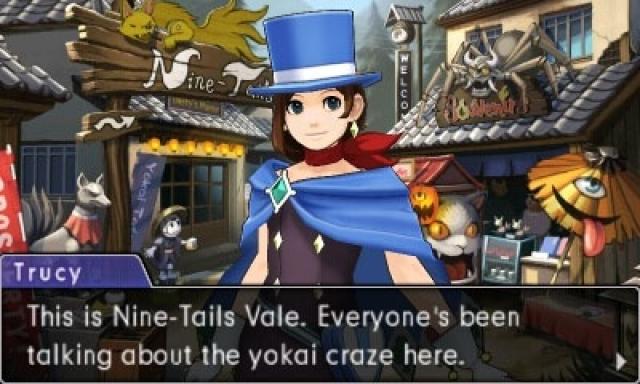 Ace Attorney has, until now, been presented with 2D sprites and backgrounds. Dual Destinies introduces 3D models, and while it may take a little time to get used to the new looks of familiar characters, it soon becomes apparent how much better they are in 3D. Characters now feel more alive, as they move around, fidget, and have fluid facial animations. Instead of switching between different still pictures, each character is more dynamic than they've ever been and it makes Dual Destinies the most visually pleasing title in the series.

Also adding to the visual pleasure is the 3D effect. The characters pop out in front of the backgrounds to clearly show the depth of the world. You can see the witness behind the witness stand, who is in front of the courtroom door, which is to the side of the crowd. Certain scenes will feature items coming out of the screen at you (such as an item being stuck to the head of the character you're playing as). It's simple presentation but it's done so well that I highly recommend playing with the 3D on if you're playing this on a 3DS. 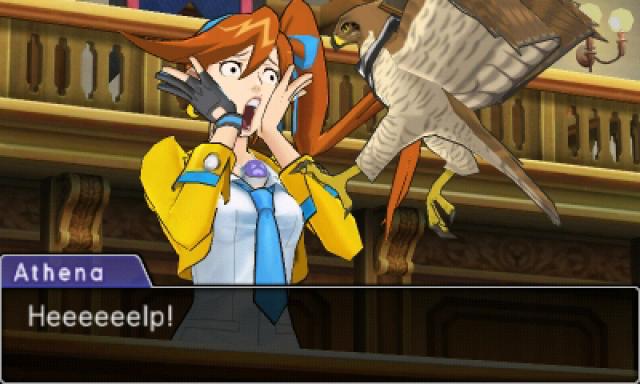 Cut-scenes with voice acting make their debut in the series. They are short videos that are dispersed throughout the game at key moments and let you hear the characters speak instead of the normal text-only experience. They're interesting, and almost bizarre if you've gotten used to the text adventures in previous entries, but they're a nice addition. The soundtrack is once again a strong point, as it features slow, melancholy tunes for sad moments, happy tunes for fun times and powerful tunes for big moments. There are numerous new songs in Dual Destinies but also re-worked versions of old songs, such as Apollo and Phoenix's cornered themes.

Dual Destinies is short length and lacks replayability, like most adventure games. A typical playthrough of the game's five cases may only last about 10 hours, perhaps shorter if you're good at solving mysteries. Yet the ride the game takes you on cannot be understated; sometimes the shortest games can become the most memorable, and Dual Destinies is a member of that group. The game also lets you view the anime cutscenes and illustrations upon beating the game, and a new costume for Phoenix, Apollo and Athena which will be free until November 7th. An extra case has been promised as DLC for the future, which would be the sixth case of the game, making Dual Destinies the longest title in the series. To top it off, the game is being sold for $30, a slight discount from most other new 3DS titles. 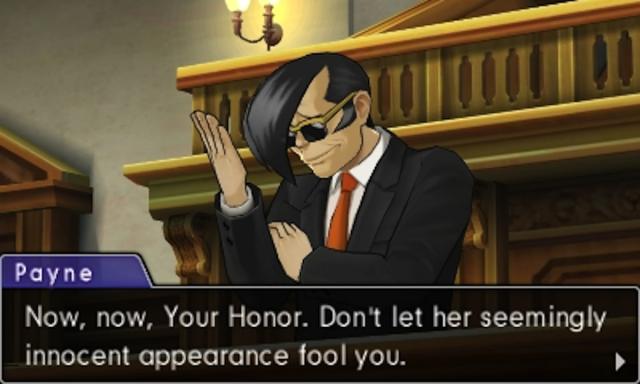 Phoenix Wright: Ace Attorney - Dual Destinies brings loyal fans back to the universe they know and love while welcoming newcomers better than any game before it. The upgrades in both gameplay and graphics are much appreciated and, coupled with yet another engaging storyline, help make Dual Destinies the best in the series. This isn't just a game for fans and adventure gamers, this is something everyone can pick up and thoroughly enjoy.

This review is based on a digital copy of Phoenix Wright: Ace Attorney - Dual Destinies for the 3DS