Coming in to 2013, Sonic the Hedgehog was on the rise. With the successful and enjoyable releases of Sonic Colors and Sonic Generations, it had become okay to have faith in the blue blur after years of catastrophic failure. So when Sonic: Lost World was announced, there was more joy and hope in the pre-release build-up than for any Sonic game in the last seven years. Unfortunately, darkness has set in, as Sonic: Lost World disappoints on a number of levels and takes several steps back from the heights of Sonic Generations. 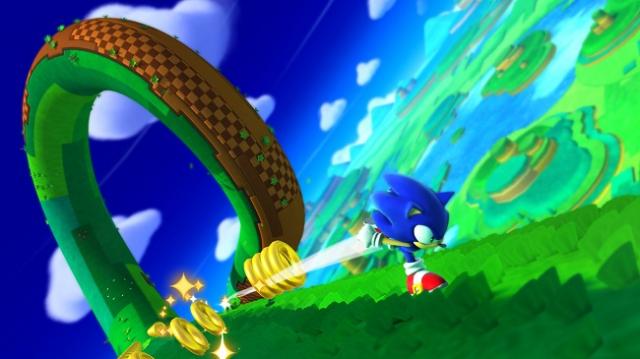 Dr. Eggman has hatched his newest nefarious plan; he intends to use the power of six powerful monsters, the Deadly Six, to defeat Sonic and bid for control of the world once again. Sonic and Tails won't allow this, and they chase Eggman down. After a turn of events, the Deadly Six become uncontrollable and revolt, meaning Eggman and Sonic must unite to end the Deadly Six's reign. There are short cutscenes after every level or two that progress the story, and while they're nowhere near the level of a literary masterpiece, they are very good at being corny (sometimes even funny!) and keeping things light-hearted, even during the darker portions of the story.

Sonic: Lost World takes several pages (more like several chapters) out of the Super Mario Galaxy playbook, offering levels filled with various ovular and spherical planetoids. Sonic can run on all sides of these planetoids and doing so can reveal different paths with different obstacles and collectibles to pick up. It also includes some auto-running segments and 2D platforming portions more akin to past Sonic titles.

Controls for Sonic: Lost World shake up the series' status quo. Pushing the control stick now only makes Sonic walk - you'll need to hold ZR to make Sonic run. While running, Sonic can run up or along walls for a couple of seconds, allowing him to keep running unabated by most obstacles. You'll use either A or B for your jumping needs. While in mid-air, you'll automatically lock onto nearby enemies, at which point pushing the jump button will unleash Sonic's signature homing attack, or pushing Y will have Sonic kick the enemy (with the button executing a bounce attack when not locked on). Lost World adds a double jump, which adds more jumping distance but takes Sonic out of ball form and makes him defenseless and unable to attack. There's a risk/reward trade off here. Holding ZL will make Sonic enter the Spin Dash, and tapping B repeatedly will charge it up. It will be disconcerting for series veterans to adjust to these new controls. In particular, the Spin Dash being moved to the opposite side of the controller made me forget about the maneuver for most of the game. It shouldn't be as big of an issue for new players who don't have Sonic's past control schemes committed to muscle memory though. 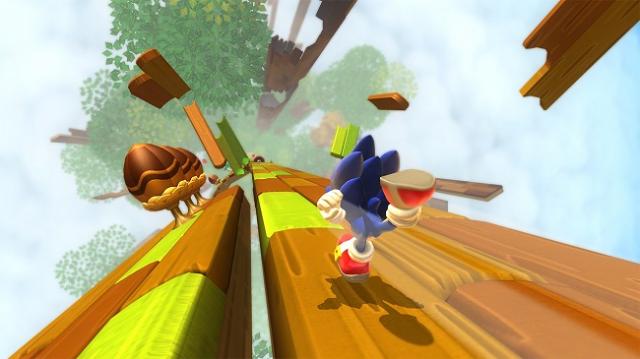 The Wisps from Sonic Colors make their return in Sonic: Lost World, but where they were once a fun addition in Colors, they become a hindrance and momentum-killer in Lost World. To activate them you tap the Wisp icon on the GamePad's touch screen and then you get brief instructions on how to manipulate the GamePad to use the power. Some require aiming or drawing on the touch screen while others use the gyroscope and accelerometer to move in any direction. The problem with this is that everything has to come to a screeching halt to use the power, as the game pauses and you must complete the quick, menial activity for just two or three seconds of gameplay, followed by another pause telling you to look back at the TV screen (only the drill power subverts this pattern). Second screen features work best when they complement the main screen's gameplay and contribute to the experience, while Lost World's second screen implementation is the gaming equivalent of a blissfully unaware bird flying straight into a sliding glass door.

Those looking to play the single player mode with the Pro Controller will be out of luck; it's GamePad or bust. While it makes sense that this was done to use the GamePad screen for Wisp play, it didn't have to be that way, as it could have easily been made to use traditional button controls if a Pro controller is enabled. The Pro Controller can only be used in multiplayer mode, which is a baffling decision that simply boggles the mind.

During levels you can use items that you collect either through gameplay or from other players via the "Wisp Away" Miiverse feature. These items range from a ring boost, to super speed, to five additional lives. They can help out players in a bind and can easily be ignored by players preferring an item-free experience. Struggling gamers may want to take advantage of the wing power-up which can be used either as an item or as a power-up that appears at checkpoints if you die too many times in a row. 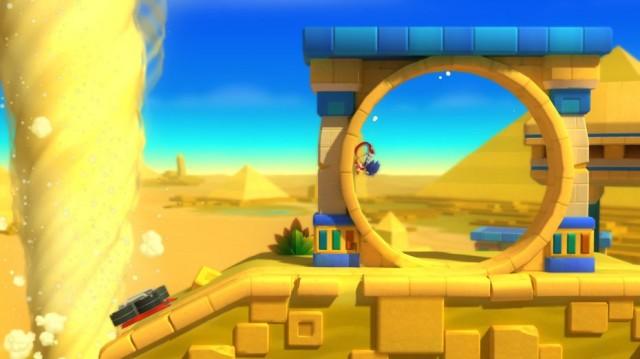 When everything is clicking, Lost World is a blast to play, but the problem here is consistency. Lost World's level quality lacks consistency. One moment you're enjoying parts of a level but in the next moment, you get tossed into a very difficult section, or a bunch of enemies show up to impede your progress, or you're thrust into a gimmick and given very little direction as to what is expected of you. Levels can get challenging, but not always in the fun way. Sometimes it just throws you for a loop without warning and getting through these sections feels more like a chore than learning to conquer a tough obstacle. It's this constant switching between fun play and poor level design that makes the game almost worse than a bad game, which at least has the courtesy to not tease you with bits of greatness and allows you to adjust your expectations downward accordingly. Lost World made me think several times it was going to turn the corner and become a great experience, then it jerked me back into the depths of despair.

Visually, however, it doesn't elicit such feelings of disappointment. Lost World is a very nice looking game that shows off its stylish settings, from the green hills, to the sandy deserts, to the snowy casinos (yes, the casino and snow levels get fused together). It also looks impressive when played on the GamePad through Off-TV mode. The soundtrack also introduces some catchy new songs that you may find yourself humming along with during the game. The voice acting isn't great - though it's not terrible either - and with the short length of the cutscenes, it doesn't end up becoming much of a factor.

Like most recent Sonic games, you can breeze through the levels in about 10 hours or less if that's your only goal. Lost Worlds has additional acts per world so it is a bit longer than the past few series entries. Each act also has five red rings to collect, often in challenging locations that will test the experienced platforming gamer. Lost World has a Miiverse feature in which you can "Wisp Away" items to other online players, which they can use in their game. You can only wisp away an item once every 48 hours, which is a rather long time since the game is short enough to beat without getting the chance to wisp away an item more than once.

Multiplayer modes exist, but are rather underwhelming. Co-op mode allows one player to play as Sonic while the other uses a Wii Remote to control a helicopter that drops bombs, which should thoroughly bore the second player. It also includes two-player race mode, which is passable, but not particularly memorable. 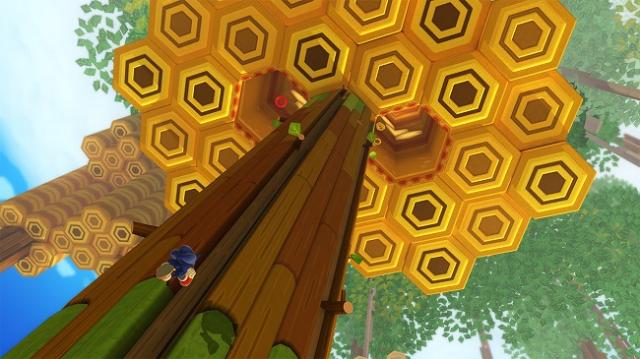 Below this paragraph, you can see the score I gave to Sonic: Lost World, but it doesn't tell the full story of this game. Lost World is at times great, at times awful, and sometimes in-between these two extremes. Ultimately, by the end of most levels, you're left with a sour taste in your mouth from the perplexing mix of highs and lows. It is an unfortunate reminder of the struggles of 21st century Sonic titles and may have started a new cycle of series mediocrity.

This review is based on a retail copy of Sonic: Lost World for the WiiU