If I had to hazard a guess at which franchise I've spent the most time playing this past generation I'd have to say it's probably EA's skate series. Having been an utterly terrible skateboarder in my youth I loved the sense of challenge yet attainability I got from these games. Little in video games has made me feel as accomplished as the first time I did a blunt slide in the original skate. OlliOlli doesn't quite achieve the same feeling, but it works well within its constraints as a 2D title while reminding me what I really loved about EA's franchise. 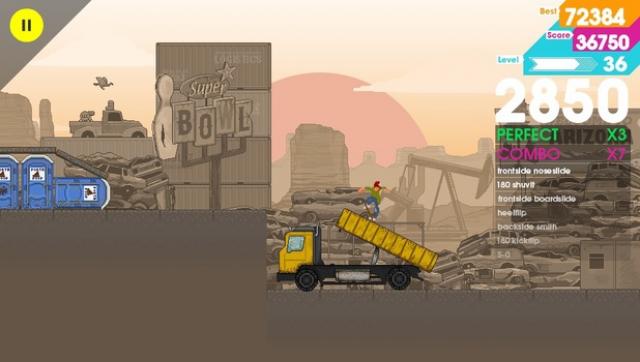 The developers, Roll7, have pulled few punches when it comes to OlliOlli's gameplay design. Most of the time you'll be using the left stick to pull tricks and the X button to land. The amount of points awarded for any given trick or combination are largely dependent on how you land it at the end, so the importance of your timing can't be understated. If you don't time your landing well you will get a 'sloppy landing', in which your skater loses their balance for a moment and can easily careen into an obstacle and end your run. Falling at any point during a level, incidentally, will bring you all the way back to the beginning and reset your score to zero.

OlliOlli is all about attaining that one perfect run. Just getting to the end of a stage will unlock the next one, but if you really want to test your skills you have to complete five objectives for each level. These include things like getting a single combo of a certain value or grinding or grappling certain distant obstacles. Succeed and you'll unlock pro mode, which features an increasingly difficult level layout and challenges you to complete it in certain ways (such as only performing perfect landings or not pulling off a trick/combo below a certain points value). Complete all of these for every level and you can unlock Rad mode, which is even more stringent in its requirements for landing a trick. 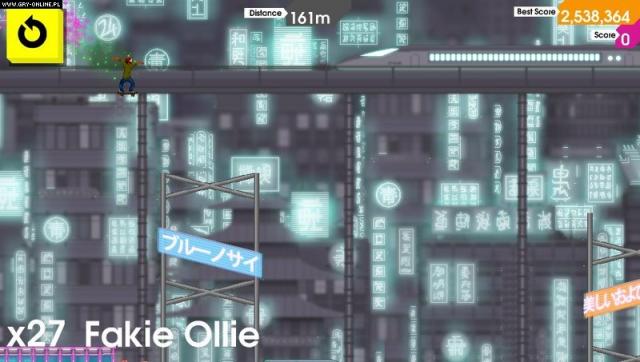 Flip tricks are performed using a similar technique to the “flick it” controls from the skate series, whereby an analog stick is used to prepare and start every trick. Once in the air you can spin with the L and R buttons, but it's important to keep your timing in mind as you can easily overdo the spins and miss the next landing or grind. Probably the most difficult part of OlliOlli is learning when to use each flip trick, as the time it takes to get back to neutral and be ready to grind varies wildly. This means the first time you go through any level you should probably just stick to the basics, since you won't know what's coming in time to adjust. It can be a little infuriating when you accidentally complete a more complicated trick than you intended and it ends your run prematurely, but this isn't too common. Grinding is achieved using the left analog stick as well, and you can complete more complicated grinds by adding in the L or R button. Grinds are largely interchangeable, except for the blunt slides, which slow you down much more than any of the others.

Probably the perfect example of OlliOlli's gameplay philosophy is the Daily Grind. Every day a spot is put up as a challenge and whoever can get the highest single combo wins. There's a catch, though. In similar fashion to an actual skating competition, while you can practice as much as you like, once you decide you are ready you only get one chance. Screw up and you'll have a big fat goose egg for the day. It's a lot of fun and I could definitely see myself coming back every now and then just to give the Daily Grind a shot. 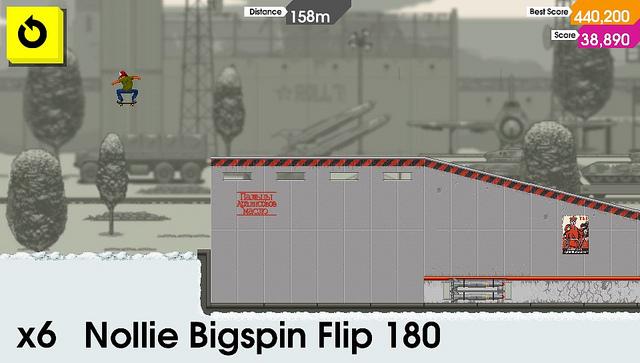 OlliOlli comes with 50 levels spanning five different environments, and includes about two hours' worth of content if you just blast through the standard levels (five to ten or so if you want to unlock all the pro versions). Each level also comes with a shorter but unique run in Spot Mode. The graphics are fairly simple, which means that the aesthetic difference between different grinds and flip tricks can be minimal, but it works well and the sound effects are satisfying. Only one of the songs included with OlliOlli really stands out, but I was always happy when I heard it coming on as it was the perfect music to skate to.

When I heard about OlliOlli I was really hoping for something that would scratch that skate itch of mine, and it definitely came close. Unforgiving gameplay that requires you to plan out your every move, and the interesting Daily Grind challenge makes it worth the entry fee, even if the 2D design puts constraints on what types of challenges OlliOlli can present you with. Regardless, this was an impressive introduction to Roll7 for me and I look forward to their next title.