It has been a rough start for Sony and Microsoft's newest platforms. While sales remain strong, exclusive software has come in at a trickle at best. Neither platform possesses an exclusive game of the quality most would consider a system seller. Sony's first attempt to rectify this since launch is inFamous: Second Son, but does it live up to the heavy burden placed on its shoulders? 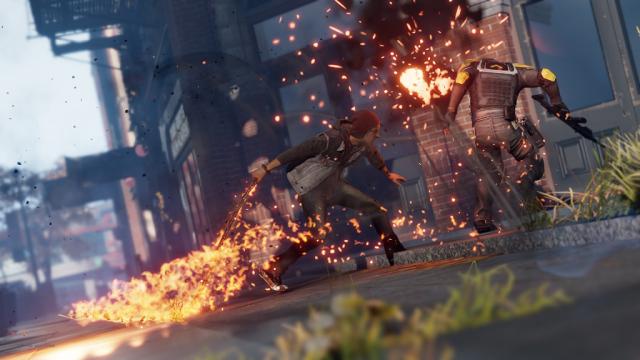 Second Son opens on Delsin Rowe, a street-wise punk and a member of the fictional Akomish Native American tribe. After a group of Conduits escape from a prison transport, Delsin discovers he has the power to absorb new abilities on contact with other Conduits. Soon he and his brother Reggie are thrown into an adventure to save their tribe and stop an oppressive Conduit hunting group called the D.U.P.

While the story is fairly standard for the franchise, the characters are a huge step up. Delsin and Reggie are multidimensional and far more likeable than Cole and Zeke ever were. Even the side characters have well-developed stories. All of the characters have two behavior varieties, one for your good choices and one for your evil choices. As in previous inFamous games, these choices are always completely black-and-white, with good choices encouraging you to protect and act non-lethally and evil choices encouraging you to kill whenever possible.

Delsin's powers will develop with these decisions as well, with good powers often restoring Delsin and subduing enemies, while evil powers kill and create maximum mayhem. The powers themselves offer far more variety than past games, with 4 complete power sets, each unique and swappable by absorbing a different power source. Delsin starts with Smoke and gains Neon pretty early on, but I won't spoil the last two for you. They all require very different play-styles. While smoke is heavily area of effect and stun focused, Neon is very precise and fast. 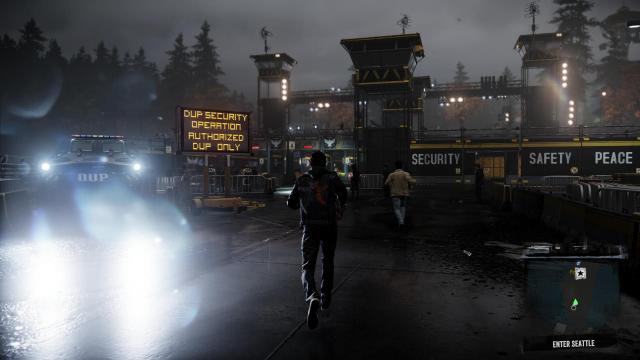 Fans of the older games will be somewhat familiar with the general method of play. Absorb energy, fire off skills, and absorb more energy. This may sound a little too familiar, but in practice Second Son is a very different beast. The biggest change is the complete removal of cover systems. Unlike Cole, Delsin isn't content to hide behind cover and fire off bolts. He must actively dive, dodge, and move around the battlefield. This coupled with Delsin's ability to switch powers while fighting by absorbing a different power supply makes Second Son much more dynamic and fast-paced than previous inFamous titles.

This pacing boost has been added to travel as well. While Cole's wire grinding was always fun, the pacing of travel was slowed by the time it would take him to gain height, climbing through awkward parkour moves. All of Delsin's powers allow him to quickly scale buildings, removing one of the primary frustrations of the previous entries in the series. Just as in combat, the abilities feel very different when roaming the city, which makes experimentation fun. 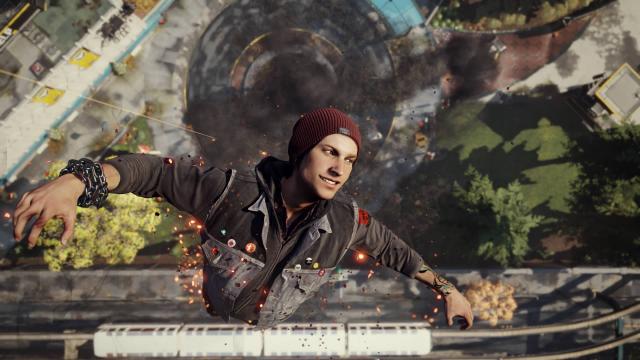 Unfortunately the city itself is one of the game's biggest downsides. Seattle is simply not as interesting as New Marais. The districts blend together quite a bit, and the map as a whole is considerably smaller than inFamous 2's. Citizens are as bland and samey as they were in past games as well, featuring maybe 10 different character models, each repeating the same few phrases as Delsin passes among them.

Good side content could have helped alleviate some of the city's shortcomings, but Second Son features little of interest outside of the main quest. Side missions become repetitive shockingly fast as you repeat them to “clear” each of the city's dozen or so districts. The only one which offers any interesting ideas is the tagging quest, in which you turn the DualShock 4 on its side to use it as a spray can to paint stencilled graffiti. Past that side missions are simple and dull, and in a post Grand Theft Auto V world, Sucker Punch's inability to create a living city with a variety of activities is starting to drag the franchise down pretty heavily.

The one exception to this is the day one expansion bonus mission called Paper Trail. The in-progress event features a wide variety of interesting activities both in-game and on an official website, linking your detective work together to uncover an interesting story. This inspired creation has so far been some of the most fun I've had with the game, even surpassing many of the main story missions. I can't wait to see how it unfolds. 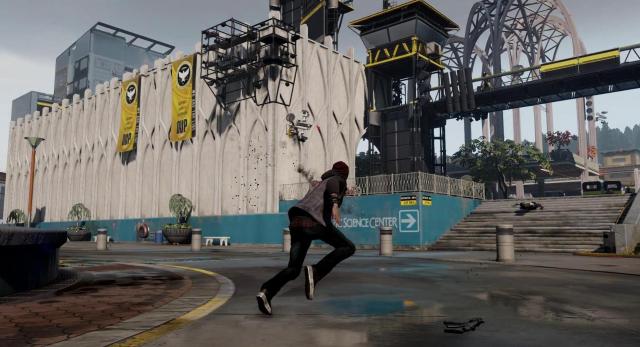 Both the characters and powers are sold by some impressive graphics. Facial animations are excellent and convey great emotion and non-verbal cues in ways the PlayStation 3 titles never did. All of the powers, particle effects, and the city itself are beautifully rendered, but Seattle is perhaps too realistic for its own good. It doesn't feel fantastical enough for the events and style of the franchise. Outstanding voice acting and a very good soundtrack also push the game's presentation to great heights. It's certainly one of the best looking console games currently available.

All told, inFamous's main story will last you about 8-10 hours. 100% completion can be done in about 14 hours, and it can be interesting to replay with a different moral choice. Sucker Punch claims Paper Trail will ultimately be about 5 hours of content, and so far that seems feasible. As a free update it goes a long way to improving a game which is otherwise damaged by poor side content.

There is no question to me that inFamous: Second Son is the best game in its franchise. The important changes to the combat system alone would make that true, and the better characters and great visuals go a long way. Unfortunately the game is held back by the same problems which have always held inFamous back. The side content is just not good at all, and the city is actually a step back from the more vibrant New Marais. If you have a PlayStation 4 and you enjoy superhero games, Second Son is a no brainer, but it's not the revolution the series really needed.

This review is based on a retail copy of inFamous: Second Son for the PS4