The Evil Within (PS4) - Review

Often dubbed “the Godfather of Survival Horror,” Shinji Mikami has earned his title in the genre. Not only did he create and direct the inaugural entry of the Resident Evil series, he then returned to the series by directing Resident Evil 4, simultaneously reinventing survival horror and creating one of the best games of all time (cue arguments that “Resident Evil 4 isn’t actually survival horror” here). Now, after nine years, Mikami has returned to the genre he has essentially redefined twice, with The Evil Within. 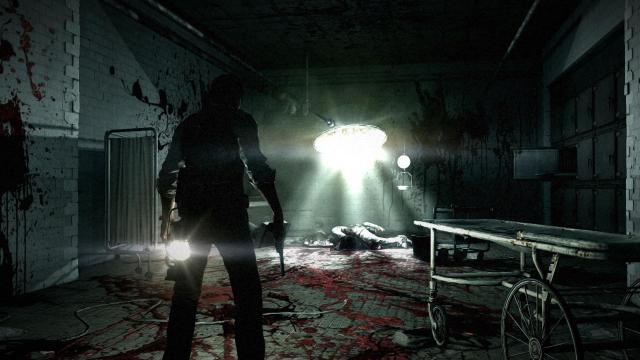 Mikami’s plots have never been highly regarded to begin with, but The Evil Within’s is the first that could be described as indecipherable. You play as Sebastian Castellanotos, a detective sent to investigate a set of horrible murders at a nearby hospital. Shortly after arriving, he and his team are attacked by a mysterious force, and upon awaking find themselves in a nightmare world where the laws of reality seem to not apply. Hallways run red with blood, the dead rise, disfigured monsters terrorize every corner, and the city’s landscape is distorted in an Inception-esque manner.

It seems like an interesting set up, but The Evil Within uses it to throw nearly every horror trope and cliche of the genre into a blender, often without any consideration of why those tropes exist in the first place, or any thought paid to whether some of them were any good to begin with. A dark forest! Abandoned hospitals! A spooky mansion! Meathooks! Graveyards! On their own each of these are nice callbacks to horror tropes, but despite this traditionally “scary” imagery, the game never manages to be all that terrifying. Early on, The Evil Within pulls the “everything might just be a dream” card, essentially removing the context that makes these assorted scenarios horrifying. Inception, as stated before, was clearly a huge influence in developing this game, but whereas Inception builds tension by firmly establishing rules of its dreamscapes and showcasing the consequences of breaking those rules, the world of The Evil Within seemingly has none. Anything goes in The Evil Within, it appears, and this lack of context only allows the game to elicit surface level jump scares. 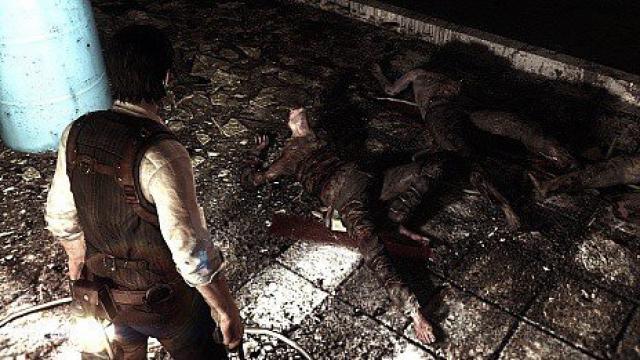 This lack of regard for horror tropes plays into The Evil Within’s gameplay as well. Unsurprisingly, The Evil Within’s closest gameplay relative is Resident Evil 4, with the camera following behind Sebastian’s shoulder and zooming in whenever he raises a weapon to fire. Unlike Resident Evil 4, though, ammo for each weapon is in limited supply, forcing the player to improvise and sometimes even flee when overwhelmed by the game’s foes. In its first few chapters, the game makes it seem like stealth will be a major focus, with Sebastian able to crouch behind cover, throw bottles to distract enemies, and perform stealth kills with a knife. Shortly after, however, the game pretty much abandons the stealth pretence entirely, with almost all of Sebastian’s problems being solved through combat.

The Evil Within provides you with a standard arsenal of pistol, shotgun, sniper rifle, and grenades, all of which can be upgraded by finding “green gel” hidden throughout levels, which allows for increased firepower, max ammo, and better reload times. While this selection of weapons seems limited, Sebastian is also equipped with an “Agony Crossbow”, which itself holds five different types of crossbow bolts: explosive, shock, freeze, flash, and harpoon. Bolts can be crafted by collecting parts strewn across levels, either by finding them in toolboxes or by disarming the game’s many traps. Sebastian also can also use matches to burn fallen enemies, allowing you to preserve precious ammo. Most of the game’s enemies can be defeated by traditional means, but figuring out how to use your bolts and matches creatively when outnumbered is one of the few places where The Evil Within’s combat shines. 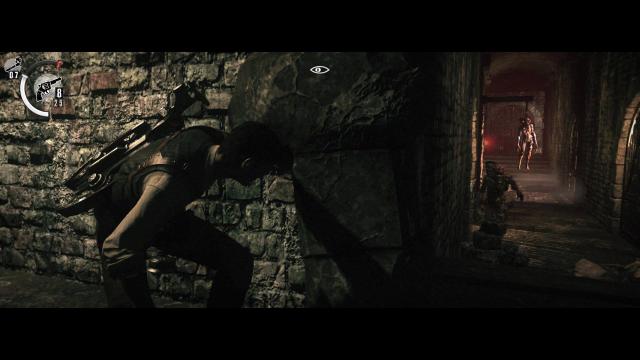 Technical hiccups unfortunately hinder the overall experience. The camera hovers so close to Sebastian that it interferes with the player's view of their surroundings, and the camera frequently gets trapped behind the environment, obstructing your view entirely. The game is presented in a wider aspect ratio than standard widescreen televisions, putting black bars on the top and bottom of the screen. While this attempts to create a “cinematic” presentation, it ultimately just further obstructs the player's view, exacerbating the existing camera issues. Horror can succeed by implementing tension through claustrophobia, sure, but here it only serves to frustrate.

Those looking to experience what the The Evil Within does offer will find good value. The game's campaign is spread across 15 chapters, each taking about an hour to complete, and beating the game unlocks a New Game Plus mode, allowing you to replay the game with all of your upgrades as well as new weapons. I was particularly fond of the Model Viewer that unlocks after beating the game, which not only allows players to look at character models and biographies but also gives insight into how the enemy design mirrors the themes and motifs of the game. Unfortunately, none of this is actually made apparent in the story, but it still made me appreciate the work and ideas that went into designing the game.

The Evil Within’s biggest sin is that it just isn’t particularly scary. It’s certainly gory, and at times thrilling, but by combining a smorgasbord of horror cliches and tropes, The Evil Within fails to earn its own identity, instead content to rest on the laurels of its inspirations. There’s a good game hidden within, well, The Evil Within, and at times the brilliance that Mikami has shown in past games does shine through, but these moments are few and far between. The Evil Within will appease survival horror fans looking for a nostalgia trip, but everyone else should approach with caution.