Sony Interactive Entertainment has announced the launch window lineup of games coming to PlayStation VR2. It includes more than 30 games that will release through March. 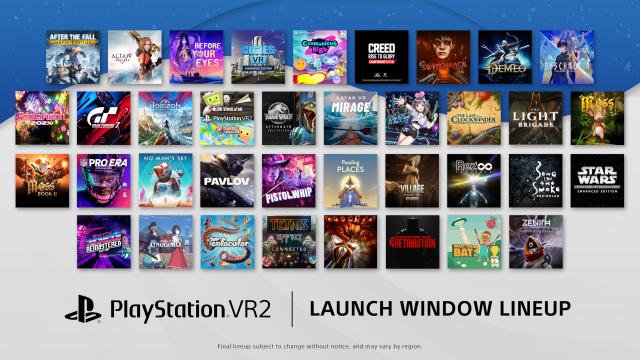 Here is the launch window lineup for PlayStation VR2:

And I believe this list will increase tenfold with the patchs for PSVR1 titles, I have good expectations for it.

Looking better and better. Just add Beat Saber and Astro Bot to that list and I'm a happy camper.

This is exciting, I always thought that before your eyes was a perfect fit for ps VR2 and eye tracking technology so it's nice we'll see it so soon

That's quite a large lineup.

But, where is Beat Saber?

Beat Saber will be coming later for whatever reason.

Yeah, I know. I'm just wondering why it's not in the launch window. It's the most popular VR game by like a million miles.

I think it's a small miracle it's coming at all. It doesn't happen often that a competitor supports the competition.

Huh? Beat Saber is on essentially every VR device.

Beat Saber came out in 2019, and was acquired by Meta in 2020.
I am not aware of it coming to any non Oculus/Meta platforms after acquisition.

Yep, Beat Saber was already in PSVR1 before the acquisition, I wasn't expecting a uplift for PSVR2, perhaps will only be small patch?

oculus and psvr are sharing quite a few games. including ironman vr and ghostbusters.

So perhaps there was a gentleman agreement to trade some titles?

Nevet heard of it