Living on a budget isn’t easy. I often struggle picking and choosing where to spend my money, but I have to admit that I have it much better off than Briar, the main protagonist of Soulstice. Whereas I have to quibble over being able to afford to eat out an extra day, Briar apparently has to choose between whether to wear pants on her right or left leg. Starring roles in games just don’t pay like they used to. 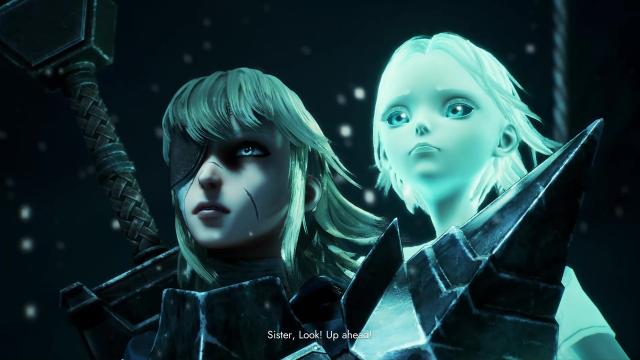 Dumb fashion jokes aside, Soulstice is a low-profile game that surprised me with how great it is. If you’re not familiar with Soulstice and didn’t read my preview back in June, then 1) I’m hurt, but 2) it’s a hack and slash style game that’s drawn comparisons to Platinum Games' high octane titles. You play as a “Chimera,” which is a fusion of two individuals who are sent out to kill demons. The aforementioned Briar is the “lead” character of the two and, for the most part, is the one you directly control. In combat, she handles more like a traditional hack and slash protagonist, with a variety of melee attacks (and a few ranged) that allow her to control space, launch enemies, navigate the battlefield, and, of course, dish out combos.

Briar’s moveset might be a bit more limited than some of the biggest names in the action genre, but that doesn’t mean there isn’t a good selection of stuff to play around with. With directional inputs, pause combos, launchers, gap closers, and (by the end of the game) seven different weapons that can all be swapped to on the fly, Briar can certainly hold her own. There are a lot of skills to unlock as well, including a grapple hook, different combo paths, and parry moves that let you tailor a specific playstyle to your liking. I do wish that some of the unlockable moves for weapons differentiated themselves a bit more; pretty much every weapon has some version of a launcher and dive attack, for instance, which results in some skills feeling redundant and certain weapons going under-utilized. 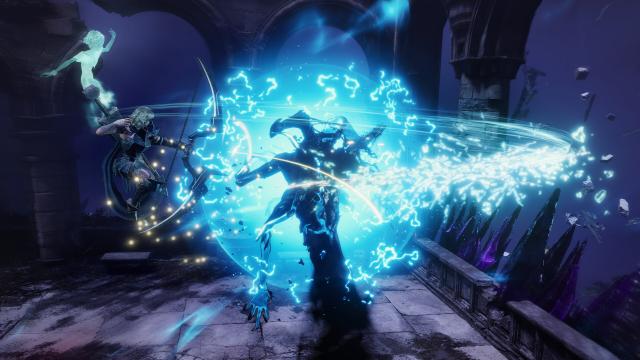 I’ve seen a good number of other reviewers liken Briar’s gameplay to Bayonetta, but personally I’d say Briar aligns more closely with Dante from a mainline Devil May Cry game than Platinum’s gun-wielding witch. Briar has less emphasis on a selection of pre-existing combos and instead focuses more on chaining individual attacks into custom combos. Personally, I would argue this is a good thing; I think it results in more combo creativity and ultimately a greater degree of control over who you’re playing as, but if you happen to prefer Bayonetta then know that you may find yourself playing something closer in line with DMC.

Genre comparisons aside, the other part of the playable duo is Briar’s sister, Lute. Lute isn’t controlled directly by the player in the same way, but remains vital nonetheless. She serves three main roles: automatically firing projectiles in the middle of battles, nullifying incoming enemy attacks by responding to button prompts, and summoning fields that allow Briar to damage certain enemies who would otherwise be invincible. 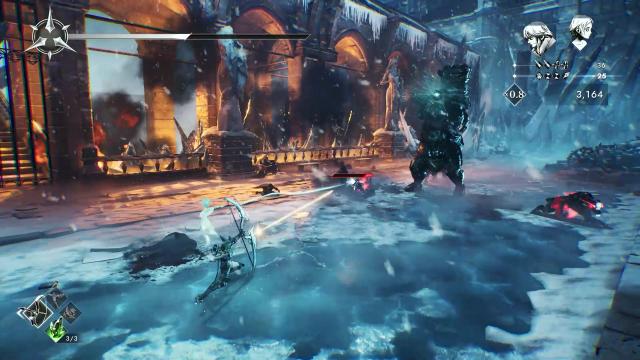 I’m a little more torn on Lute’s implementation than Briar’s. I like the idea of a dual character protagonist, and I do think she adds some interesting elements to the moment-to-moment combat. I definitely think the game would be worse without her. At the same time, I feel like something could have been done to make her stand out more. I’m not a huge fan of just having the same button prompt appear on screen to repel enemy attacks; it makes it feel very much like a quick time event. Perhaps a color-coded light system like the one in Metal Gear Rising could have been implemented; it would require the player to recognize and react more consistently than just seeing a giant “B” button appear and pressing it.

That said, the sisters together allow for one of the most unique and interesting concepts in Soulstice: the “Unity Gauge”. Ever since the original Devil May Cry’s “Style” Rank, hack and slash games have struggled to come up with a better in-combat system for encouraging attack variety and aggression on the player’s part. Plenty of them will “rank” the player at the end of a battle or mission, but there aren’t many that have even bothered to implement some kind of system in battle, and those that do pretty much just copy some iteration of DMC’s Style Ranking. That’s a shame, because more than just another way to grade the player, the Style Ranking serves as a way of encouraging the player to try out new moves and remain consistently on the offensive, rather than spamming a single move. It’s a natural way to promote exploration and get the player familiar with their entire kit. 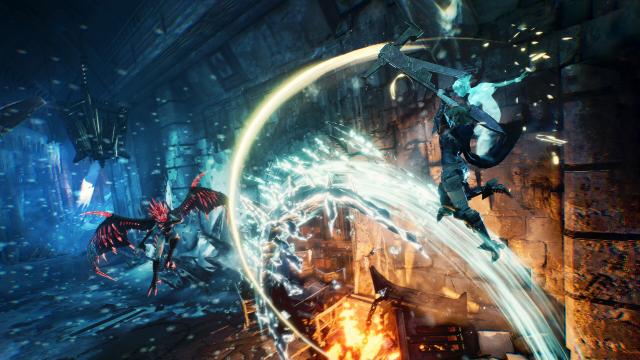 Soulstice has an alternative solution that’s so simple I’m amazed it hasn’t been done before (at least, as a core mechanic); instead of grading the player, it has certain abilities depend on how well you perform in combat. In essence, the way it works is that there’s a meter (the “Unity Gauge”) on the top right of the screen showing how in-step Briar and Lute are with each other during a fight. Mixing up your attacks and constantly landing hits will raise your gauge, while failing to land hits, using an attack too frequently, or getting hit will lower your gauge. When your gauge gets high enough, you unlock certain new powerful attacks.

For example, the second-to-highest Unity level unlocks a special finisher for pause combos that deals more damage and builds a solid chunk of Unity. And the highest Unity level unlocks a powered up state for a few seconds, where you can deal massive damage to surrounding enemies, as well as eliminate the need to activate Lute’s fields to otherwise render certain enemies vulnerable. Giving the player more abilities that are unlocked mid-combat when they play well is such a simple solution I’m surprised I haven’t seen it before, at least as a major mechanic in a hack and slash title. 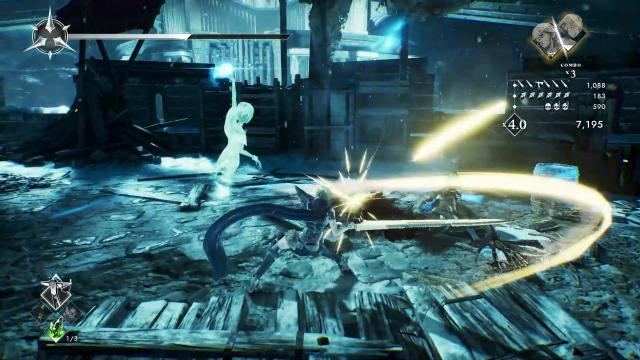 What’s perhaps most impressive is that many of the pitfalls that much, much bigger budget titles have consistently flubbed are avoided here. Manual lock-on is great and cuts down on mistaken inputs. Longer, slower story segments are entirely skippable on repeat playthroughs. And higher difficulties contain remixed enemy waves with tougher enemy types that make going through the game again a must.

All of that is to say that, for the most part, the combat in Soulstice is great. It’s fast paced, it’s fluid, allows for plenty of different approaches, and is just plain fun. I’ve always had a soft spot for games that just dedicate themselves to doing one thing really well, rather than stringing a number of shallow mechanics together and hoping it adds up to an A, and Soulstice is certainly in the former category. If you’re not a fan of pure “action” titles then this won’t change your mind, but if you are then I’d say you owe it to yourself to check Soulstice out. At half the price of a standard AAA release it’s certainly worth it. 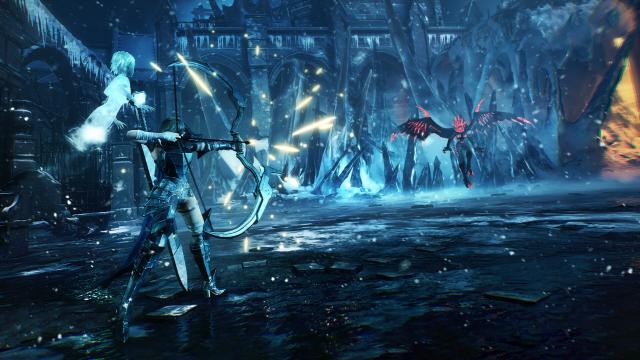 There are, though, a few rough spots which I would be remiss not to address. I’m not a big fan of the myriad “double tap” inputs that exist throughout Soulstice; it feels like it results in misinputs more consistently than any other command. Boss battles are also something of a mixed bag; there are a few fantastic ones that really allow the player to let loose and use their entire tool kit against a really challenging foe, and then there are some really bad ones. One particularly poor encounter a little after the halfway point involves a couple of enemies who take your ability to jump and dodge away, and force you to fight regular fodder baddies as a handicapped version of your usual self. For a game about combat variety and fast movement that's... about as antithetical as you can get to that ideal.

And as good as the combat is, Soulstice has a lot of downtime in between fights that isn’t especially engaging. In the late game, Soulstice gets very fond of level design that forces you to search through some rooms and hunt down crystals that you have to break to proceed, and while I’d hesitate to call it bad, it’s just kind of boring. This sort of thing would be fine as a gimmick for a level or two, but it shows up so frequently it makes me wonder if the developers thought it was really engaging design. 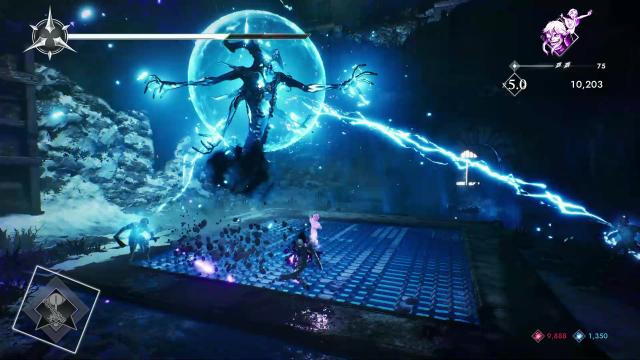 I’ve also seen complaints about Soulstice’s camera system, and while the fixed camera in the exploration segments can get a bit annoying, I never found it to be particularly problematic in combat. The camera remains fully controllable during 99% of the game’s combat encounters (and the few that aren’t are very simple fodder enemies), plus the lock-on usually does a good job of keeping things in view. I would need to experiment more to be certain, but I believe enemies also follow the rule of not starting an attack unless they're on screen, so at least personally I can’t attest to any of these issues.

Stepping away from the gameplay, Soulstice has some ups and downs. The art design for the first two thirds of the game is pretty bland and samey (seen one dark castle, seen them all), some of the voice acting by the minor characters is Path of Radiance-esque, and voice lines can repeat frequently when exploring areas. On the other hand, Briar and Lute have excellent voiceovers (performed by Stefanie Joosten of Metal Gear Solid V fame), and the relationship between the sisters is actually pretty compelling at points. Soulstice’s plot probably won’t be winning any awards, but it has a few nice twists and turns that kept me invested in the narrative. 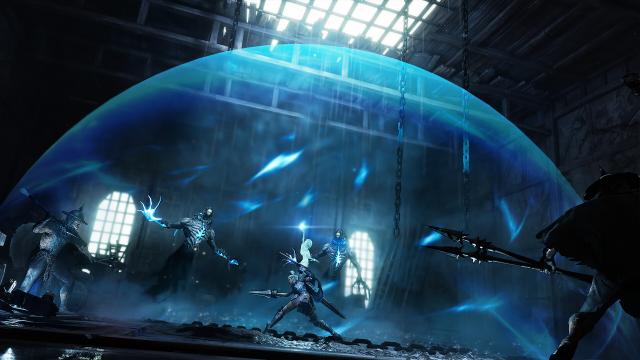 Ultimately, though, a combat game has to be judged by how good its combat is, and in that respect Soulstice passes with flying colors. There are a few rough spots here and there, but as a whole this is a genuinely great effort, and especially impressive considering this is Reply Games' first attempt at a game in this genre. Let's all agree to buy a copy so that Briar can afford a full set of pants for the sequel.

Hmm! Ya know, this might just be something I didn't know I was looking for. I'm liking the vibe I'm getting from the trailers. Would've likely flown under my radar without this review too, I might add, so thanks for bringing it to my attention!

I'm in the same camp: didn't pay much mind for it until this review. Now I'm out $50 for the Deluxe Edition!

I been loving it on PS5. Like Nier and DMC had a baby in Dark Fantasy