If you’re like me, you might be disappointed to learn that Citizen Sleeper is a video game and not, in fact, a space themed sequel to Orson Welles’ 1941 classic film. Nevertheless, it is still a good game, and even features some similar story themes. In a far distant future presumably presided over by the ghost of Jeff Bezos, wealth inequality has run rampant, and the poor now sell their consciousnesses to corporations in order to survive. These consciousness robots are known as “sleepers,” and you are one such sleeper who attempts to escape from their indentured servitude by fleeing to a space station known as the “Eye.”

Being the stubborn, contrarian person that I am, I usually try to avoid comparing a game to another title if seemingly every other reviewer in the world is doing it, but there’s really no other choice here. Citizen Sleeper is most similar to Disco Elysium, and there’s nothing I could find within the last 20 or so years that seemed like another even remotely useful comparison. Some people online compare the mechanics to games with very Japanese-sounding titles whose cast of characters are all schoolgirls with voices so high pitched they could likely shatter glass. I wouldn’t know how true this is, though, because I refuse to play anything that reeks so heavily of anime - the last time I did so my ears were ringing with the shrill cries of “ONI CHAN” for about a month afterwards. 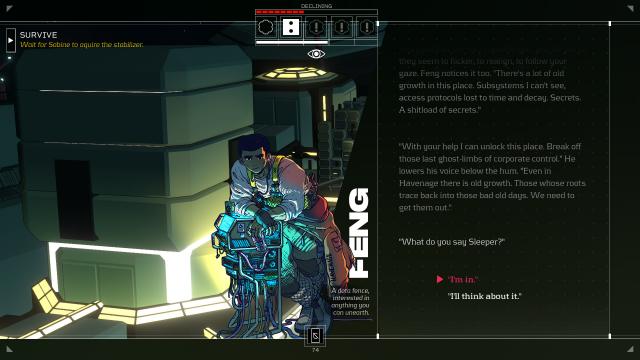 Anyway, all that aside, Citizen Sleeper is a visual novel with some RPG elements that affect the options at your disposal. After arriving on the Eye and running through some tutorials, you’re basically let loose. At the start of each day (or “cycle,” as the game calls it), you roll a certain amount of dice. You’re then free to move around the station performing tasks. Each task has various potential upsides and downsides, and the dice you choose for each task affects your probability of getting a positive, neutral, or negative outcome. For example, all else being equal, a two represents a 50% chance of a neutral outcome and a 50% chance of a negative outcome. A five, conversely, gives you a 50% chance of positive and 50% chance of neutral. Better outcomes mean better rewards and, perhaps more importantly, not harming yourself. After expending all your dice (or however many you choose to use), you can sleep and start the next cycle, with new dice in hand.

This is where the most unique elements of Citizen Sleeper come into full view, and it’s where it improves the most on Disco Elysium. In order to prevent sleepers like yourself from running away, the corporation involved came up with a planned obsolescence scheme that would make Apple’s iPhone division blush. Without regular injections of a specific chemical, your character has roughly the same lifespan as a child in an American public school, and since you're on the run, coming by that chemical is much more difficult. You can buy it on the station, but it’s very expensive, and between that and the need to also buy… food… for some reason… you’re immediately thrown into a high pressure situation where you have to make careful decisions and strategize how and where you spend your dice blocks. You need money to keep yourself alive, but a negative outcome could hasten your demise. Which outcomes are worth spending a high roll on to ensure a positive outcome, and which can be risked? 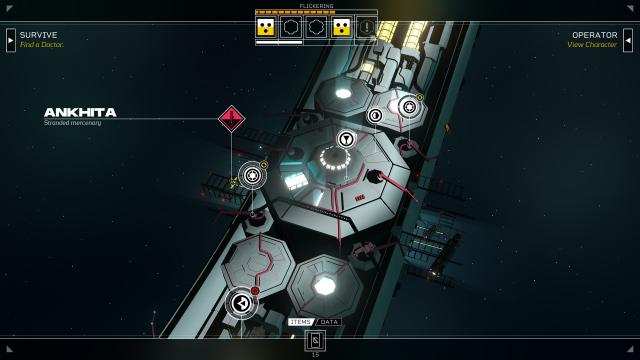 And things get more dire once your initial source of income realizes who you are and sends you away. It’s here that the real appeal of Citizen Sleeper comes into play, for me. For much of the game, you’re always just barely managing to scrape by. Nearly any source of income or resources is either risky or finite, and sometimes both. You have to constantly be on your toes, looking for new story paths to expand the income opportunities at your disposal, or else you’ll run out. But exploring those paths often doesn’t lend immediate income itself, resulting in players having to make strategic choices about how to invest their dice. How many resources do you put towards keeping yourself alive today, and how many towards trying to find long term opportunities for tomorrow?

Which might as well bring us to the narrative itself, or rather, the stories. There isn’t really one main story to Citizen Sleeper; rather, it’s a wide variety of optional stories, with each involving different characters and having its own resolution. Some stories will unlock new parts of the Eye for you to interact with (and, in turn, more stories themselves). Others will get you access to more resources. Others, still, will lead to one of the many endings available. 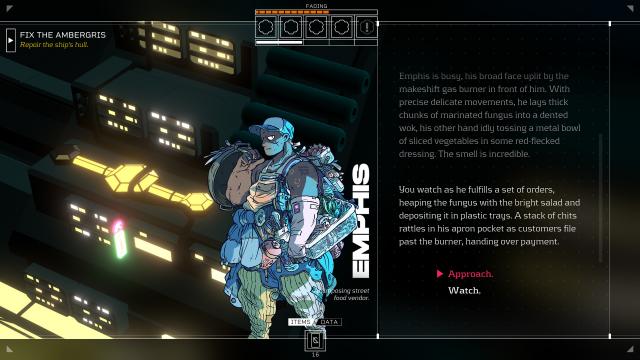 They’re all engrossingly told, and perhaps most importantly, are fairly succinctly written. One of my larger complaints about Disco Elysium was how wordy it could get at times; it didn’t seem like there was much in that game that was written in 10 words if it could be written in 50 instead. While reading is obviously an integral part of any visual novel, it’s important for games to respect the player’s time as well by conveying what they need to in a reasonably prompt fashion, and Citizen Sleeper’s writing does that well.

The various characters you’ll meet throughout are all fairly well developed too, with their own obvious goals and motivations that set them apart. You’re unlikely to complete all of their quests on a first playthrough (especially given the time sensitive nature of some of them), lending an element of replayability to things. Depending on how slow a reader you are, this game might stretch out to a three or four hour run on an initial playthrough, with maybe an extra hour or two of new content that you missed if you feel like a second playthrough. 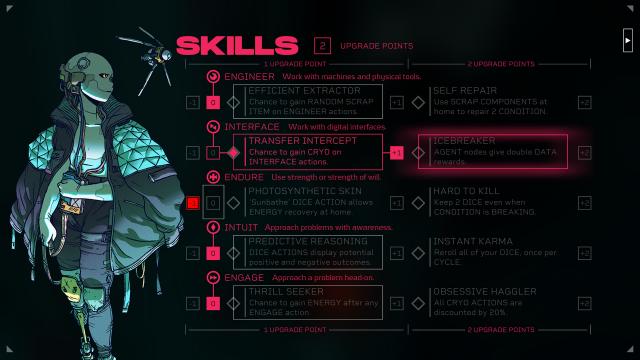 Given that it’s taken me this long to talk about the RPG mechanics, you might have guessed that they don’t play too much of a role. Essentially, you can use them to unlock certain optional elements that are almost like quality of life improvements (decreasing the cost of purchasable goods, showing you the potential positive and negative outcomes of a choice, and so on) or increasing the likelihood of positive outcomes in certain events. Considering how rare opportunities are for gaining money at first, there’s not much reason for specialization, honestly, and by the end a “jack of all trades, master of none” build served me better than I suspect trying to specialize would have.

The endgame is the biggest weakness of Citizen Sleeper by far, as you’ve usually hit the point where you’ve acquired enough money and unlocked enough skills that running out of resources isn't a realistic concern. At that point, the strategy element of things mostly goes out the window, and it just becomes a somewhat tedious waiting game for the story to progress, mostly shuffling through cycles and doing the same few activities over and over to keep yourself alive. It's a weird inverse difficulty curve, where mistakes are far less punishing at the end of the game than the beginning. 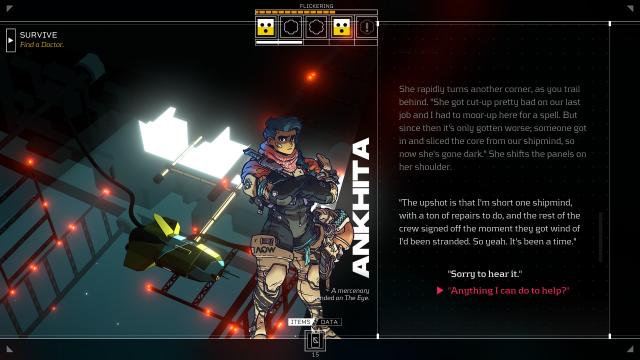 While the writing is quite good as a whole, one element that’s a bit disappointing is how little impact your dialogue choices have on the actual outcome of events. A good story doesn’t need significant dialogue options, but it’s a little saddening to know that all the time I spent pondering over what the right response for a given situation was would have been spent equally well gluing Reese’s puffs to myself and attempting to scare the neighbors. One of the more absurd examples of this happens in a quest where you’re being hunted by a member of the corporation that wants your body back. Despite me attempting to choose the peaceful dialogue option every time, I eventually just got forced into a non-choice where I somehow managed to outshoot a professional assassin despite him having the drop on me and the gun I was using being on the ground. 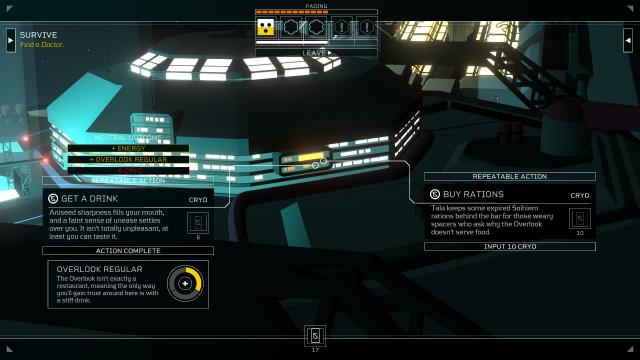 On the flipside, the more aesthetic elements of the game are incredible. The soundtrack is absolutely sublime, with a number of soft, techno-themed tracks that really capture the emptiness of space and the feeling of loneliness. I would not be surprised at all if this wound up being my favorite soundtrack of the year. The minimal artwork that is here isn’t far behind either; characters each have unique portraits that look fantastic. If there’s any art related complaint I have, it’s that there isn't enough of it. I would’ve loved to have seen this game with a slightly larger budget and more depictions of the Eye itself.

Those complaints aside, Citizen Sleeper is a very compelling experience, with an enticing story supported by some solid strategy gameplay and barebones but still competent RPG mechanics. If you’re open to a Disco Elysium-esque visual novel that’s a bit lighter in tone (despite the dystopian setting) and emphasizes resource management more, it’s safe to say you’ll enjoy this.