You know those games that are functional but tragically boring?  There's something about this special caste of titles that's often tough to describe; it's almost like they have some magical ability to leach away your enthusiasm.  That initial dream of a new game's potential eventually turns into... a nightmare.  Segue!  Magic Fish Studio's latest is the next entry in this infamous crowd.

In Nightmare follows the journey of a young boy named Billy.  Having dealt with trauma for so long, he closes himself off from reality and awakes in a fantastical world of his own doing.  The hellish world he's unintentionally created now wants to keep him there.  With the help of his trusty butterfly companion, Bikti, he strives to overcome every obstacle – physical and emotional – and wake up once again. 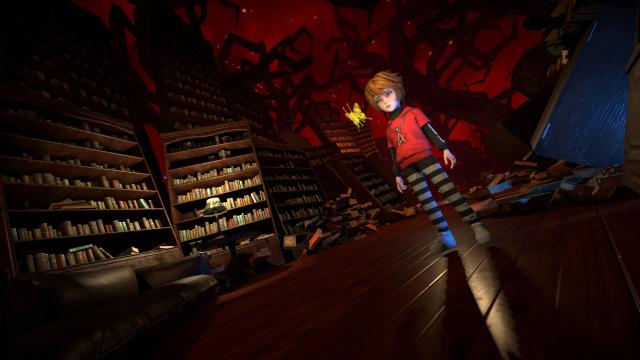 In Nightmare's story structure is basically "T-rated Silent Hill."  How Billy enters the world is different, but the monstrous manifestations that haunt him there are directly inspired by his traumatic reality.  Regardless of franchise, that's always been a tantalizing horror template: someone's messed-up psyche taking on a physical form to continue piling on trauma.  But there has to be one clear understanding when taking this route: what's actually haunting the protagonist?

With no voice acting, In Nightmare relies on a surfeit of collectibles and occasional flashbacks where white silhouettes mime their frustration with Billy over anything.  There's a lot going on in the background (bad parents, bad step-parents, bullies, etc.), but it eventually winds up being a parody of itself: sad boy gets sadder as everyone scares him while sad piano music plays in the background.  I'm not trying to diminish those events in a vacuum; in fact, those elements can work.  But its impact becomes thoroughly weakened after its insane repetition and elementary storytelling errors.

As much as I like collectibles, you shouldn't extensively rely on them.  Short snippets of potential diagnoses or prescription medication is one thing, but relying on diary entries to track who's who means something failed along the way.  It all quickly becomes this storytelling stew where Billy's various guardians initially hate him and then... yada yada yada forgiveness becomes the key to beating this trauma.  Woohoo!  As a consolation prize for wading through this bland entrée you also get a lackluster finale.  Congratulations. 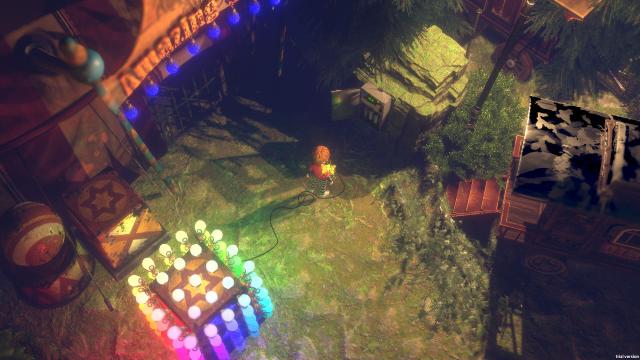 Similar to the narrative, In Nightmare's gameplay harkens back to other titles that've done it better.  The setup is straightforward: a genre mash-up between hide-and-seek stealth, occasional action set pieces, puzzles, and platforming.  Where it breaks away from the routine is its isometric viewpoint and half-baked "solo co-op" mechanic.  For the latter, this is handled by controlling Billy with the left stick and Bikti with the right (whenever you wish to do that).

This basis seems relatively simple to follow, but it's damaged by several cardinal sins.  The most flagrant to me is the isometric camera.  Beyond feeling too zoomed-in and condensed, Magic Fish has a liking for various vertical objects (tree branches, building walls, etc.) that occasionally block out the view.  Of course, Billy has a transparent outline during those situations; however, there are some pathways & objects that aren't as easy to discover due to their awkward positioning.  The more adventuring you do the more you discover half of your screen is blacked out.  The fair question to ask would be "why not make those objects semi-transparent, like in any other competent game?"  To which I can only say "I have no idea."

It's a shame too because it also disrupts the Billy/Bikti quasi-co-op dynamic too.  Through my entire seven-hour runtime, I kept reflexively using the right control stick whenever a camera position was annoying me.  All I was really doing was taking control of Bikti and moving her a couple of feet before getting annoyed with the camera again.  Beyond that annoyance, Bikti's main purpose is supplementary puzzle guide and scout.  Her focus ability (turning her blue) is essentially an in-game black light to uncover hidden items and her magic enables her a wider radius away from Billy to scope out the area.  The camera being so close is to inflate her scouting utility. 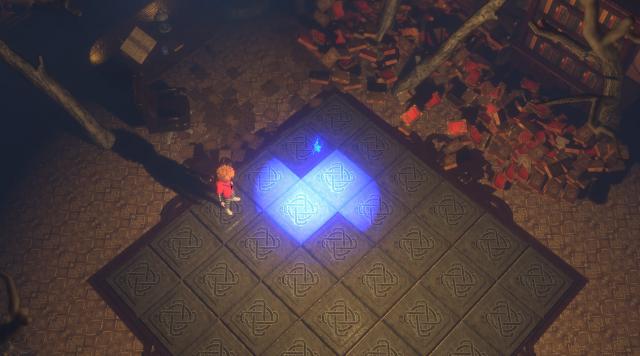 I could understand these restrictive elements – to an extent – in a better game.  After all, having this disconnected god-like view of yourself within a nightmare carries its own horrifying implications.  But even when disregarding those nuances what's left is of a rather perfunctory design.  Stealth doesn't equip players with the proper tools for managing detection; for instance, most of the eyeball monsters have a vision cone but there's no tangible sound meter.  The rules are even hazier when being stalked by one of the female bosses.  The threshold between suspicion/detection and successfully hiding in a wardrobe feels inconsistent.

Taking a break from the plethora of problems, puzzle design is one of its few... “better” qualities.  Most run the gamut of basic match puzzles, discovering hidden platforms with your Bikti Black light, and so on.  Nestled within the more easygoing ones are tougher conundrums like a Rubik’s Cube room or a specific boss fight.  Even when ceding some credit, it's annoying how obtuse other big puzzles can be with regards to signposting.  It's tough to attach much appreciation when the quality can vacillate between obnoxious, bland, and good in quick succession.

On the other hand, the most consistent concept is In Nightmare's hub world.  Billy's respite from each extended level brings him back to this incomplete carnival-themed locale floating through the ether.  When I say "incomplete" it's more like various objects, including most stepping stones, are purely made of glass.  Acquiring the necessary collectibles for x or y item will make their true form materialize.  As both a whimsical break from the usual and a means of cataloging your accomplishments, it earns respect.

It says something when your game's best design example is detached from the main course.  Beyond the wider fundamental concerns stated, even the little things contribute to In Nightmare's uniquely insipid template: the consistent need to button-mash the jump button for clearing various obstacles, annoying collision detection that'll halt you while being chased, and so on and so on.  Shoddy execution at a macro and micro level. 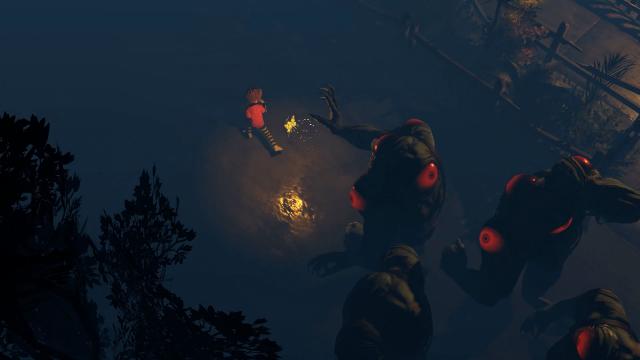 Considering the blank canvas horror games can typically exploit, it's a shame to see Magic Fish rely on repetitive and uninteresting designs.  Granted, the environments beyond the great hub worlds are varied and serviceable, but the monsters of the week don't cut it.  One of the most common enemies is a muscular colossus with a big red eye on his chest, back, and both shoulders.  It looks about as dumb as it sounds; moreover, the strange hyper-fixation on copious eyeballs quickly loses steam after it's littered across other creatures and locations.  The desperate, artificial need to gross-up the world diminishes its impact; that goes double for the egregious smoky visual effect whenever you're hiding.

That reduced effectiveness carries over to sound design as well.  There are some inspired touches, especially the idle/detected states when hiding from a stalking witch, but their overuse eventually defangs the whole experience.  Although the atmosphere can sporadically feel effective, you'll quickly be familiar with the routine and the generic soundtrack.

In short, it's basically another horror title done in Unity Engine.  I know that tends to be a punching bag, but it's tough to ignore how much of it feels like prefabricated parts prepped for assembly. 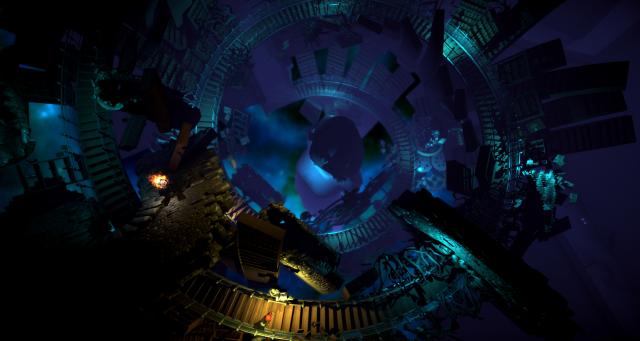 Given the modest asking price of $19.99, I can totally understand being kinder with the amount of content on offer.  There are a panoply of different collectibles and passive stat boosts to uncover.  The issue is I have zero enthusiasm to search for them.  Instead of dragging out the pacing in most chapters, Magic Fish could've removed one-third (or more) of In Nightmare's worst spots and they wouldn't be missed; instead, most chapters feel like a languishing marathon.

To put In Nightmare into perspective: imagine leeches sucking enthusiasm out of your body the longer you play.  Yes, it's functional and has some decent concepts, however the experience simply can't avoid comparisons with boring indie horror titles.  Even its small gameplay nuances wind up detracting from engagement in multifaceted ways.  It's through all of these considerations – big and small – that Magic Fish Studio's first title comfortably ranks among the worst I'll play all year.

This review is based on a digital copy of In Nightmare for the PS5, provided by the publisher. 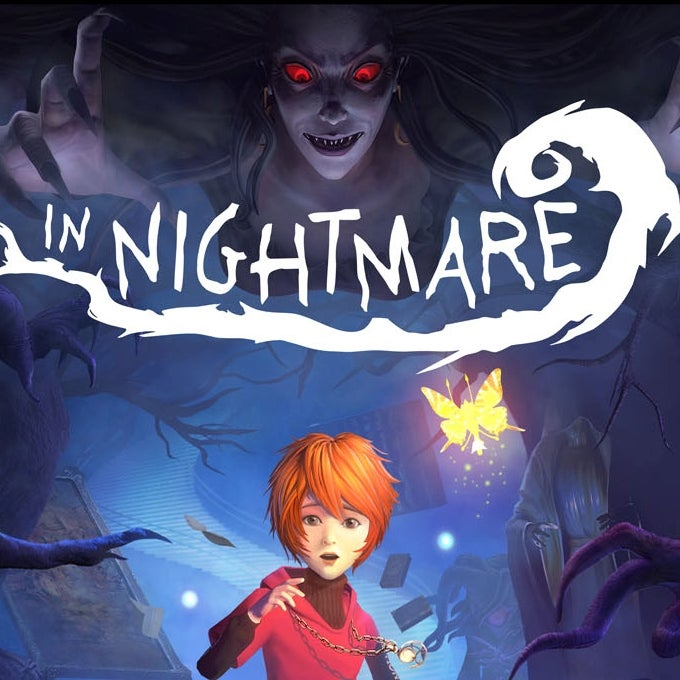