You've likely seen me recite this before: a couple of seasoned industry veterans decide to go out on their own and make an indie studio.  This time the studio's name goes by Kaizan Game Works.  Naturally, this newfound freedom enabled the freshmen team to go for broke by combining open-ended investigative exploration, vaporwave, and supernatural thriller into one.  What hallucinatory drugs inspired Paradise Killer will likely remain a mystery, but the reason why this odd mixture works so well doesn’t stay hidden for long.

In a strange area of the cosmos lies Paradise Island, home of near-immortal beings striving to reawaken their ancient gods.  This process has been ongoing for several millennia.  Throughout those years, the leaders of this island, called "The Syndicate," have been consistently iterating and updating the island to please said deities.  On the cusp of moving to the next iteration, a startling series of murders against The Syndicate and some royal guards has just occurred.  Now, the disgraced and formerly-exiled investigator Lady Love Dies is foisted into solving this case.  One alleged perpetrator was found at the scene with a bloody weapon, but there's a potentially greater conspiracy at play. 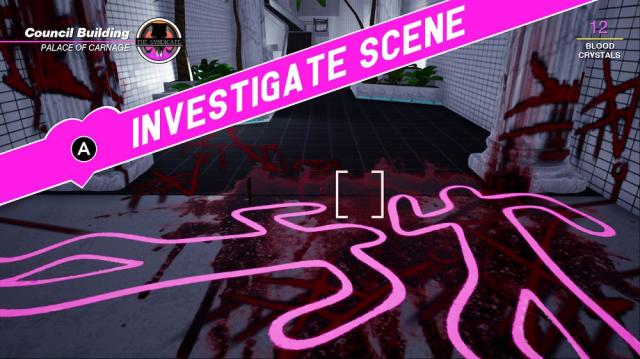 Despite how much I'm paring it down, this could be too much to take in for the uninitiated.  Hell, the first cut scene is just two silhouettes at a bar on Paradise Island Version 25, before it cuts back to your situation in Version 24.  When finally in the shoes of Lady and having retrieved your handheld super-computer (named "Starlight"), you slowly begin to understand the world and Lady's past relationships.  Emphasis on the word 'slowly' too.  Considering how unrestrained you are after the introduction, the piecemeal approach to early world-building can feel a bit disorienting.

Fortunately, this zany & sophisticated world is worth the inflated toll.  If I were to tie in both the visual and narrative tone, I'd describe Killer like this: imagine if Lisa Frank grew up then simultaneously dove into vaporwave and Paganism.  You won't immediately get those contrasts, and may even have a few questions, such as "where are her parents in all of this?"  But once you internalize the unique social hierarchy, the collective drive of ascendance among these millennia-old aliens, how demons continually pervert each version of the island, and so on, you'll eventually be ensorcelled in its inherent strangeness.

The way its metaphysical rules are incorporated into the murder investigation also works in its favor.  Given how all of the murdered Syndicate members are sealed behind several layers of magical security, you need to understand this world's rules.  Mixed in the world-building are also the political, religious, and/or personal motivations of each potential suspect or co-conspirator.  For all of its flamboyance, the variety of personalities and roles mesh well with standard crime thrillers. 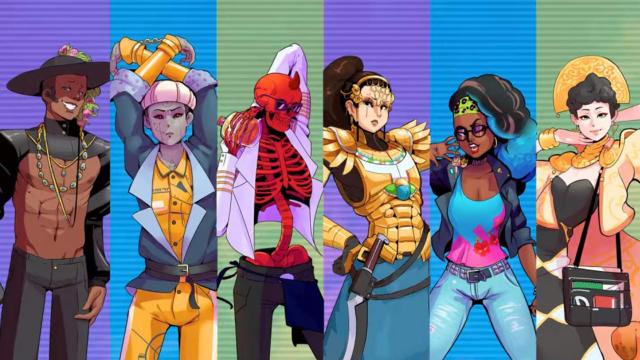 Outside of the early pacing of information, character writing is another sore spot – to a diminished degree.  It's one thing to fixate on weird as an aesthetic, but another when tipping towards ostentatiousness.  In the words of Winston Wolf (Pulp Fiction): "just because you are a character doesn't mean you have character."  That's the best way I can summarize the inconsistent dialogue.  Many individuals have great moments that tie into Lady's detective work while others stay relatively static and barely add any greater intrigue.

I know I'm cutting a few corners in describing why Killer's story succeeds, but that's inspired by how often I was surprised by it.  The conspiracy within Lady's primary and secondary cases continually builds at a manageable pace; plus, how these cases intersect with a greater understanding of the world is carefully considered.  What initially seemed showy for its own sake blossoms into this special setting filled with a nuanced mythology, well-rounded characters, and an engaging atmosphere. 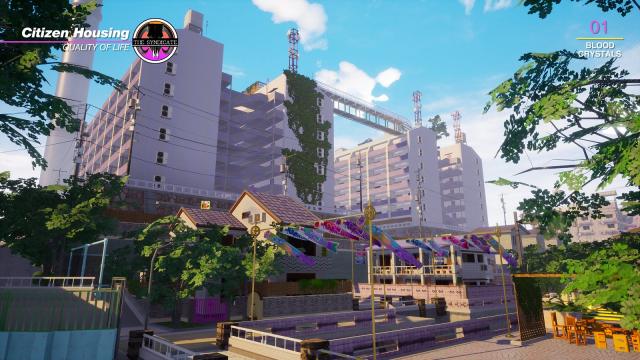 Although I was faintly aware of Killer after its PC release (2020), one thing I vaguely recall is its praise as a "detective game."  I don't think that accurately describes the ins-and-outs of its design; even the store description page does a better job of delineating this.  It's less of a detective game like Return of the Obra Dinn and more about the player navigating through the role of a seasoned gumshoe.  You do the legwork by making dialogue choices, exploring the world, and modest puzzle-platforming to collect any evidence.  Then, Lady & Starlight automatically handle filtering and categorizing said evidence.

Similar to the praise showered onto Breath of the Wild and Elden Ring, Killer incorporates a heuristic approach to its open world design.  After being shuttled to the judge and getting the first case file, Paradise Island is essentially your oyster: go off the beaten path to collect blood crystals (in-game currency), head straight to the crime scene, or walk right back into the judge's quarters to settle the case.  Feeling unencumbered like that enhances the drive to scour for new abilities, such as double-jumping, and Starlight upgrades that'll open more opportunities to complete image-matching puzzles (what qualifies as "hacking" here).

What's great with starting the trial anytime is how each approach compliments the player's interpretation of Lady Love Dies.  Sure, she's pegged as an obsequious investigator from her previous record; then again, she was divested of her position then enisled for over three million days before tasting freedom again.  Who's to say she wouldn't be bitter over her punishment and gun for a quick conviction?  There's a good dose of self-doubt butting up against her role while complimenting the gameplay. 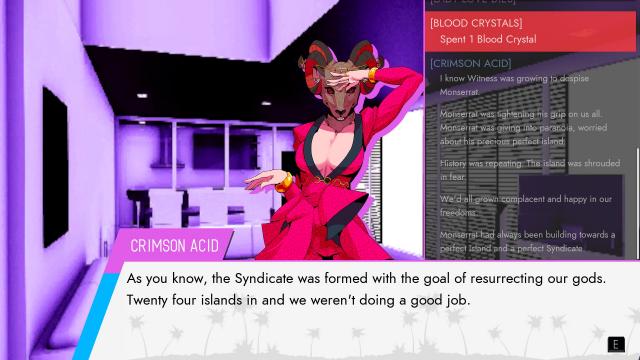 Getting back to the mechanics, it's admittedly not a complex first-person platformer/walking sim, but still exciting in different ways.  The pitfalls, like virtually no post-jump control of momentum (until getting a missable power-up) and unfair expectations in precision can be annoying.  It counteracts those with a world that's worth investigating.  I lost count of the moments when its subtle encouragement to sightsee ferried me to new leads.  There's a big gamble in leaving the player to their own devices, but the subtle visual cues and the thorough level design consistently entice you to see everything the island can offer.

Interrogations hit a typical rhythm: each potential suspect will act squirrely with the truth, or outright mendacious, until they recollect another tidbit once you present new evidence.  Whether they're outwardly friendly or hostile, everyone has a motive to bury some information or only give it out at a price; on top of that, there's an option to chill out with each person for the potential award of nabbing a potential alibi breaker against someone else.

It's not perfect, by any means.  There's an annoying amount of impertinent filler questions where the usual response is "go ask x person about it instead" when you'd figure Lady (as the detective) would already filter out those dialogue options.  The way several choices reset fools you into thinking a new piece of evidence will re-jog a suspect's mind, but it usually recycles the same “I don’t know” answer ad infinitum.

Considering the time spent conversing with others, you could instinctively wonder why not opt for a pure visual novel.  Hell, every character in the world is just a flattened cardboard cutout of what you see during dialogue.  But that misses the exploratory fun baked into scouring the whole island.  It's mechanically similar to a walking sim with double-jump and no fall damage, but all of the nice slices of discovery – both related to the criminal cases & great Easter eggs – make it consistently engaging.  Even when running back and forth, there's enough carrot on the stick to reach the final trial. 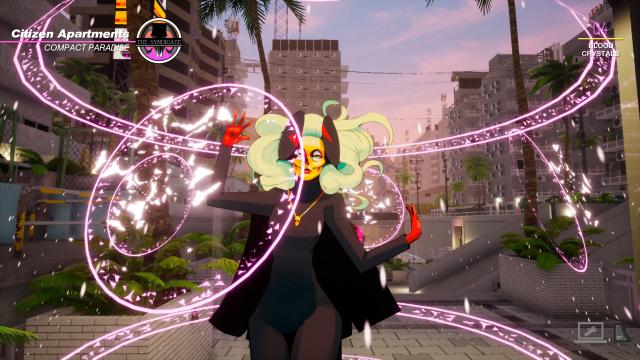 Harkening back to that earlier Lisa Frank comparison, Killer's art style arrives at a few different intersections.  After just a modest jog, you could be surrounded by kitschy statues of various gods on the beach and then in an opulent sacrificial chamber.  The best part is none of it will phase you.  That also extends to the collection of odd characters you meet.  Kaizen succeeds in making immediately distinct people just from their silhouette alone – which is especially helpful when mentally cataloging who's who.  Beyond the overworld or color palette, it’s the finer details like the retro look from 80s/90s postcard photographs, CRT effects during video calls, and more that add so much flavor.  Some gaudy backdrops can get louder than the soundtrack, but it's otherwise an impressively cohesive art design.

Speaking of soundtrack, Barry "Epoch" Topping's total composition (both the original OST and newly-added Killer B-Sides) is among my favorites of this year.  Whether exciting or mellow, there's incredible variety found in its inspirations: vaporwave (obviously), funk, synthpop, jazz, and other sub-genres.  I could spend more words waffling on about it, but I think showing will cement my case.  Sound design and voice acting don't steal much attention, but they're serviceable in their own right.  The choice to limit voice acting to canned phrases, audio queues, or the first written sentence worked fine in this context. 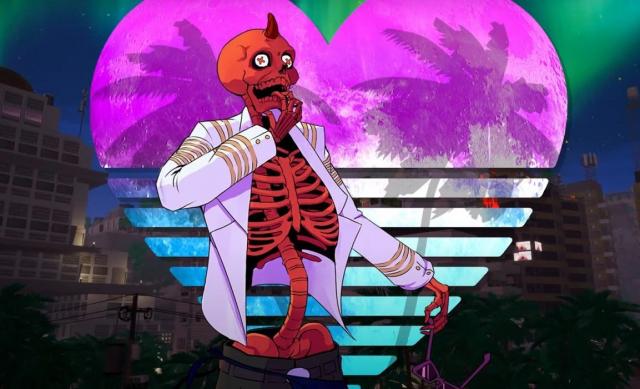 If crunching the numbers on a dollar-per-hour value, Killer is more than sufficient: a $30 price tag for what took me 11-12 hours to finish.  I'll admit I didn't go the full completionist route (yet), so that will add on extra time too.  As well-rounded and fulfilling as the journey felt, I would've condensed the island's square footage by five or ten percent.  That's not to diminish the surprising expanse and verticality on offer... but there did come a point when going back and forth plateaued excitement – even with fast travel.  It's akin to a solid two-hour film that could've been cleaner with ten minutes trimmed off.

In the end, Kaizen Game Works' first title is a pleasant surprise and a great addition to this genre.  The way its dark undertones are wallpapered over by its wildly eccentric visuals, soundscapes, and characters works so well.  Admittedly, certain gameplay and storytelling elements can feel like empty pageantry, but they're annoying speedbumps in the grand scheme of things.  Paradise Killer succeeds by selling all of its ostensibly contradictory artistic choices as inseparable parts of a greater whole.

This review is based on a digital copy of Paradise Killer for the XS, provided by the publisher.