Since his GameBoy debut, Nintendo’s adorable pink mascot has been the star of many colorful platforming titles. The IP has served as an even more whimsical counterpart to the Mario series, revolving around the satisfying ability to absorb enemy powers. But while Kirby has explored new concepts (i.e. Epic Yarn), the series has largely adhered to a formula and scarcely ventured beyond the 2D realm. I’m happy to say this isn’t the case with Switch’s latest rendition as a whole.

Kirby and the Forgotten Lands shines with its rewarding gameplay and rich 3D worlds—along with fun additions that breathe some life into the franchise. It draws from series staples, while adding intrigue with its post-apocalyptic themes and cool new abilities, including the now-famous car-Kirby. While erring on the simple side, this overt accessibility is balanced with subtle depth, and a slew of neat extras for those who seek them. 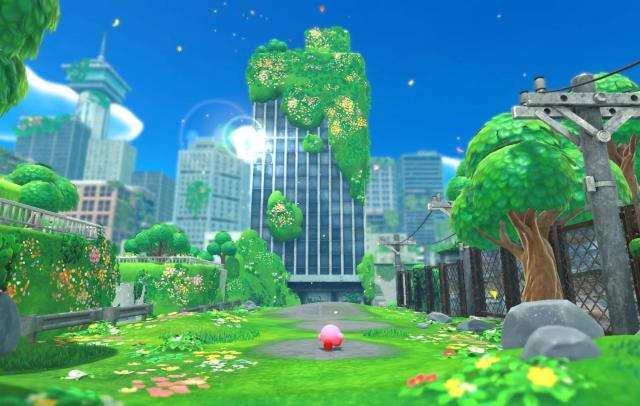 Though dripping with typical cute, colorful Kirby themes, The Forgotten Lands adds a tinge of bleakness this time around. Along with the usual vibrant, sunny locales, players will find themselves navigating abandoned mall ruins and industrial wastelands. This motif stems from the stark new setting fittingly called New World. As a whole, this environment proves a fresh departure from usual Kirby locales; even if its rusted, ruined set pieces are overdone at times.

The pink puffball ironically finds himself sucked up into a vortex, dropping him into a strange foreign land, where he must fend off the hostile Beast Pack. While traversing a range of biomes, Kirby will absorb abilities and gather kidnapped Waddle Dees as he fights to seal a space-time rift opened by an interdimensional being… You know, the usual deal. 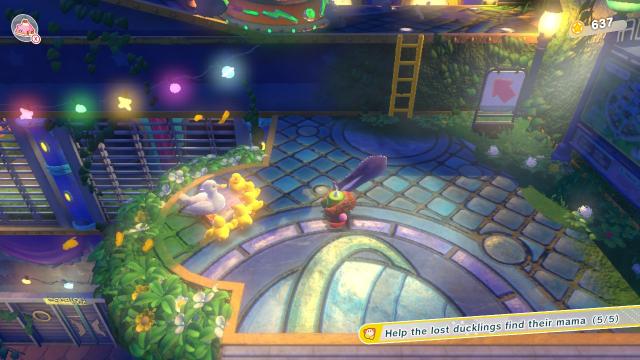 The game plays simpler and more straightforward than its 3D layout and post-apocalyptic aura might convey. Instead of stressing deeper, open world elements, The Forgotten Land takes more of a Super Mario 3D World approach with a quasi-linear design in a 3D space. It clearly aims for accessibility - in terms of simplicity and its palatable mechanics. Dying was rare for me, even when doing deeper stage dives and wielding some of Kirby’s less potent powers. This more laid-back style nicely fits the Switch’s pick-up-and-play sensibilities, though it may not do much to grip some more seasoned gamers.

That’s not to say the gameplay or level design is shallow - far from it. The Forgotten Land encourages you to play around and soak in each stage in full. This is partly achieved through the lavish presentation, which displays vibrant, near Pixar-level visuals. And these eye-pleasing aesthetics are enhanced by a jaunty, multi-layered soundtrack throughout. There’s a reason Kirby is the first (and thus far only) Nintendo IP to receive a Grammy award, after all. The jazzy orchestra 8-Bit Band emphatically makes its case with some melodic backdrops, which sets the mood and complements the atmosphere. 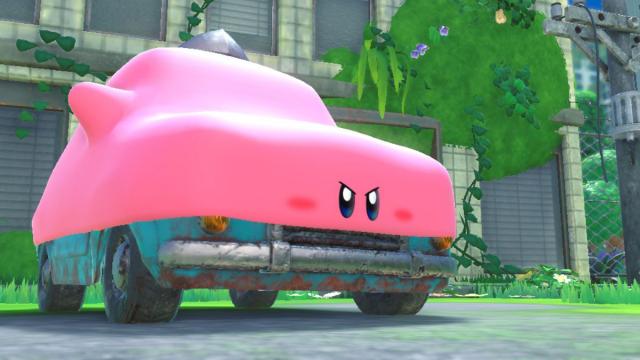 Of course, there’s plenty to absorb when it comes to the gameplay itself, too. Each stage features a slew of baddies, hazards, and puzzles for Kirby to play through, as well as useful collectibles. In typical Kirby fashion, The Forgotten Land thrives not on gruelling gameplay, but some pleasing, free-flowing mechanics and the fun ability to copy enemy powers. It feels impressively organic and versatile in this respect, as most areas accommodate multiple powers, methods, and actions. In fact, you can often run and float about without any ability, as Kirby can spit out inhaled foes and blocks as a potent weapon in its own right.

But for the most part, players will want to utilize certain abilities at opportune times. The game will encourage you to use ice to skate across lava, roll around and skew foes with a needle Katamari-style, or wield a gun to blast distant targets. You also might need a unique power to get through puzzles, nab collectibles, or clear blockades. For instance, Kirby may need to utilize a drill to unearth buried treasures and dig under walls. These cleverly-designed layers of depth allow players to get the most out of the experience regardless of age or skill level. 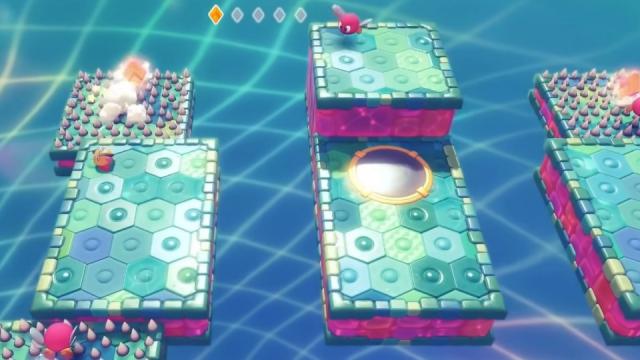 Kirby’s copy mechanic is really taken to the nth degree here. The Forgotten Land offers a dozen upgradeable moves with distinct stats and mechanics, as well as the standout new “Mouthful Mode.” The puffball proves cartoonishly malleable this time around, as he can absorb larger objects that include traffic cones, cars, and even soda-shooting vending machines. Along with invoking some yuks, these put an entertaining new spin on the tried-and-true formula. Kirby will expand to the size of the object as he (partly) consumes it, allowing him to plow through foes and tackle certain objectives at designated times.

Players may choose to use a cone as a pile-driving stab, or occupy a car to zip across raceways and turn enemies into roadkill. This amusing feature also serves as a tool to complete certain puzzles. Kirby might need to gobble a large ring, which allows him to blast air to move a boat or power a fan, or consume a staircase and move it to reach an elevated platform. While verging on gimmicky, Mouthful Mode entertains with its zany, unpredictable nature and offensive prowess. Some bouts can feel more like unrealized minigames than powerups, but fun minigames nonetheless. 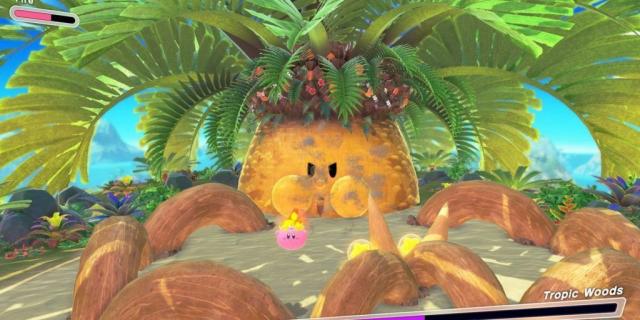 My other major source of enjoyment are the brief, but intense timed challenges scattered across the world map. These levels, known as Treasure Roads, pit Kirby in bite-sized missions against varying foes and hazards. Each stage centers around a specific power or Mouthful Mode ability (and they can’t be unlocked until said power is obtained). Missions range from arena sword fights to rolling down sloping pathways as a pipe. Players can aim for completion within a shorter “target time” to amp up the challenge and earn additional rewards. Small as they may be, Treasure Road maps provide that frenzied arcade-style vibe that tends to be lacking in certain main campaign levels.

These fun diversions are also partly interwoven into the progression system. They offer a quick way to nab The Forgotten Land’s in-game currency, Star Coins, as well as coveted Rare Stones. These resources can be spent in the game’s main hub - Waddle Dee Town. Here, players can buy displayable figurines, temporary buffs, and upgrade/evolve Kirby’s powers.

Supplementing these coins and stars are the aforementioned Waddle Dees. These little guys can be found hidden in the campaign and are rewarded by beating secondary tasks in each stage. The game cleverly integrates these living collectibles in the hub, as freeing more of them enables the construction of new buildings. These structures bring extras such as cinematics, health-restoring food, and even minigames like fishing and “Tilt-and-Roll Kirby.” 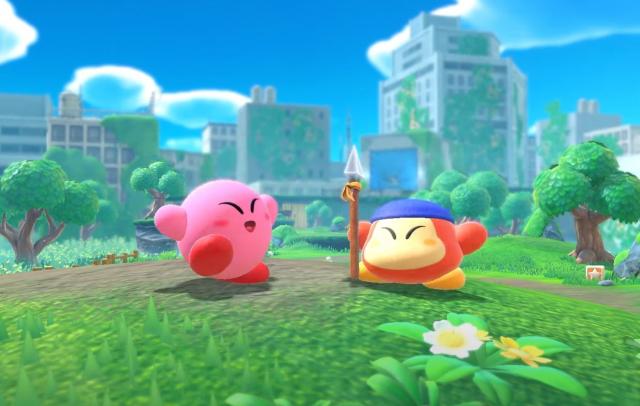 Aside from the timed challenges - and epic post-game stages - perhaps the most notable extra is the hub’s Colosseum. Here, Kirby can revisit a lineup of bosses in order to test out new powers and farm Star Coins/Rare Stones. These marathon sessions truly put your skills to the test, especially when clashing with unlockable, more ravenous “Phantom” versions of each boss. Finally, the game allows players to team up with a friend or sibling in a well-crafted co-op mode. While a degree more restricted in his moveset, a second player can take control of a bandana-wearing, spear-wielding Waddle Dee to amp up the chaos and grant a helping hand.

Kirby and the Forgotten Land reminds fans of what makes this charming franchise so uniquely fun. At the same time, Nintendo and HAL elevate the formula with Kirby’s range of strong and often absurd powers, dense 3D settings, and (relative) depth through upgrades and extras. This is supplemented by its presentation, with vibrant eye candy, lovely music, and a quasi-post-apocalyptic vibe that spurs the imagination. While the core campaign is fairly short and straightforward, there’s plenty to offer for those who delve deeper into this majestic journey. Simply put, this is a delightful platformer from start to finish; one I wish could have gone on longer.

This review is based on a digital copy of Kirby and the Forgotten Land for the NS, provided by the publisher.

Must be a typo

Man, the past few weeks have NOT been kind to this game.

Call me crazy, but after playing this game, I want Platinum to develop a Bayonetta style Kirby game. The boss fights in this game gave me a Bayonetta for kids vibe, and I think that's a concept that hasn't really been done well to my knowledge. Something that lets you do the same over the top cool shit you can do in DMC style games but with a vibe that's suitable for kids and a matching difficulty level.

Really need to get around to play this.

Thanks! Hopefully it's at least somewhat close to the entertainment level of the April 1st rendition haha

It's easily just as good, if not better. It's easy to make something entertaining if you can make stuff up the whole time; it's a lot harder when you have to write about and provide a genuine evaluation of something that actually exists while still being entertaining. You did a great job with this writeup.