While I do my best to avoid letting external factors influence how I review a game, I’ll admit it’s something I’m not perfect at. When you come across something that's clearly a passion project and not another soulless, by-the-books, over-monetized AAA cash grab, it’s hard not to appreciate the sheer earnestness behind the effort. Labors of love are increasingly rare, and it’s great to see a new studio put something out there on the market that was obviously intended to connect with people and perhaps even give them a much needed escape out of an otherwise busy and often terrifying world.

I say that up front to preface this review with the fact that I take no joy in writing this review of FixFox. I wanted this game to be good. It’s oozing with earnestness and a desire to just bring people joy, like a new artist showing off their first painting, and that’s obvious from the moment you boot the game up and a friendly tune accompanies a hand drawn title screen. But all the genuine thoughtfulness in the world can’t hide the fact that this is one the most uninteresting and mechanically barren experiences I’ve played in some time. And I just played Babylon’s Fall a month ago. 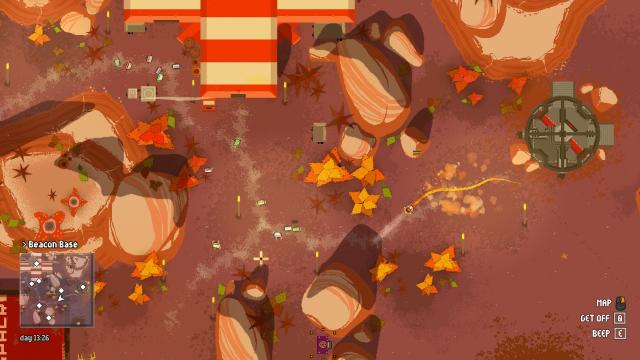 FixFox is the first game brought to us by Rendlike, a new indie studio based out of Prague and, at least as of the time of writing, staffed by a single person. So not only is this review like telling that earnest artist their drawing sucks, it’s like telling a first grader that their loving attempt at drawing mommy and daddy is absolute garbage before taking the puppy they just got for Christmas and euthanizing it right in front of them.

But that’s unfortunately my job, so here we go. The premise is that you are the titular FixFox, potential distant and far less wealthy cousin of Star Fox. Truth be told, I’m not really sure why you’re an anthropomorphic fox. The story summary at the start gives a rather weak excuse that humanity basically became animal-hybrids after… climate change made things cold… making DNA splicing the apparent obvious solution rather than putting a jacket on, but whatever. Maybe Rendlike really just wanted the playable character to be a furry. 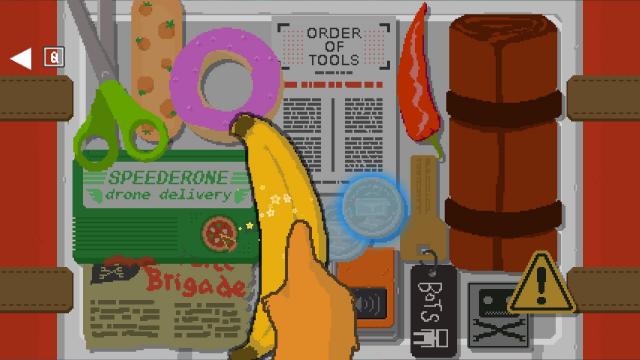 Anyway, once you come to grips with your new fuzzy coat and take advantage of it by getting kicked out of Rainfurrest, you begin the game proper, which involves fixing things, to probably no one’s surprise. How that works is you explore a series of open-ish worlds from a top down perspective, and when you come across a broken device the game switches to a more point and click format where you fix the device by applying the correct tool to the broken part. You can find various tools scattered throughout the overworld and whatever challenge is present comes from remembering to explore enough to have a full assortment of tool types at your disposal.

And… that’s it. That’s pretty much the core gameplay for the entire experience. There are a number of side mechanics that show up occasionally, like some very limited top down flying segments in space, and a frankly bizarre addition where you have to move your mouse to make your character eat food, but these are few and far between (sometimes for the better; I don’t think I’ll complain if I never have to make someone manually eat food in a video game again). Additionally, the aspect of fixing things never really becomes more challenging as the game progresses; there’s never much thought or cleverness required from the player after figuring out which type of tool solves which kind of problem. The only shred of a difficulty curve comes from later fixes tending to require more stuff, which is less a test of skill and more just how willing you are to forage in the dirt. 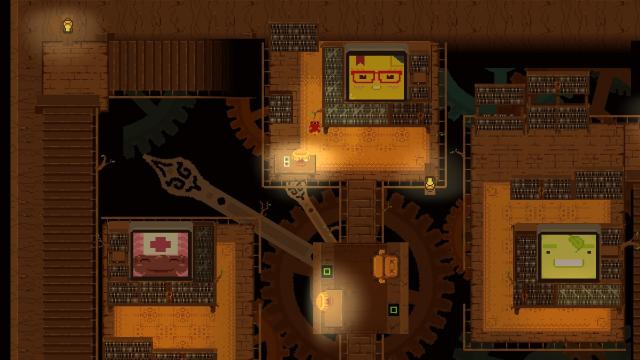 One missed opportunity that springs to mind is the radio system, which I imagine was initially intended to restrict the player and require them to think strategically in some way before it was tossed by the wayside. At the start of the game, it’s established that for various odd reasons that certain factions on the planets you visit dislike your character scavenging for items and repairing broken machines. Find too much stuff, or fix too many things, and they’ll show up in some spaceships and steal stuff from you. It could’ve been an interesting mechanic, but the player has the ability to, at any time, walk over to one of a myriad of nearby radio towers and reset the counter for items you can find/fix before you get robbed. There’s no cost to doing this outside of the time it makes for this minor detour, so it winds up just being an annoyance rather than a strategic element you have to factor into the game. Perhaps some kind of limit on the number of radio resets in a given time period could have made this an interesting mechanic.

Unfortunately, this all leaves FixFox without much that engages on a gameplay front. While not every game needs to be an incredibly demanding experience with a wealth of complex mechanics to learn and master, I do think games need to engage players in some way. Challenging gameplay is one way of accomplishing this, but it’s hardly the only possible solution. A title can have a great narrative, be especially charming or witty, or provide a very visceral experience that may be less notable for how complex it is and more for just how satisfying it feels to perform. 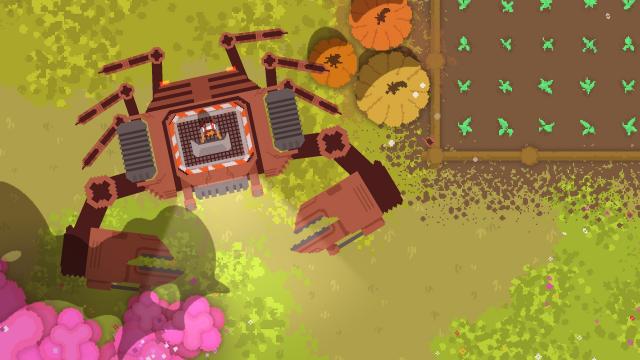 FixFox checks none of these boxes. I’ve already touched upon how the gameplay is unfortunately pretty bland and never evolves in any significant fashion, but the same is true of the writing. I’ve never really subscribed to the idea that a game can “try too hard,” but FixFox’s attempts at humorous dialogue might be what convinces me that it’s possible. Explaining what makes witty writing work is difficult, especially since quality writing is such a subjective venture, but the sheer amount of running gags or wacky side characters with overbearing personalities just gets tiresome. Humor is something that requires a touch of subtlety and restraint, and hearing my robot companion freak out about “space germs” for the 20th time today just winds up annoying me rather than endearing me to the character like it’s supposed to.

If there is one thing I can recommend FixFox for, it’s the aesthetics, which feature some very visually pleasing pixel artwork and good environmental design as well. There’s a lot of color variety on display, so the game never gets boring to look at. The music is also good, even if a bit sparse. I think a more consistently noticeable soundtrack could have done a lot to liven up the venture, but for a one person studio I won’t fuss too much about that.

As much as I would like to translate that one nugget of positivity over into an overall recommendation for the game, I just can’t. You can clearly tell Rendlike wanted to make something that would make people happy, and I can applaud that. Unfortunately, if the road to hell is paved with good intentions, the road to a boring video game is lined with safe design choices, and that really is FixFox’s problem. It’s too safe; unwilling to challenge or threaten the player in any meaningful way. I wonder if the desire to create something that would make its players feel happy and “chill,” as the youth say these days, resulted in a game that ultimately failed to stand out in any way.  Perhaps if you're looking for a game that will let you just turn your brain off and kill a few more of those precious seconds between cradle and grave, FixFox might appeal to you, but for anyone else it's hard to argue this is worth your time.

But don’t worry too much about it, Mr. FixFox. At least it wasn’t as bad as the last game that cousin of yours made, and he blew a couple of million dollars on that to boot.

Alright the puppy analogy was harsh and I had to stop reading there, but good on you for giving a small indie game a chance I guess. The rest of the review was probably very on point about it.