Out of respect for the reader’s time, if this review was a literal reflection of Monark, the first few paragraphs would start out strong, if maybe a little low budget. They would encompass compelling machinations, with often interesting, if at times difficult, subject matters. A copy and paste of the middle paragraphs to unbalance the pacing would then follow, with some minor though important alterations to each one, so that the reader doesn’t get too frustrated, while alluding to being an end, despite clearly never really being one. The final paragraphs would be somewhat more streamlined and focused again, but a relative amount of repetition by virtue of the early ideas not being built upon a great deal will be prevalent - by that point you, the reader, may well have spent many more hours than you would have liked in trying to finish this piece.

If you're still with me, it may be that you enjoy a bit of a grind or, like a Christopher Nolan film, your concept of time is skewed so heavily it no longer carries the same meaning, so let us begin. Developed by Lancarse, a Tokyo-based company with several former Shin Megami Tensei staff, Monark, dubbed a ‘new school RPG’, places us central to the ongoing fortunes of everyone inside the Shin Mikado Academy. After a madness-inducing mist harbouring otherworldly distortions has descended on the campus - alongside a mystical barrier separating the Academy from the outside world - it’s up to the player, as the blank male protagonist with no memory, and his four fated companions, to save the school, its occupants, and to find himself amidst the ongoing chaos. 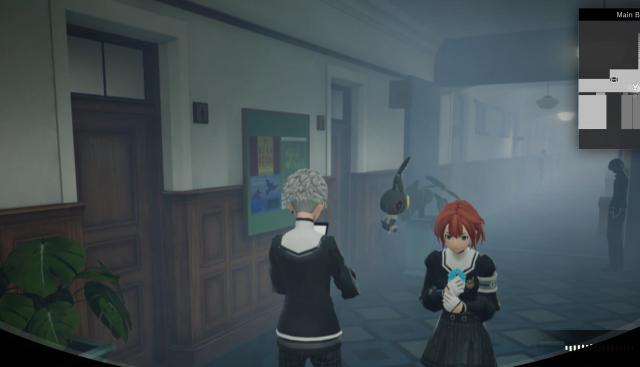 The opening narrative, a dreamlike psychology test which scores your Ego based around the deadly sins, serves as a novel device to set your build and inform what your early combat options will be in the shape of a fiend battle companion. From there, finding yourself awake in the mist, you're quickly presented with Monark’s main gameplay elements: roaming the academy’s corridors and classrooms (be they mist-filled or clear), and a command-based free-form tactical battle system. No battles take place within the walls of the academy; the roaming element, which feels like more of an investigative interaction, is reserved for locating information and items, conversing with other students, and puzzle-solving. The exception to this is that when traversing mist-filled areas a MAD percentage gauge will slowly fill, and ‘unsettled’ trapped students dotted about the mist will erupt with madness if you get too close, consequently filling the gauge faster. It’s an idea with potential, but as maxing out the gauge after the opening section just sends you to the infirmary with a reset to zero, it feels like a missed opportunity with limited consequence, barring an annoying controller rumble and entering a battle with a very high MAD rate.

Within mist, distortions form connections between our world and the ‘otherworld’, a metaphysical plane of existence accessible through the manifestation of changeable signs, in this case phone numbers. Tactical battles take place exclusively in the ‘otherworld’, whereby your first encounter you become the eighth ‘pactbearer’ entwined with the powerful daemon Vanitas, one of the titular Monarks. This enables ‘imagigear’, a personification of your Ego, which equips you with the means to fight and control fiends. The tactical battles from the outset are beautifully balanced, initially hosting three party members, increasing up to a total of six come late game, and there is a lovely strategic risk versus reward structure in place. Virtually every skill either consumes HP or increases the MAD gauge. Hit 100% and that character bursts into madness for three turns with a huge stat increase, before becoming uncontrollable and exploding when it expires. Many of my early battles were won or lost by the merest of margins, and often greeted with a vociferous fist shake or head in hands from frustration after gambling to win and failing. Much like a game of chess, of which various designs are clearly based on, taking your eye off the ball and making one mistake can be fatal to your chances. 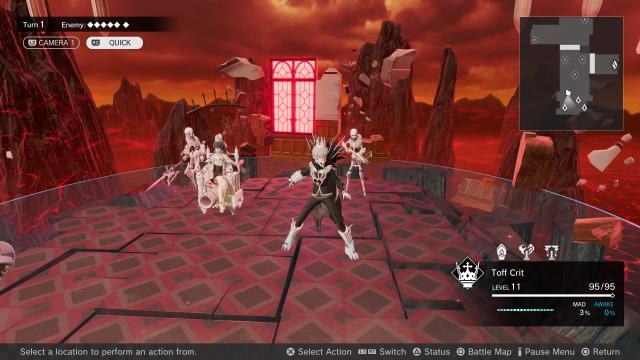 Unfortunately that early battle balance is not upheld throughout, as the game lurches from the seemingly unfair (requiring level up grinding to progress early on), to unlocking skills later on which enable strategies that virtually negate any risk/reward element. The lack of battle variety over my 90 or so hours with the game also didn’t help matters. There are a handful of elements introduced relatively early on that cause status effects, damage, or healing, and barring a couple of additions like cannons and transporters, there's not much else for the remaining game that attempts to mix or liven things up. The same issue can be pointed towards the majority of enemies and battle arenas, which vary relatively little over the course of the game both aesthetically and tactically; it's pretty much the same old bag of bones from start to finish. There are occasions that pique your interest, thanks to the always interesting special character designs of So-Bin, like several pactbearers and their Monarks, but unfortunately by the game's end the early excellent tactical battles become something of a chore.

The overall narrative does a better job of keeping the player engaged throughout, though it too is not without issues. There are some really interesting characters and themes explored, especially in the first act regarding the seven pactbearers and their Egos. These often centre around trauma, and how it’s dealt with as an individual and as a collective. It's often handled with a deft touch using the somewhat ambiguous greys of an irrational world when it needs to, as opposed to always purely good versus evil. 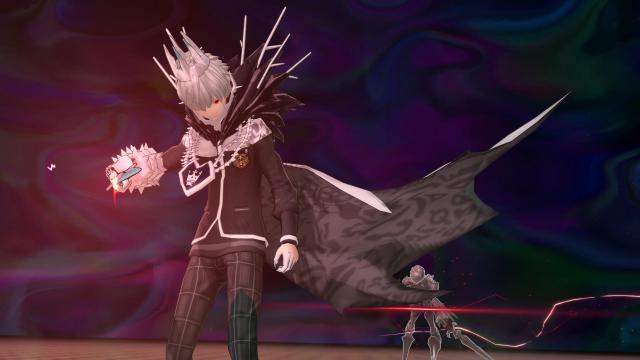 A slight word of warning while wanting to avoid story spoilers: some of the subjects broached may be psychological triggers for some, given they touch on potential dark areas of the psyche, such as teenage deaths, though the game is never over-graphic in doing so. Fortunately, it doesn’t become a depressing slog, preferring to ultimately point towards the light in the darkness, focusing on how our experiences can also resonate with others to bring us together. Proceedings are also lightened by Chiyo’s cheerful innocence and her relationship with ‘Mr. Bunny’ (Vanitas), while Kokoro’s constant thought process towards yakisoba bread (‘carbohydrates incarnate’) is always a source of amusement.

The narrative stumbles however through a somewhat messy middle section. I can see the thought process in focusing on each of the four fated companions individually, but as the player essentially plays through similar paths - and battles - multiple times, albeit with some key differences, in an already long game it has the effect of badly stalling narrative momentum. Dialogue can be skipped, but as not all of it is a repeat, doing so may mean skipping a key new story element - it's tantamount to narrative roulette. The game pulls itself back together for the finale, but the lack of effective streamlining management hurts the whole affair. Perhaps the biggest shame though is the narrative being undermined on occasion due to what appears to be a lack of budget. There are some real heartfelt and tragic moments that don’t hit as they should, due to slightly awkward looking cutscenes. The lack of voice acting for the central protagonist highlights the issue, especially when in stark contrast the rest of the main cast do get full voiceovers. This is exacerbated further given that for a couple of lines of random dialogue he is given a voice. 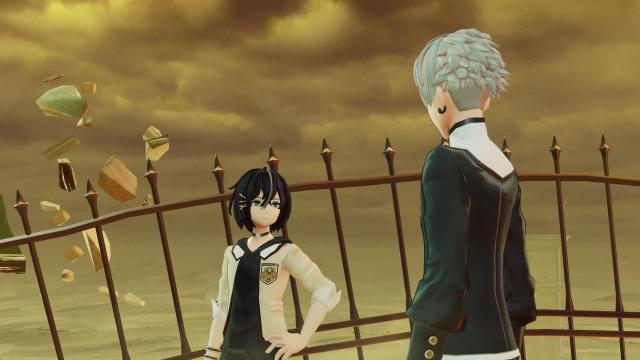 Despite that misstep, the voiceovers actually do a pretty good job overall. Vanitas may be a little bit hit or miss with his Shakespearian-like iambic pentameters, but his ambiguity (and general turmoil of others) adds plenty, as do most of the artistic elements, in creating the overarching atmosphere of humanity's darkness and light. It’s not the prettiest game, especially compared to some recent releases, and it’s often clear on what portions the budget was focused on, but there are plenty of nice details and artistry to be found in the likes of the Ego soliloquies, or the chess inspired character battle designs, to name but two. The music tracks are also surprisingly good, often bouncing between unnerving dissonant notes to a suave hook line with ease.

Monark is a difficult game to quantify into a score; plenty of artistic merits exist in direction, tone, and atmosphere, but at times they're undermined by a lack of refinement. An intriguing tactical battle system is there for good portions of the game, but at times it feels very unbalanced. The narrative and themes are largely compelling and engaging, yet structurally it meanders, stalling the flow. It no doubt has value and worth in what it offers, but suffers from profligacy where an effective streamlining would maybe have offered a tighter, more wholesome experience. As such it’s almost impossible to recommend to non-genre fans, and even for genre-fans any recommendation would have attached caveats.

This review is based on a digital copy of Monark for the PS5, provided by the publisher.