Kingdom of the Dead (PC) - Review

I’ll admit that, despite my best efforts not to, I sometimes fall into the trap of judging a book by its cover. No matter how impartial I’d like to be, there are certain, more superficial elements about video games that I’ve come to associate with low quality games over the time I’ve spent as a reviewer. So when I booted up Kingdom of the Dead and was quickly greeted by a number of typos, objects failing to render properly, and enemies spawning inside of walls, I was thoroughly expecting to have an early contender for worst game of the year on my hands. 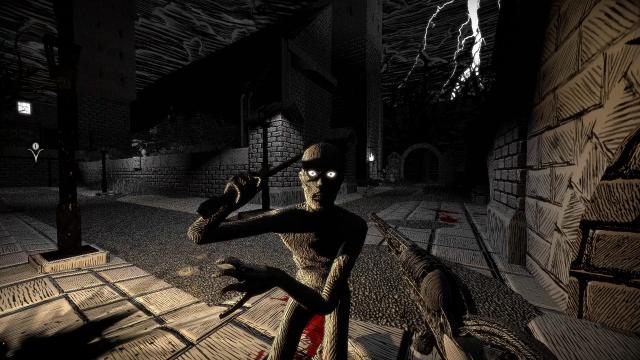 But that initial impression turned out to be mistaken. Kingdom of the Dead may not be a looker, and its status as a budget title certainly shows, but give it a chance and you’ll discover a title that is thoroughly and completely tolerable. Buried behind some initial stumbling is a true crowning gem of a completely acceptable game, and I’m pleased to announce that there are, in fact, worse ways to spend your money.

The plot, then. We play as Agent No First Name Chamberlain, a member of a secret government program designed to smack down the denizens of hell whenever they start getting too rowdy. In this particular instance, we’re tasked with foiling another attempt by Death to open gateways between Hell and Earth. Doing this means traveling to a variety of locales with lots of gothic architecture and politely requesting that the occupants settle down via hot lead to the face, delivered through a variety of weapons while bouncing all over the place like an over-caffeinated chimpanzee. 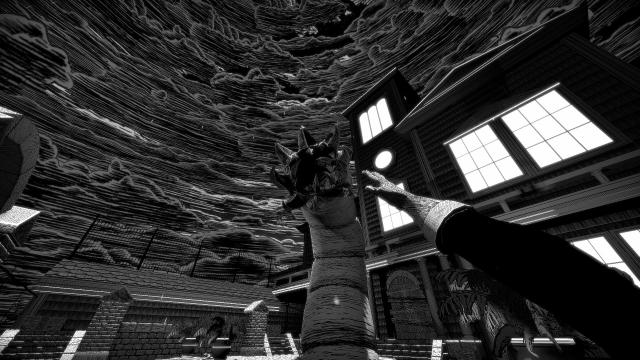 If this sounds a lot like a retro Doom or Quake title, that’s because it is. And like those games, the plot is a secondary concern at best. The gameplay is why we’re here, and it’s decently fun. Kingdom of the Dead is split into a variety of missions at eight different locations, each requiring the player to blast their way through an entourage of demonic hosts. The weapon variety on display is solid, with players quickly acquiring a shotgun, sniper rifle (that looks like an 18th century musket for some reason), minigun, bazooka, and more. Don’t get too attached to your weapons, though, as the game strips them all from you save for the pistol and default melee weapon at the start of each mission.

While the weapon variety is good, enemies are a little more hit or miss. Most of the standard enemies you encounter in combat are humanoids that either slowly lumber towards you or stand perfectly still and occasionally fire projectiles. As long as you can point a gun at the head of a target that’s moving slower than legislation through Congress, you’ll do just fine against the majority of baddies. And like Congress, on the rare occasions where things do pick up, you’ll want to run for your life. When some of the tougher enemies do spawn in, things can get chaotic, and it starts to resemble some of the frenetic, fast paced combat that defines the best movement shooters on the market. 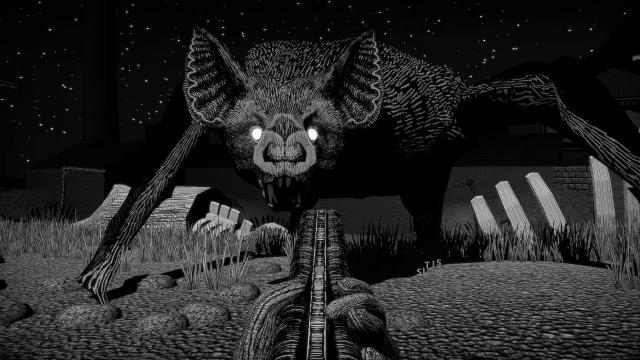 Unfortunately, these segments don’t start showing up consistently until the late game. As a whole, Kingdom of the Dead does feel fairly easy. This is especially true when it comes to the… what I’ll hesitantly call “boss fights.” Each level concludes with a showdown against a larger demon in control of a gate to hell who poses as much threat to your survival as a slight breeze. Each boss only has a single, easily avoidable attack, and most can be beaten with the devastating military strategy of “run in circles while spamming the minigun.” The only time I actually died while fighting a boss was the result of me forgetting which weapon I had equipped and accidentally blowing myself up with my own rocket.

The higher difficulties don’t do a whole lot to address the lack of challenge. As best I can tell, all selecting a higher difficulty does is spawn more enemies in, which certainly doesn’t fix the bosses, and ultimately doesn’t do too much about the moment-to-moment showdowns against regular enemies either, due to most baddies’ inability to move at a faster pace than a help request through Comcast’s customer service. It’s also a little annoying that the highest difficulty instantly fails you if you happen to kill certain non-hostile targets; I don’t mind that as an optional challenge, but having to redo the entire level feels a tad harsh for accidentally shooting the wrong thing once. 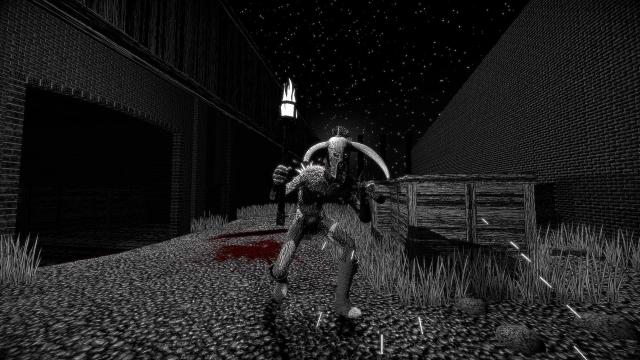 Still though, I can respect a game that is about having fun first and foremost and gets to the point. And Kingdom of the Dead does just that. It doesn’t waste your time with any filler, overly long cut scenes, or unrelated side quests. Within seconds of starting each of Kingdom of the Dead's nine missions, you’ll be blasting demons and bouncing around the room like a four year old who discovered his older brother’s stash of energy drinks. The core gameplay loop is also fun, to some degree. The general concept of 'move fast, shoot demons' is always enjoyable, at least to some extent, regardless of how unthreatening the enemies are or how many typos the game includes.

Which I suppose is as good a time as any to talk about the presentation, which is not so great, unfortunately. Dirigo Games lists itself as being located in Maine, and if that’s the case I'm genuinely concerned for how children are being taught the English language. Typos, run on sentences, and odd-sounding dialogue are commonplace. The story isn’t really a huge part of the title, so the end effect is really just that I ended up laughing at these flaws, rather than feeling like they hampered the overall experience, but it's still worth noting how poorly proofread this game is. 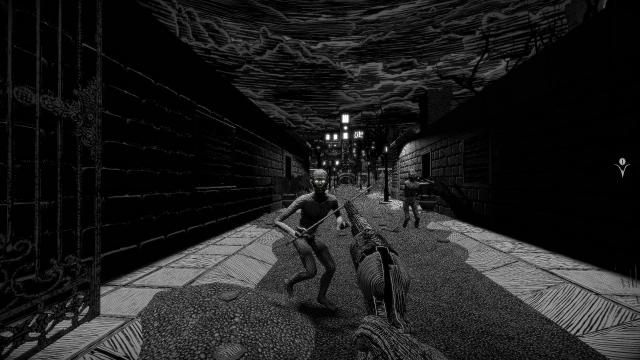 The visuals on the other hand are decent enough. The big graphical draw is the Madworld-esque black and white filter over everything, which is only interrupted by the occasional red blood splatter. While it looks nice in screenshots, the end result in gameplay is that enemies are often obscured by some of the darker parts of levels. Outside of that, Kingdom of the Dead looks decently pretty for the budget it's operating on, so if that’s the make or break factor for you then consider this another resounding “it’s alright” to go with the rest.

There are a few minor technical things I would be remiss in not mentioning. Enemies will occasionally either clip through or get spawned into walls, where they'll be unkillable but still able to shoot you, which is rather annoying. There are a couple of levels where the game just blatantly puts in invisible walls for… some reason, which can mean running into a dead end you couldn’t possibly see coming while attempting to run away from incoming cannon fire. Finally, sound effects will occasionally just not play, which is a little weird but not hugely disconcerting. 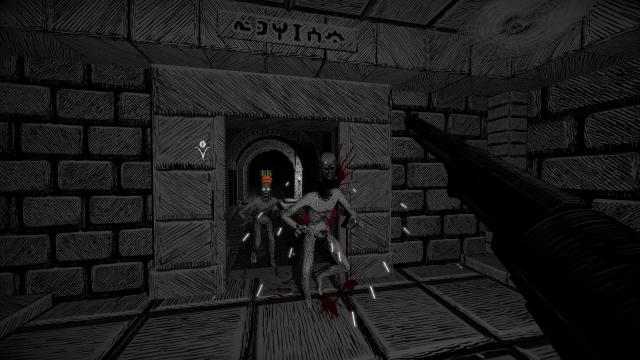 Overall, Kingdom of the Dead is an entirely passable use of your time, despite the lackluster presentation. The gameplay is fast enough and had just enough of the fun factor to keep me invested, even with some subpar bosses and mixed enemy design. It likely won’t win any awards, but if you’re in the mood for a competent movement shooter and don’t feel like replaying Titanfall 2’s campaign for the 30th time, this is an acceptable choice.

So this is better than Ghost of Tsushima in your book…

TWo years and I guess we're still not over this, huh?

For what it's worth, we didn't have a ".5." rating system when I reviewed Tsushima back in 2020, and if I had had it at the time I'm not sure if I would have scored it 5.5 or not. But regardless, yes, I would say the original PS4 release is about comparable in my opinion. Whereas the original Ghost is a game that I consider to be predominantly wallpaper with relatively shallow, bland gameplay and repetitive filler, Kingdom of the Dead is the exact opposite, with no wallpaper at all and reasonably engaging gameplay and no filler to speak of.

While I'd argue the Iki Island expansion improves on the original substantially and makes GoT a better experience than KotD, yes, I would personally say I enjoyed my time with KotD more than the day 1, PS4 launch of GoT.

Not gonna lie, I think you’re the worst reviewer here.

You realize a review is an opinion piece, right? So you have a different opinion regarding one game you have strong feelings for, doesn't mean he's a bad reviewer. Seems kind of silly to cry about it in the comments of a game you probably never even played. Does the whole world really need to agree with you all the time?
Let it go, dude.

This isn’t about one single review. And you say that, yet come cry about what I think. 👌

Why did you refer to a completely different review if it's not about that one review? Could it be that you find it hard to cope with criticism on something you like?

Will you continue this freudian projection of yours for long?

If all this riles you up so much, just go outside and let it go dude.

But… You’re the one all riled up over my opinion.

That job is already taken!

KINGDOM of the DEAD