Having been acquainted with Mobile Suits, Orbital Frames, EVA Units, A.G.W.S, and powered armors, I've come to accept a harsh reality, one that has nothing to do with baking cakes for friends or signing into law universal health care reforms. If I'm watching an adolescent step inside of something with two arms, two legs, and a head, death and destruction will follow in their wake - it's not my fault, those are the rules. Blackwind holds true to these guidelines, providing a healthy mix of chaotic combat, platforming, and puzzle solving. Some performance issues and rough edges are evident from a production value standpoint, but do little to hamper the fun to be had by everyone.

In the distant future, mankind's grasp has reached the stars themselves, as colonies start to seed across the known universe. Medusa-42, an allegedly benign planet, becomes the host for the mining operations of the peaceful Elite Forces of the United Colonies. An attack on the vessel carrying a prototype AI Core 2.11, Mark II Battle Frame (designation: Blackwind) causes a chance encounter between the mech and a 'Human Symbiote' (designation: Jimmy). Together, the two search for Jimmy's missing father, unraveling the mysteries of the planet and the element 'B-Wolfrium'. 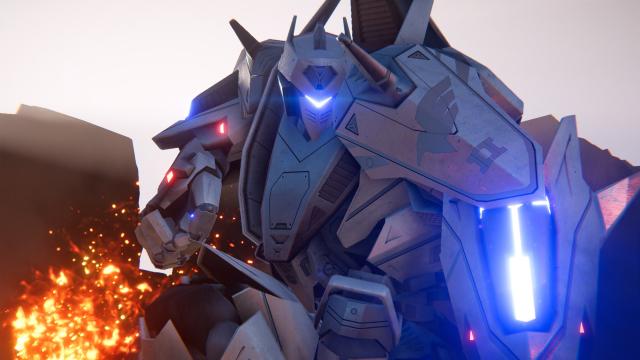 Though the dialogue itself isn't anything special, the story in Blackwind is surprisingly engaging for an indie game. There are more unexpected twists than one might expect, and the best part is that it's not a mere template that only serves to give the game somewhere to exist. It's no Everhood, but I can honestly say that by the time I hit the 65% mark, I was playing just as much to see how it ended as I was because of the entertaining gameplay - a rarity in my experiences with indie titles.
This says quite a bit, as the overall production value of Blackwind is itself a step above most of its contemporaries. Brave enough to explore the graphical boundaries beyond the SNES-PS2 eras, Drakkar Dev takes the step forward I wish more small developers would attempt, and the results are impressive. Aside from the curious amount of gym equipment strewn throughout the U.C. Barracks (these guys must have been ripped!), Blackwind runs the gamut of environments to explore, with 15 different areas, including forests, wastelands, mountains, and underground caverns. The story is bookended by wonderfully drawn scenes that are far more fleeting than they should be. There's a price to pay for this beauty, and while it's worth the cost, you have to wonder whether you should be paying it in the first place. 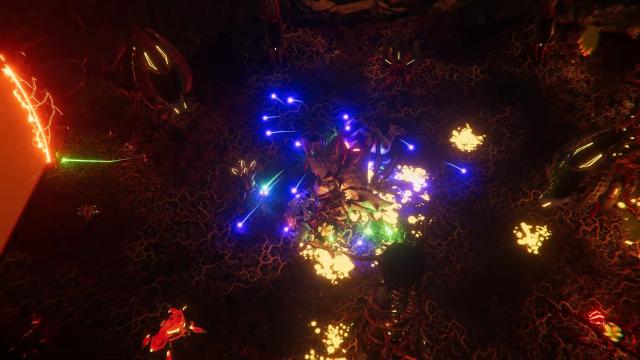 There are several elements that make up the gameplay of Blackwind, but the combat is the most significant. This is also where the toll for the graphics is paid, as the framerate fluctuates drastically depending on the pace of the action and locale. It's not a deal-breaker, but it's both noticeable and constant.
Fighting enemies is done from an isometric, dungeon-crawling perspective. Those familiar with X-Men Legends or Marvel Ultimate Alliance will feel right at home shredding through alien orifices. Proper sequences of light/heavy attacks produce special moves; finger lasers and missiles compliment from long range, opening foes up for devastating Execution Attacks. 'Black Mode' is a Devil Trigger-type buff that slows down time, increasing Blackwind's damage output beyond normal parameters. Combat is frantic, occasionally frustrating, and always fun – the way it should be. 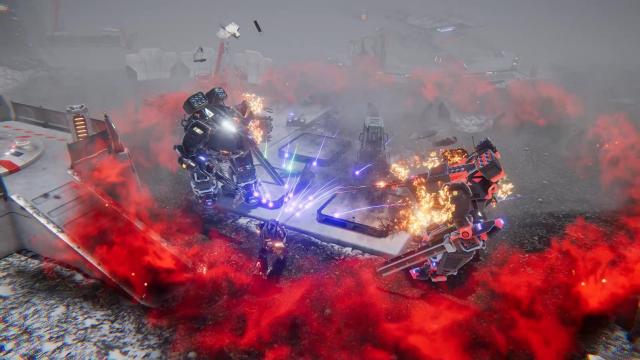 Exploration and puzzle solving make up the remaining bulk, highlighting Blackwind's overall quality. Platforming sections consistently show off their design by using space efficiently, belying their complexity. Puzzles can take tens of minutes to solve before you decode the proper sequence of events. Upgrades, along with additional skins for Blackwind, are well-hidden throughout Medusa-42. It takes a little thinking to progress in this game, for which I'm thankful.
Supplementing this aspect is the use of a drone. Detaching itself from Blackwind (causing the mech to lose its double-jump and ranged weaponry), the unmanned vehicle is used in its own mini-game of sorts, guiding it through ventilation systems and rooms that are beyond Jimmy's range. The controls during these portions are crisp and the framerate is consistently smooth. A second player can take control of the drone during battle, creating a co-op experience akin to Super Mario Galaxy. If anyone from Drakkar Dev happens to read this, a bullet-hell game in the vein of Ikaruga or space shooter like Asteroids might be a direction to consider in the future - you clearly have the talent! 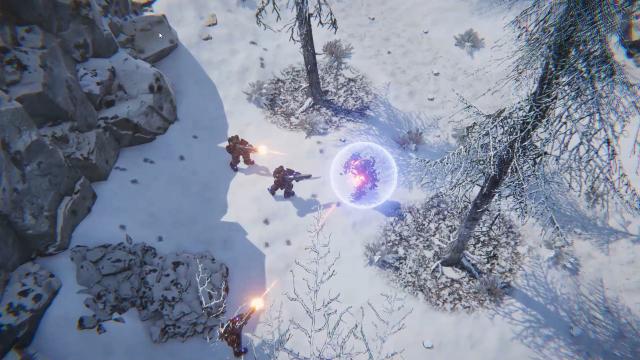 Augmenting Blackwind's arsenal are three skill trees of passive and active abilities. 'General' enhances mech traits such as dash length or Black Mode duration. 'Combat' allows the player to tailor fights to fit their needs; ranged enthusiasts can increase the amount of shots fired each round, while berserkers unlock new button inputs to increase the mayhem. 'Special' allows for the development of unique weapons like missiles and shields. Certain skills complement one another, creating pseudo-builds; Power Extraction and Power Wave are a devastating pair that trivialize most encounters during the later portions of the game. In general, there's a strong amount of customization that requires several playthroughs to experience in full, and all manners of playstyle are encouraged.
Blackwind isn't without flaws to consider. I've mentioned the erratic framerate (a side effect of its multiplatform release), but worse are the number of small issues that add up to the point of holding everything back slightly. A checkpoint system exists in lieu of being able to manually save, which comes with the consequence of losing 25 minutes of progress after failing several waves of encounters. The lack of invulnerability frames on Blackwind means this can happen frequently if players aren't aware of their surroundings. Scariest of all is getting clipped into the environment and being unable to move. I can recall half a dozen instances of this occurring; and even though this only forced me to reload once, the fact that it could happen at any time was constantly in the back of my mind. A Day 1 patch could potentially alleviate some of these issues by launch (add full-sized maps please!). 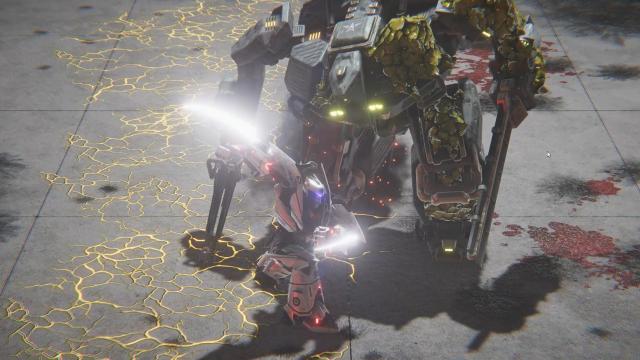 Blackwind is an ambitious game that proves it can do it all – just not at once. The combat is satisfying and frequent, but the framerate will buckle when the game is at its most fun (even on a PS4 Pro). The story is more satisfying than it lets on, but the occasional line reading deflates the narrative in spots. Puzzle solving is engaging and platforming is well done, but without a guiding hand it can be tough to discern at times – and that's alright. Like puberty, progress is an awkward, gangly stage of existence few want to go through, but Drakkar Dev is courageous enough to undergo the process and we should show our gratitude. Whether solo or with a friend, Blackwind is worth a look at should you need to scratch that mech itch or satiate your destructive urges.

This review is based on a digital copy of Blackwind for the PS4, provided by the publisher.

So excited for this. I got the PS5 physical even tho I don't have a PS5 yet lol. I love mech games