Review - We Are The Caretakers (XS)

Tweet
by Daniel Parker , posted on 01 November 2021 / 2,347 Views
Usually, one can't go wrong with a good, speedy platformer.  However, while Aeon Drive undoubtedly has its good, stand-out moments, various grievances hold the game back from being more than your average platformer with a unique gimmick.
The story follows Jackelyne "Jack" Tywood, who crashlands into Neo Barcenola while fleeing a multiversal war.  It's a futuristic tale that is honestly better if you don't think too much about the storytelling, as time doesn't work in the way the game claims, and a dimension is a unit for measuring a direction in space and not its own universe.  Personal annoyances aside, the dimension engine cores onboard Jack's ship will become unstable and destroy Earth (FD52) in 30 Seconds, requiring her to use a time pocket to traverse 100 stages as she attempts to stabilize the dimensional engine cores. 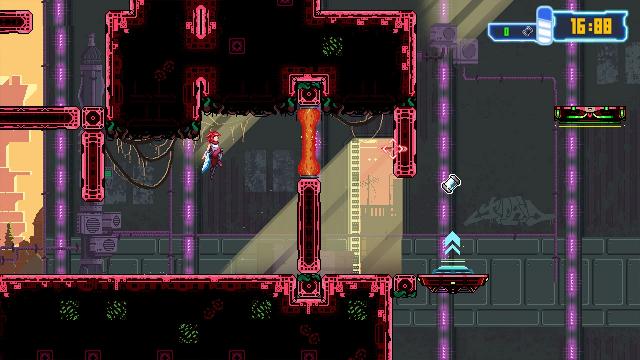 As you learn Aeon Drive's gameplay mechanics, speeding through levels, you'll use your dagger to teleport across the map.  It's an exhilarating, fun mechanic, and the best thing about the game when it functions as intended.  However, due to the throw and teleport functions of the dagger being mapped to the same button, and no visual indication as to when the dagger is in your inventory, it's far too easy to throw it without realizing and then accidentally teleport yourself into unintended areas.
Other mechanics, such as dashing, may be great for covering short horizontal areas, but momentum doesn't carry over into other actions, so you cannot use it to increase jump trajectory.  Moreover, aerial movement in general feels restrictive, as jumping from a wall will always send you at a 45° angle, with no mid-air adjusting, making it difficult to get into some areas that it seems Jack should be able to fit into.
Jack also possesses a sword that she can use to take down enemies, however this too isn't without flaws.  Enemies don't immediately explode.  In fact, Jack's sword slash is faster than the enemy death animation, so it can take two or three slashes before you've realized your sword has made contact.  But at least you're able to slice through projectiles and clear hordes of enemies without worrying all that much about bullet spam.
Even though there may be issues regarding the gameplay, the sprite work is sharp, colorful, and well-animated.  Whether you're scrolling through menus or zipping through the levels, Aeon Drive looks great, with the minor exception of the lackluster opening sequence. Sector 7 is probably the best-looking area in the game, with its green-tinted skies (as opposed to the dim night skies in most other sectors) and the futuristic building structures populating the background.
The same cannot be said for the soundtrack, which is incredibly generic as if it's been ripped from an early 2000s cartoon.  The SoundFont is the same throughout the entire game too, so even though each track is technically different, they're so similar that they all seem to blend together. 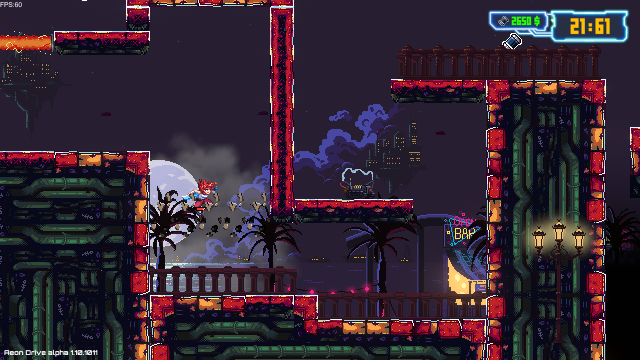 As far as the level design itself is concerned, it feels like a case of quantity over quality.  As previously mentioned, there are 100 levels in the game.  More accurately, 100 levels spread out evenly across five visually unique areas, with every other area being a palette swap of the one before it.  Each area introduces a new stage mechanic that's also reused in subsequent areas, but this has the side effect of meaning that no single level in the game offers anything truly unique, other than the layout of its set-pieces.  This includes enemies, as you come across the same four enemies throughout the entire game, and sadly there are no boss encounters.
The structure and layouts of the levels can also feel slightly random; enemies will fire projectiles off-screen that you cannot react to or see until after a jump pad has tossed you into the gunfire.  And oftentimes the maps are so bad at guiding the player to the exit that you'll find yourself going in a circle trying to find it.
Aeon Drive's main draw to keeping players coming back is the global leaderboard system and collecting diamonds to unlock various endings.  There are also other collectibles in the game that unlock various pixel art items based on the game's lore, including what looks like a boss character who is strangely absent from the game. 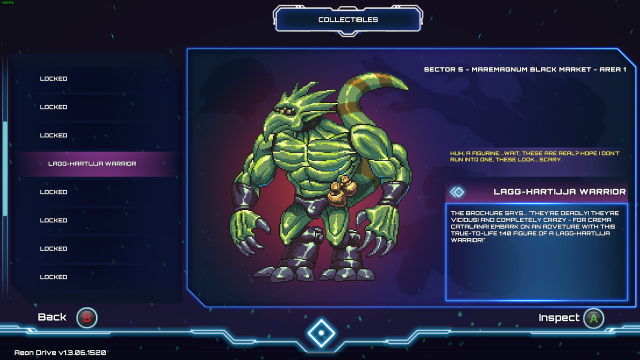 100 levels may have been an impressive figure many years ago, however we now live in the age of roguelikes, where a stage can have a new, unique layout every time you play, or you're given new abilities throughout your play session to change not only the paths you take but how you play the game, as well as having various themed enemies and bosses.
It's hard to stay invested in Aeon Drive because, despite the high level count, it's much more limited in scope than many of its rivals and feels slightly incomplete.  Not only does it feel like there should be more to the game, but every aspect of the player-controls feels as though it's missing something - you don't have full control of your jump height; crouching is useless because you can slice through projectiles or dodge under obstacles; and dive kicks are vertical actions that should be used to reach the ground quickly but will often kill you as you plummet into a pit. 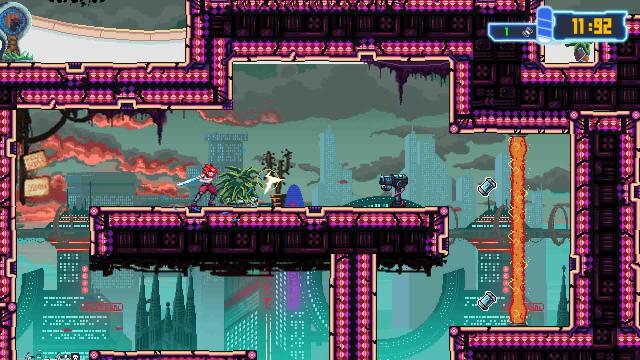 For everything Aeon Drive does right, it gets something else wrong.  It certainly has its fun, high-speed moments - when the level design permits - but the story is full of holes and in an age when there are dozens of other 2D platformers that do more and better, it's hard to recommend Jack's adventure.

This review is based on a digital copy of Aeon Drive for the PC, provided by the publisher.