The set-up of a game's ultimate fail state, Game Over, can occasionally reveal more than you'd suspect.  Similar in its starkness to Dark Souls, DEATH is emblazoned on the screen across a pitch-black background here, with the action still visible through the lettering; what's more, your lifeless corpse won't stop enemies from pounding it further into the ground.  It makes sense in context.  Who wouldn't start rampaging when they're knocking on Death's Door?  Beyond a simple 'game over' screen, Acid Nerve (Titan Souls) explores this potent idea through each aspect of the game - narrative, gameplay, art design, etc. - in obvious and understated ways.  Is it as caw-some as it seems or is this another disappointing sophomore outing?

Step into the talons of a nameless crow, known as a "Reaper" in this world.  Life isn't easy working for the Reaping Commission, the supernatural agency in charge of harvesting souls.  There's a bureaucracy within this monochromatic world that you – fortunately – get to avoid today.  Punching in the clock typically means collecting a monster's soul that won't leave life peacefully.  Upon succeeding, you're subsequently ambushed and robbed of your objective.  Now faced with the potential of mortality lest that soul is returned, you're impelled to recapture it at all costs.  This demand becomes exponentially tougher once said thief provides a new ultimatum. 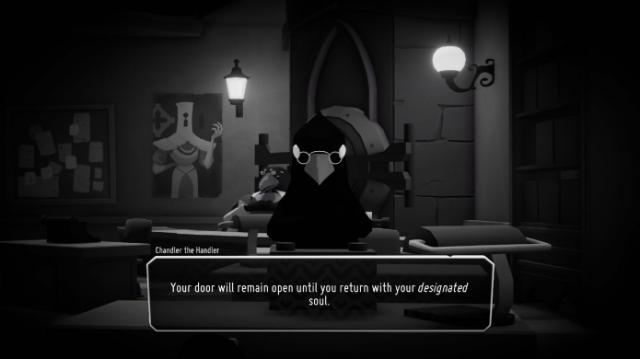 This new goal will be familiar to any Legend of Zelda fan: three of the eldest souls within this land must be finally laid to rest.  Difference being this Geriatric Triforce don't wish to, well, ever be freed of their mortal coils.  The bosses’ justifications and occasionally brash actions are often sympathetic; in fact, one in particular is downright horrifying when thinking further about its implications.  Yet there's typically a judgmental light against these veritable titans consolidating power past their due date.  There's a great amount of (dare I say) anti-boomer bite within the subtext that I didn't expect; less surprising was my hunch of this team being in the UK.

Fortunately, Mark Foster's terse writing doesn't hyper-focus on this aspect.  The collection of quirky side characters provides a helping of good humor as well.  Those quality laughs not only come from a script but in the editing as well.  Both qualities lend the experience an intangible sense of warmth for its various inspirations.  It's hard to succinctly describe without giving too much away that you’d rather discover, but it's one of those feelings where you implicitly sense each element is well-considered.  It’s a bit slow to start, but sticking with its granular world-building approach pays off. 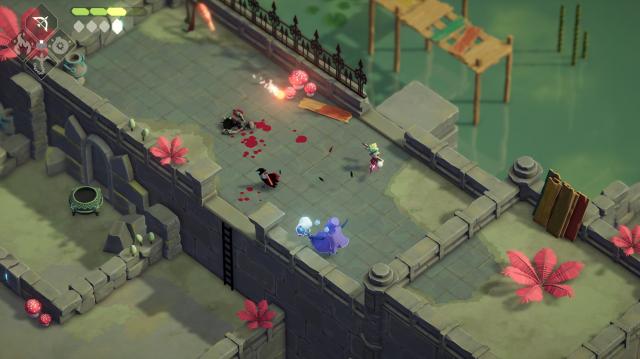 More immediately understood (for better and worse) is the gameplay.  Through and through, Death's Door is an unabashed homage to the isometric Zelda titles of yore.  There's a deep-rooted fairytale atmosphere to the starting action.  The Wizard of Oz-esque opening where Reaper egresses the monochromatic limbo to explore the colorful 'real' world takes you back to more familiar territory.  Armed with a melee weapon and a magical bow, this clever Corvus can roll, slash, or fire ranged attacks at bosses and minions alike.

Starting to sound familiar?  If there's one contentious point in this overall package it's that the combat hits a typical routine early on.  It's all about reading telegraphed attacks, getting a few slashes in, and rolling away to avoid an enemy's rebuttal.  Depending on the equipped weapon, your basic chained attack is either slash-slash-slash or slash... and then another subsequent slash.  This rudimentary baseline, along with charged swings, is the combative main course throughout the 7+ hour main campaign – with more hours promised after the rolled credits.  There are no frills like in-game weapon switching, parrying, or ripostes.

Familiar isn't the same as tiresome though.  By rigidly maintaining an age-old template, Acid Nerve put its team size of two people – plus independent contractors – to good use by polishing the hell out of it.  Basic attacks, charged strikes, and ranged magic hits all have this precise audio-visual flourish.  The interplay of melee and magic is one of my favorite components: your magic meter only replenishes after successful slashes against enemies, red mushrooms, or smashable vases.  Since the latter two typically aren't available during combat, the ebb-n-flow between melee and ranged avoids feeling stale. 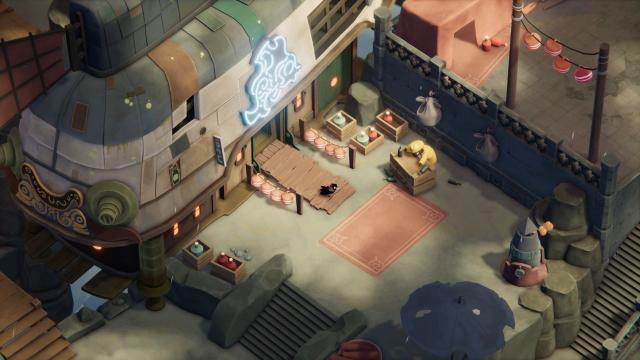 Beyond simple sensations, the level design compliments combat while also keeping you occupied with exploration.  To the likely chagrin of some, there's no in-game map – neither for the colorful fantasy world nor the black-and-white Reaping Commission offices.  So it says a lot about how well-integrated this collection of layouts feels.  Every passage barricade or hurdle that needs a special tool is like an icon for you to remember, as it softly whispers "oh you'll be back."  Mentally mapping out all of these interlocking areas was a joy in itself; moreover, the spread of fun detours compliments pacing.  Aside from a few instances, I'm convinced this team has a secret formula for when to focus on puzzles, light combat segments, or pure gauntlet-style arenas.

Beyond the combat's simplicity, there are some other quibbles to consider.  For as tight and as polished as combat feels, I’m still suspicious of the hit detection against the final boss (for the main campaign).  The more linear, focused segments after completing the Zelda-esque dungeons didn't really click for me either.  The first one worked well, but these portions for the second & third dungeons were the rare moments where pacing felt artificial.  Finally, I'm not 100% sold on the health system.  Having to find seeds within the world and plant those in unique flowering pots for replenishment does lead to exciting close shaves, but the frequent backtracking to old planted pots gets tiring.  Why not have a one-use consumable that costs three seeds to make? 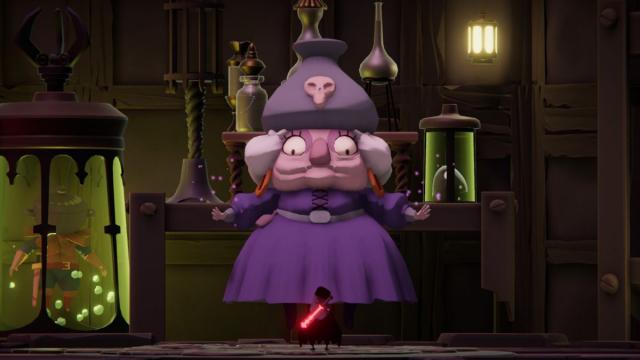 Even when talking about complaints – both big and small, I have to stress that the gameplay still kept me engaged; if it didn't have my full attention it at least maintained my curiosity.  Maybe the old-school Zelda Xerox (Zeelrox?) template is too comfortable, but it's rare to see execution to this degree.  Whether it's the panoply of potential shortcuts, exciting detours, measured combat pacing, carefully-implemented stat upgrades, some challenging puzzles, and much more, Acid Nerve habitually read my mind of what I wanted next.

That sort of psychic power extends to the world design too.  It oftentimes keeps to expected locales, but you can tangibly sense a disruption in the life/death cycle through its otherwise colorful art design.  Oddly enough, the area exasperating that disruption are the near-empty Reaping offices.  Enemies you can face is better than dour emptiness.  Where the visuals truly shine comes back to the quirky character design.  Since there's no voice acting, overly-expressive faces and humorous pantomimes take center stage.  It's amazing how much traction Acid Nerve can get from a voiceless crow simply through humorous head-jolting and flapping animations during cut scenes.

As mentioned previously, all of the technical work regarding visuals and sound design is incredibly sharp.  It's tough for me to recollect even minor bugs that distracted from the journey.  The slashing, bashing, and smacking all sounded on point.  One slight sound criticism I'll make is against the soundtrack.  It's one of those weird cases where I respect David Fenn's composition overall, but also thought it sounded too... spritely for its own good.  Some twee-heavy tracks didn't seem like the best choice for a couple of the environs. 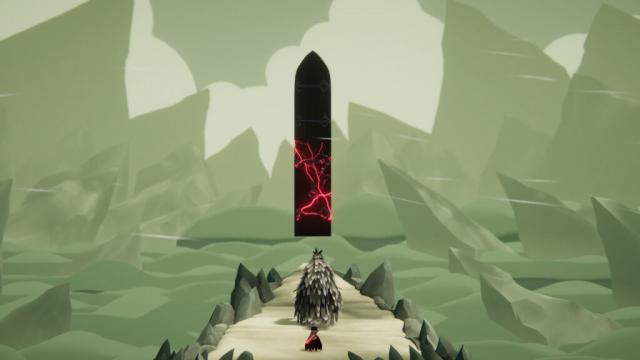 Death's Door isn't shy about flaunting its inspirations.  The soaring success over similar adventure titles stems back to its slight nuances and implementation; so confident is it in these strengths that some of the best content awaits after the credits roll.  The unabashed approach to avaricious elders staving off the natural life/death cycle is also unexpected and welcomed.  It has issues, its gameplay baseline being the most noticeable for genre veterans, but the accumulation of so many elements to crow about – characters, polish, creativity, art design, combative pacing, and so on – made it an experience I couldn't put down.  It would be caw-ful if you missed out on Acid Nerve’s latest.

This review is based on a digital copy of Death's Door for the XS, provided by the publisher.