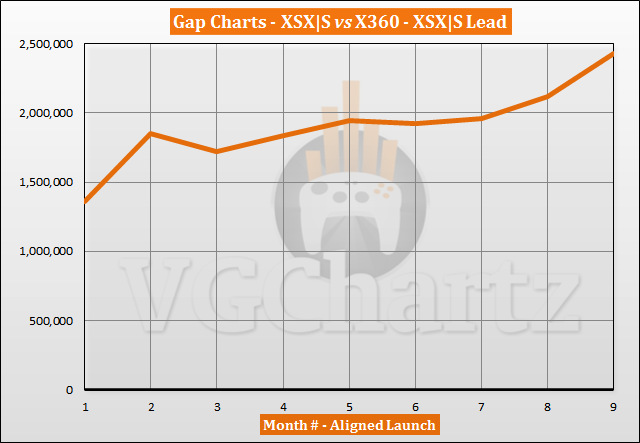 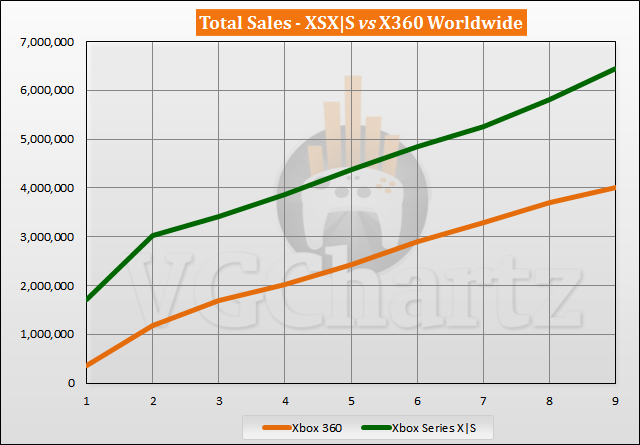 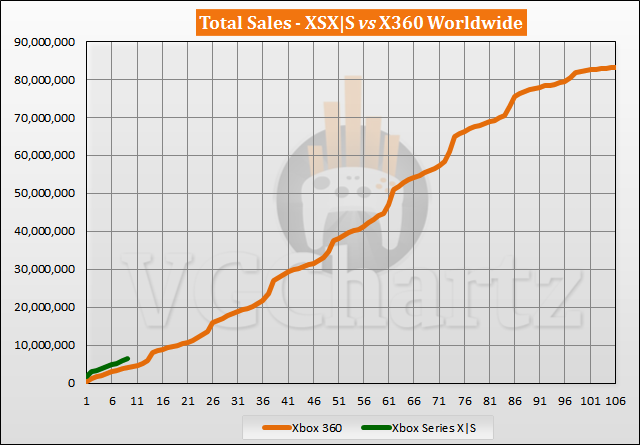 Xbox Series X|S is off to an amazing start tracking well ahead of all other Xbox consoles through nine months.

Looks like Xbox Series is going to do better than 360 for the first three years of hardware sales. Will be interesting to see if 360 starts catching up when it has its first big Christmas around month 37.

If I recall correctly the holiday for month 37 is 2007, which is when Halo 3 launched. Comparing holiday lineups the second holiday for 360 had Gears 1, while Xbox Series has Halo Infinite and Forza Horizon 5. Holiday 3 would be Starfield on Xbox Series and Halo 3 on 360.

Series X|S is off to a great start! Of course continued HW sales success will depend on software output, and with the amount of games in the pipeline they have announced already, I can see Xbox doing really well this gen.

Impressive, considering the 360 had no competition at the start. Also didn't have lack of stock, I remember I just walked into a store and bought mine.
Its good to see all 3 platform selling well, its good for us gamers because developers will get more interest in developing what we love, games.

After the extended RRoD warranties finally ran out, a lot of people just bought new 360s when their old ones died. This inflated 360 sales (when you factor that in, the PS3 won that gen a little more solidly than the numbers suggest). If the Xbox Series consoles beat the 360 despite that, I'll be impressed. And I think they might, thanks to the Series S (which has meant an early end to Xbox One sales, vs. Sony which seems intent to keep offering the PS4 as a budget option for a while longer). Instead of offering the Xbox One S as the budget option, which would inflate last-gen sales, the Series S as the budget option (but on the new architecture) instead inflates current-gen sales. Good move on Microsoft's part, and that will also help end Xbox One software support earlier (vs. Sony which may feel pressure to continue PS4 software support longer than Microsoft does).

I'd still love to see some Series X|S games that don't need the SSD come to the Xbox One X, though (but not the One S). Probably never happen, but would be cool to see.

The 360 had a very slow start. The real challenge will come starting year 5, when the 360 really picks up the pace while the XS will possibly already be past it's prime.

The last-gen was woefully underpowered (both Xbox One and PS4) at launch compared to the PCs, of that time and yet managed to last 7 years. While still lower than top-tier PCs, this gen's power level compares significantly more favourably to PCs than last-gen, so should last at least 7 years. With mid-gen refresh "Pro" systems, this gen could last 8-10 years IMO.

Not true, at least not for the PS4.

When the PS4 got announced, it was about as powerful as a Radeon HD 6950, almost their highest-end chip at the time. But by the time of release, the next GPU gen has long arrived, and the PS4 was only as powerful as a mid-range 7850 anymore.

The same happened with this gen: When the PS5/XS got announced, people couldn't believe that the consoles were close to high-end PC GPUs (namely the NVidia 2080 Super). However now, just one GPU gen later, they only compare up to a 3060Ti or 6700XT, which are very mid-range GPUs yet again. In fact, they are even more so as the 7850 was more upper mid-range while the 3060Ti and 6700XT are just one or 2 step above entry-level GPUs anymore. The only real difference is that due to the staggered launch of the GPUs, the comparable mid-range chip only released months after the consoles instead of before.

This gen will need a mid-gen upgrade for the Raytracing alone. RDNA2 was AMD's for foray into Raytracing and it's markedly weaker than NVidia's solution and as a result absolutely tanks the performance of the GPU. Once raytracing becomes really prevalent in 2-3 years they need a mid-gen upgrade to keep up on that front - and for rasterization performance too unless they want to ditch 4K as an option. Next GPU gen is expected to almost double the performance over this gen, which would make the GPUs in the current gen consoles to entry-level GPUs of next GPU gen (4060 or 4050Ti and 7600/7500XT for NVidia and AMD respectively)

I believe the PS5 10 months after launch compares more favourably to the PC experience than the PS4 did 10 months after launch. Part of that may be the diminishing returns we're seeing as technology advances, in fairness. But that doesn't counter my point, it strengthens my point that this gen may outlast the previous gen.

The only reason why the PS5 compares more favorably is because you can't get the damn GPUs right now on PC. Otherwise it's actually exactly the same.

Doesn't the CPU in the new systems compare a lot more favourably than the Jaguar did though? I thought that would make them compare better to an average PC experience than the PS4 and Xbox One did in 2014.

The CPU is much more powerful, no doubt, and also closer to what modern PCs have built in (it's basically an underclocked 3700X).

The main difference is that now 8 cores are pretty much standard while back in the day when the PS4 launched most were still on dualcores (though quadcores became more and more prevalent). So if the game was programmed with this in mind, the lower performance of each core could be counterbalanced by the fact that is had more cores.

So yes, the CPU compares more favorably, but for games that were able to use all Jaguar 8 cores, then the gap narrows down considerably. It's just that the vat majority of games back then didn't, so they needed the GPUs to help them out.

Yes, the Jaguar CPUs were a souped-up mobile design, not a desktop design like in the new consoles. But I also think the GPUs in the new consoles compare more favourably to modern PCs today than the Xbox One and PS4 GPUs compared to late-2014 PCs. It has been widely discussed how the PS4/XBO were designed to be more cost effective than normal from the get-go, as Microsoft and Sony were worried about hardcore gamers migrating to PCs while casual gamers migrated to mobile, squeezing the console market in the middle. At the time, there was a lot of talk about how the PS4/XBO might be the last-ever console generation. They were launched without a lot of confidence. In contrast, the Xbox Series and PS5 consoles are being launched on the back of an enormously successful console generation and a bright future, so were made with more competitive architectures relative to PCs. Don't take my word for it, there's a lot of chatter amongst developers in interviews saying everything I said above.

Thing is, they said the same stuff about the GPU in the PS4 back in the day (though they hated the CPU for the most part).

They are saying it because the performance is more or less on par with a 6700XT, which is plenty powerful. It's biggest weakness however is the weak Raytracing capabilities of the current AMD GPUs, which absolutely tanks their performance. With Raytracing becoming more and more prevalent and the first PC games coming out where you can't fully deactivate it anymore, this will shorten the time where the consoles will stay on top, and will need a mid-gen upgrade just like the last gen to stay afloat.

As for the CPUs, they are very powerful, but the console manufacturers are not doing themselves any favors with locking their clock speeds at relatively low speeds. XS tops out at 3.8Ghz with SMT disabled (3.6 enabled) while the PS5 reaches 3.5Ghz, which is more akin to mobile CPUs these days (desktop CPUs nowadays reach 5Ghz) and this will hamper top performance.

So in your estimation the GPUs are similarly good to the last-gen GPUs compared to contemporary PCs. But the CPUs are better overall (low clocks, but a drastically better architecture). I tend to agree, and that contributes to why consoles overall compare more favourably vs. PCs this gen. I do think the GPUs, overall, are also a little closer to PCs this gen, but it sounds like we both agree that this gen consoles overall are at least a little bit closer to contemporary PCs than they were last gen.