The end of a console’s life often brings together dedicated developers with an attachment to the platform because they want to keep supporting a piece of hardware they love. This is amplified when a machine doesn’t have a successor on the market. The Dreamcast received more than half a decade of official releases after its discontinuation in Japan, for example, and it continues to get homebrew games to this day. That's in stark comparison to the Wii U, which hasn’t seen a new game since 2020, likely due to the Switch’s strong position in the market. So it wasn’t a surprise to see Witchcrafty - from stalwart Vita supporters PigeonDev and Sometimes You - among the final batch of six official games releasing on 20th July 2021 (the Sony-enforced last date for digital Vita releases). 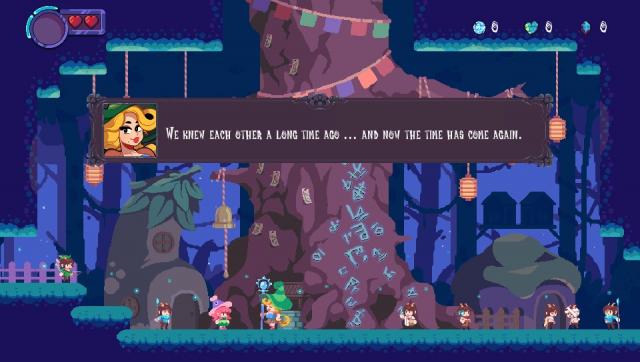 What is unusual about Witchcrafty is the way in which it's been delivered. As a result of Sony’s surprise end date for submissions, the still-unfinished title (it was due to release later in the year on Vita) has been tweaked and put out in a different format in order to make the cut-off. This is effectively an extended demo, showcasing the gameplay ideas, art, and the general gist of what I assume the final release will be like. So therefore let me stress that this is not a finished product and this shows when playing, although that makes it a fantastic time capsule to videogame development as well as the shutdown of the Vita’s store, but not necessarily a compelling game to play.

In Witchcrafty, you play as an unnamed witch who wakes from a very long nap and finds her town has been invaded by goblins. She's then tasked by the town elder with venturing into the forest and fighting the source of corruption. Along the way, she encounters talking cats, finds a flying broomstick, and reads giant books written by ‘J Vanderwalt’ that give some insight into the game's world, but the story here is very vague and left open-ended at its conclusion. This is the first example I’d point to of the game feeling unfinished, as it almost teases you to check out the final version by revealing little about what's going on. With that said, there is a nice little message at the end celebrating the Vita’s life, which I appreciated, and it put a smile on my face at the end. 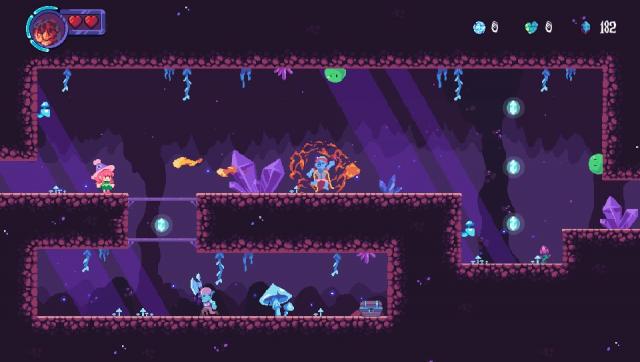 Graphically, I came away very impressed with what was on display. My initial impression was somewhat negative, as the opening splash screen looks rather rushed, the font is difficult to read, and the translation is wonky at points. However, the animation work is top notch and there are some nice little details. Finding a power up causes the witch to disappear into her hat, which then floats down to the ground, and the way she chucks lightning bolts with gusto is a nice touch. I also love the title's colour palette, which changes based on the level – the forest uses pleasing shades of purple and green, while the caves are a deeper purple, and the icy final level is a snow-covered treat. Each of the levels is filled with little objects (crystals, mushrooms, vines) that make them pop with life too. Even the soundtrack seems complete, offering an impressive selection of chiptune songs that would have fit in perfectly with the throwback era of 2D platformers that Witchcrafty emulates.

In terms of gameplay, it's traditional platforming fare through and through – you can jump, double jump, roll, and dash, and need to combine these abilities to navigate between the various obstacles in your way, like pits, moving platforms, and enemy projectiles. Enemies are dispatched by attacking with circle (you don’t take damage from touching them, which is slightly odd) and you unlock spells such as fireballs and ice bolts as you progress, although these are only used for environmental interactions and seem rather useless for helping you fight monsters. 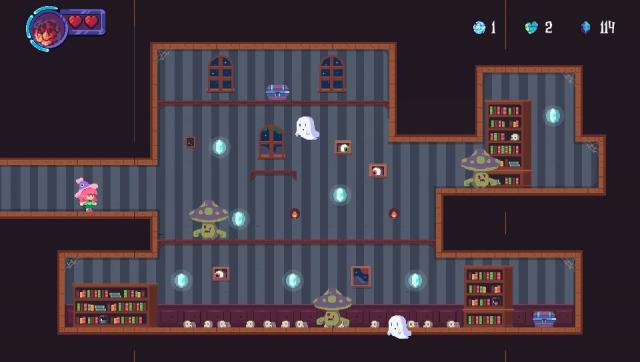 I was having a decent enough time with all these systems, but problems started appearing once I entered the second of four worlds. Glitches then become abundant in Witchcrafty for Vita. At various points I got stuck in a ledge, got stuck in a running animation and couldn't jump or attack, jumped on a platform that turned out to not exist, and got killed by an invisible bat that could attack me but which I couldn’t see (fortunately I could hit it, but this mostly came down to pot luck while swinging the witch's weapon). All of this is demonstrative of a game that wasn’t quite ready to ship and is exacerbated by the fact that save points are sparse, causing a lot of running back through areas you’ve already completed due to something that ultimately wasn’t your fault.

This leads to quite a lot of frustrated feelings and is most egregious because of the way the game handles its currencies. You can get permanent boosts to your health and magic by collecting three different fragments, but if you find one of these and then die before saving, it'll be gone from that playthrough forever and you'll have to start all over to find it again. This is a baffling oversight that served to remind me that I was basically playing the beta version of a title, although it can also be used to your advantage, because you can farm the currency used to purchase these fragments from the shop by running out and then back into a scene. 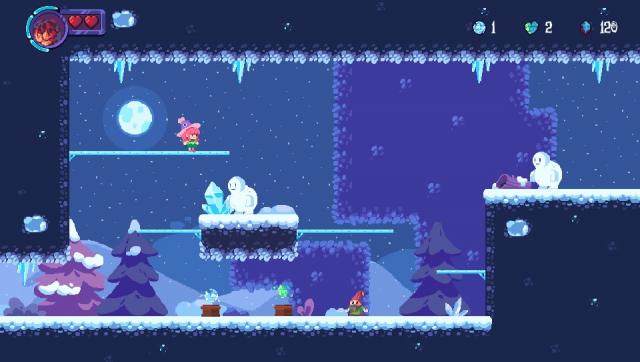 These issues, combined with long load times and a short run time (about 2 hours), make it difficult to recommend Witchcrafty. But how much I can complain about a game that shouldn’t really exist on Vita at all, and only happened thanks to a dedicated developer and publisher fighting against Sony’s rather stupid corporate decision-making (I'd point out that it’s still possible to release new official Wii games, but not Vita ones, despite the latter seeing releases in the double figures this year)? That's something I’ve struggled to reconcile for this review. Witchcrafty is rough, rushed, and unfinished... and yet there are sections where things work and it hints at an enjoyable 2D platformer.

This review is based on a digital copy of Witchcrafty for the PSV, provided by the publisher.

I think it's witchcraft that games are still being released so regularly for a system long dead. Is Vita the longest supported system after it's been discontinued?

Dreamcast has it handily beaten!

There's a company called Protovision that publishes new games for the 1982 C64. I don't think they're as big as Sony of course... Atari Age publish for the 2600 IIRC