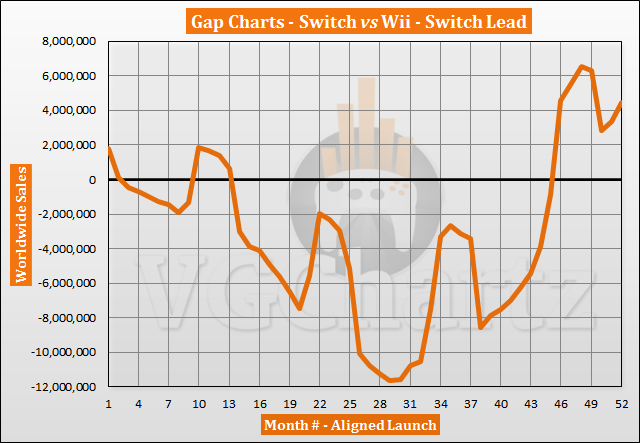 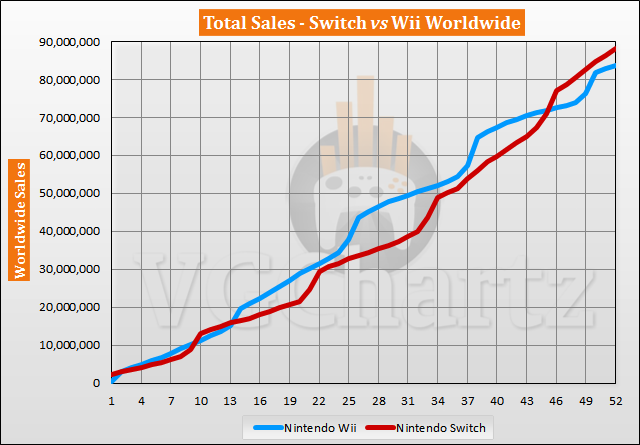 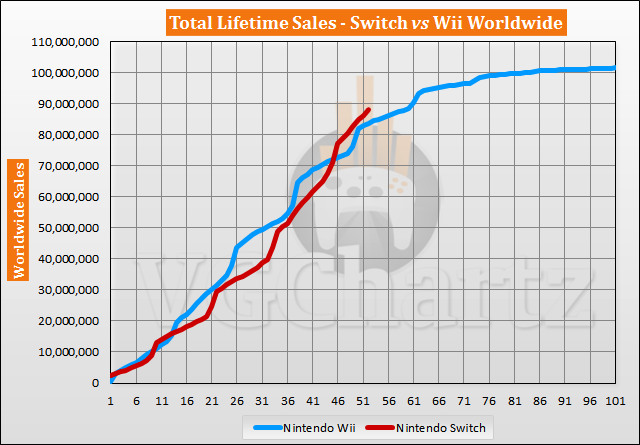 The 52nd month for the Nintendo Switch is June 2021 and for the Wii it is February 2011. The Switch has sold 88.14 million units, while the Wii sold 83.68 million units during the same timeframe. The Wii reached current Switch sales in month 60 where it sold 88.50 million units.

The Wii sold 101.63 million units worldwide during its lifetime. The Switch needs to sell another 13.49 million units to outsell the Wii.

Last year Switch couldn't even overtake Wii before the Wii holidays, now Wii can't get back in lead after it's holidays. Shows how different the lifecycle of the two consoles is.

Wii started running, Switch started jogging then took a bike... Or a Rocket!

Wii died a quick death, consuming its brand in a very short time. Switch has started with slower, but much more consistent steps.
So while the attempt to maintain the Wii brand with WiiU was a disaster, the opposite could happen with Switch. They have a hardware with a very large and varied audience, that succeeds not because of its concept, but because of its software. It is, economically, the most solid console in Nintendo's history.
I wouldn't be surprised if Switch is Nintendo's last console in terms of branding, and its successor is simply Nintendo Switch 2.

Nintendo tends to do name the console the opposite you are thinking of...

Yes, Nintendo's tendency used to be this, but in the case of Wii and DS they did try to sequence them. After all, WiiU was still Wii2, and 3DS was DS2. But these didn't become as solid brands as they thought they would. With Switch they have a new opportunity, and I don't think they'll waste it.

Well, I guess everything's better than an U after the name or a 3 before the name :D

I still see the Switch ending atleast over 120-130 millions, but recent Nintendo behaviour as me think the momentum could drop sooner. I feel like they are kinda letting the Switch flow too easily. I haven't seen as much negativity online towards the Switch and Nintendo in a long time compare to what they are facing right now with joy con drift, now greedy OLED pricing and just overall laziness. So much more could be done and if they just keep reporting stuff for the year after, people could just start losing interest instead of waiting for them to act up.

How the tables have turned.