Ten years after it launched, Skyward Sword remains one of the more polarizing Zelda adventures. It's one of the few games in the 35-year-old franchise that simply defies consensus. Some fans love it deeply for its stellar story, intricate dungeons, and tactile combat, while others hold it in contempt for its linear design, reused areas, and motion controls. While Zelda adherents will probably never find common ground, one thing should be clear to all: the HD remaster The Legend of Zelda: Skyward Sword HD is the absolute best way to experience the game.

Let's get one thing clear: Skyward Sword is no remake. At its core, this is the same adventure from 2011, for good or for ill; that said, Nintendo has done a remarkable job adding several small tweaks that add up to a rather significant overhaul. Technically, visually, and mechanically, this HD version is an experience elevated over the original. In short, this is how Skyward Sword should have been in 2011. 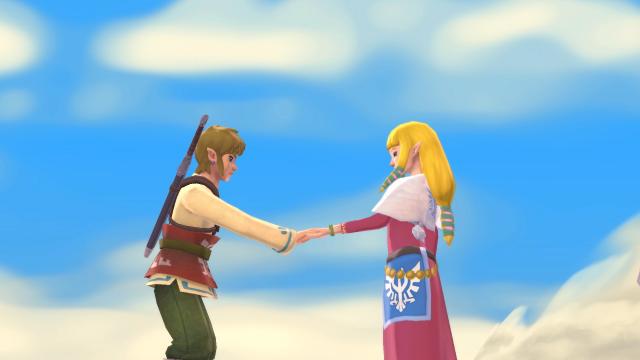 For the uninitiated, Skyward Sword is the earliest canonical entry in the Zelda series. It follows the young knight Link who, in a desperate search for his childhood friend Zelda, descends from a protected haven above the clouds to the ancient surface below.

Ten years may have passed, but time has done nothing to diminish the excellent narrative of Skyward Sword. It remains the best tale of the entire saga — a memorable, meaningful, surprising origin story worthy of the legendary franchise.

In terms of structure, Skyward Sword sticks mostly to the formula codified in A Link to the Past, although it feels more rigid and directed than most. You'll descend from Skyloft, the game's central hub, down to several earthbound regions, each with their own dungeons, items, and secrets. As Link, you'll fight monsters, topple bosses, collect money and crafting materials, and discover a host of interesting tools and relics. Often you'll revisit previously-explored areas and deploy newly-acquired gear to open new paths and obtain hidden items. 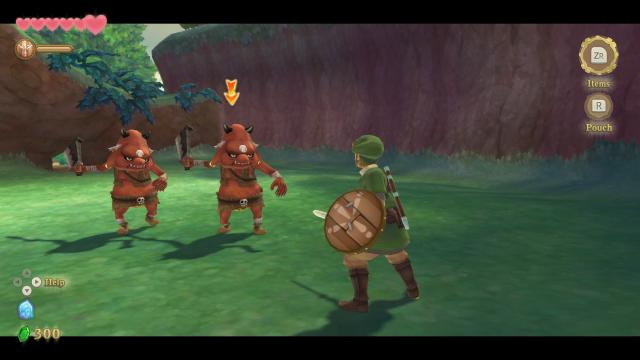 So, the story, structure, and gameplay loop remain intact a decade later. What has changed, then? Quite a bit, actually. The biggest change, and the one most likely to defuse some of the animosity directed toward Skyward Sword, involves motion control combat. The original Wii incarnation of the game was famous (infamous, in some corners) for its 1:1 motion controls, underpinned by the Wii MotionPlus controller and its gyroscopic sensors. These provided Link full control of his sword; players could direct him to slash, swing, hack, and stab from different angles by performing the same action with the Wii controller. For many, myself included, it was a revelation. For others, it was a hindrance.

In order to please both sides of the debate, and to accommodate Switch handheld players, Nintendo has provided two unique control schemes. Those who enjoy motion-controlled combat can use the two halves of the Joy-Con as sword and shield. Once calibrated, the right Joy-Con will provide 1:1 control over Link's sword and the left Joy-Con will deploy his shield. While you might find yourself re-centering the gyro controls more often than you'd like, this is hands down the most satisfying way to experience the game. The Joy-Cons appear to be more reliable than MotionPlus, and they grant a tactile intensity to every enemy encounter. Moreover, by opting for gyro controls, players will free up the right analog stick for full 360 degree camera control, a feature unique to this HD version.

The camera is a big deal. It makes the game feel more modern and controllable. If you return to the Wii original, as I did while I campaigned throughout the HD version, you might find your right thumb moving instinctively for a second analog stick that isn't there. 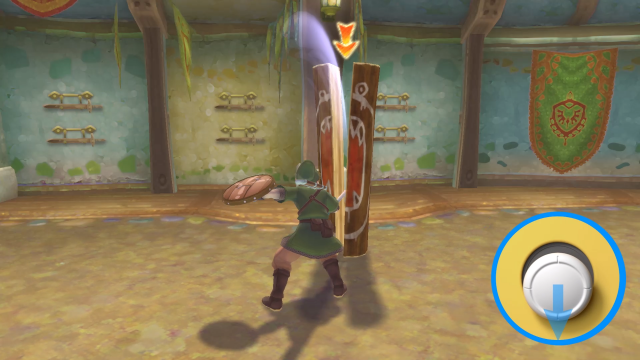 If motion controls just aren't your thing, or if you're restricted to a Switch Lite, worry not. You can perform upward, downward, sideways, and diagonal strikes with the right stick. Just flick the stick in the desired direction. You'll miss out on haptic joy of swinging a virtual sword, but you'll get along just fine. If you opt for this control scheme, you'll need to be a little flexible with camera controls. Since the right stick performs sword strikes, you must depress the L button before manipulating the right stick to control your camera. It's not a huge burden, just another reason why gyro controls are the better option.

Apart from more accurate motion controls, a new motion-less scheme, and full camera control, Skyward Sword HD introduces several other quality-of-life fixes. Nintendo has introduced a new autosave feature, the ability to record your progress to multiple save slots, and the option to speed up text and skip cut-scenes. The company has also discarded repetitive item descriptions and toned down Link's sidekick Fi considerably. In the Wii version, Fi had an annoying habit of popping up during the adventure to restate the obvious. Now she provides far less unsolicited advice, although players can still summon her by pressing down on the d-pad if they need to size up an enemy or get a hint. 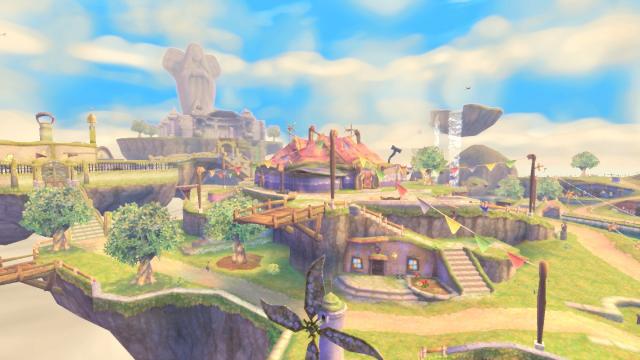 In addition to these quality-of-life tweaks, Skyward Sword HD enjoys a robust technical upgrade over the original. The game now runs at a buttery 60FPS, which make the action smoother and cleaner, and boasts a lovely HD facelift. Now, if ever an SD game could outshine its HD counterpart, it's Skyward Sword — the game's painterly aesthetic actually worked wonders in 2011, producing something akin to a living impressionist painting. Yet after toggling back and forth between Switch and Wii versions it's clear the new graphics are superior. This is a beautiful game, with rich, vibrant colors and far less aliasing. Indeed, it's hard to take your eyes off of it.

In spite of this HD remaster, Skyward Sword will probably continue to divide the Zelda fanbase. Some of its more controversial elements remain, despite the technical, graphical, and mechanical overhaul. Yet the new features — optional motion controls, full camera control, auto-save, a less intrusive companion, a smoother frame-rate, and modernized graphics, among others — will surely be welcomed by parties on both sides. Those who frown on the game should dislike it less, and those who champion it should love it more.

This review is based on a retail copy of The Legend of Zelda: Skyward Sword HD for the NS

This mirrors a lot of what I said about SS. The Wii version often got in its own way. This version is much more playable, and you can see the good points SS had more clearly.

It's a good game, maybe a little too linear. QoL improvements were much needed and improved the experience. But for me playing it now reinforces the understanding that this is a formula that needs to stay in the past and the future of the series is the established model in BotW. It might appear in remakes or remasters, or games on a smaller scale, but major releases shouldn't revert back to that model. Reinforcing, my opinion only.

Why not both? Why do we have to commit to only one style? Why can't there be freedom/exploration-based open worlds and linear games? Both have their merits, both have their drawbacks. Both have a place in Zelda, if both are done well. Why limit yourself?

Maybe we can have both, but would it make sense for Nintendo to go back to the old formula on major releases? I mean, the sales of Breath of the Wild took the franchise to another level in commercial terms. Also, I think the old formula is kind of exhausted and SS was already showing signs of that.

It'd been even better if it was less linear, but it's nice that Fi now has a mute button. :)

One of my least favorite Zelda games. Skipping the hd port. I'd probably still recommend it to anyone who hasn't already played it.