In spite of each major Tekken arcade release utilizing ALL.Net since Tekken 5,  Virtua Fighter itself has lost traction amongst the fighting game community, not least because SEGA has been content to just provide updates to Virtua Fighter 5 - a game that released in 2007.  Meanwhile, the Tekken and Dead or Alive series have both had multiple spin-offs and sequels released since then.  So in what is perhaps SEGA's final attempt to appeal to the masses with Virtua Fighter 5 here is yet another update to that game, named Virtua Fighter: e-Sports in Japan and Virtua Fighter 5: Ultimate Showdown in the rest of the world. 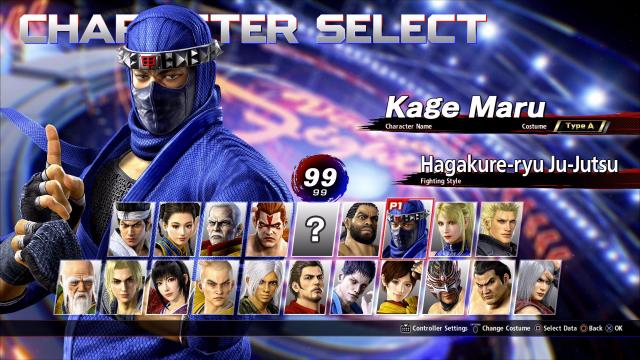 The gameplay for this new version of Virtua Fighter 5 appears to be identical to the previous one (Virtua Fighter 5: Final Showdown).  Absolutely no balance changes of any kind have been made, with the only noteworthy difference being that the final boss, Dural, isn't unlockable in Ultimate Showdown.

Ultimate Showdown does at least do a great job of upgrading the look and presentation of Virtua Fighter 5 so that it's more in-line with modern day fighters.  The menus have all been updated, with a new red and blue theme that could only be made by the most compassionate of visual artists.  The cast of characters also steps closer to realism with the help of SEGA's Dragon Engine, with better skin textures, facial modeling, and lighting.  However, some of the faces may take some getting used to - Akira's new face seems to have taken 15 years away from his appearance, while other characters, like Vanessa and Eileen, have more realistic facial structures.

Overall, it's a definite improvement, but not by any means perfect.  Sarah's face seems odd, even when comparing her to her Dead or Alive 5 guest appearance.  Wolf doesn't appear to be missing teeth but does have a strange light source coming from his mouth, allowing you to clearly see into it. And El-Blaze's mask and costume don't reflect the environment as they once did in older versions of Virtua Fighter 5. 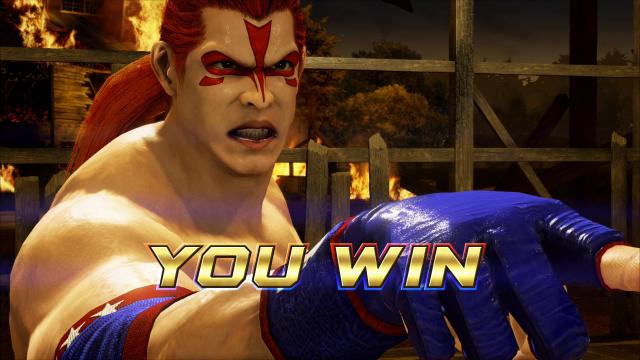 Similar to the updated character models, the stages look better overall, despite lacking some minor details upon closer inspection.  The stones and brick structures protruding from the water in Shun's stage, for example, have no reflections.  Outside of that, stages boast remodeled/redesigned interiors and exteriors, with the most drastic change being to Dural's stage, which takes place in an entirely different location while maintaining the same dimensions as her previous one in Final Showdown.  All of these updates to the game's environments help to bring the visuals up to the standards of eighth generation consoles, in spite of minor details being missing.

Ultimate Showdown tops off the visual update by adding much-needed hit sparks. In addition to assisting players by relaying information more clearly than a quick flash of light (used in previous versions of Virtua Fighter), the hit sparks also help to make the game more visually entertaining for spectators - something Virtua Fighter has struggled to do for a while.

It would be nice to also see an on-screen combo counter to add even more visual flair, and also help casual players and spectators follow along with what's happening in the match. However, just as with the entire Dead or Alive series and, more recently, Tekken 7, all hits from a single combo will persist as red health, with that section fading away from the health bar after the opponent has been freed from hit-stun.  Even without that, Virtua Fighter 5: Ultimate Showdown still does well for its spectator audience.  Just from the main menu, players can spectate recently played ranked matches, most of which showcase high-level ranked matches that to a good job of showing new players how Virtua Fighter should be played, while at the same time expelling myths like "it has slow gameplay" or "it has no combos". 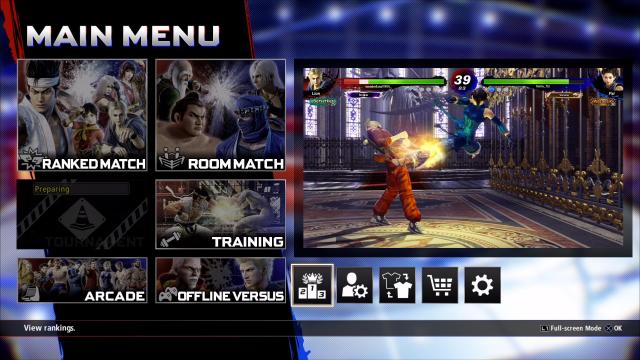 Being able to spectate matches from the main menu is a fantastic idea that opens up the community aspect of the game.  This is further complemented by the ability to see all the lobbies from the online menu screens.  Even if all you see is a long list of filled rooms with no open slots, it feels better to know that people are playing the game and you'll no doubt get a match within a reasonable time frame, rather than having all filled rooms hidden, leaving you with the feeling that no one is playing Virtua Fighter 5, which couldn't be further from the truth.

With that being said, the online features themselves are a bit of a mixed bag.  For starters, the netcode is delay-based, not the new standard of rollback.  Despite this, most matches will play out well enough, though admittedly there are times when you'll experience occasional lag, depending on how far away you are from your opponent.

However, the most annoying part of playing online actually has nothing to do with the lag.  It's a feature, which was obviously taken from Street Fighter V, that uses tabs and menus to select characters.  This was no doubt done to save time and to quickly get players into a match, but the problem is that in order to change characters you have to open a menu and navigate to the change character option before being able to select a new character, all while the clock is ticking to hand your turn to the next player in the lobby.  How much time do you have to change your character and press the ready button?  Just ten seconds. 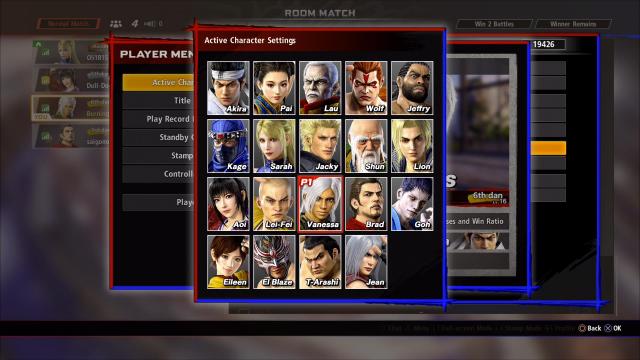 Sadly, the online frustrations don't end there.  In an attempt to make the game more engaging to spectators in the lobby, they're given the option to use on-screen cheers. Be warned that this option absolutely should be disabled for online play, as many of these cheers have sound effects that you'll hear in normal play, from characters shouting to collision effects.  Needless to say, it's extremely annoying to hear what sounds like your attack making contact, only to realize you're being trolled by a spectator.  To make matters worse, there's no cooldown period or an indicator of who's using them if you're playing a match (or even when spectating in full screen).  Unless you're the host and spectating the game in a small window, you also don't know who to kick if someone decides to play Through the Fire and Flames through their controller.

Other than that, the online casual modes are pretty basic, merely allowing you to set how many rounds are required to win a match, and how many matches are required to win before the next person in the lobby is given a turn.  Personally, two rounds and two matches have felt better than the standard single match of three rounds, but for some this may be too long of a battle.  The tournament feature has yet to become available.  Ranked matches function similarly to how they did in Tekken 7 at launch, where you may play against the same opponent up to two times.  Each character has their own rank, and as you progress through the ladder other characters will begin leveling up, since it's assumed that if your main character is level 30 then you should have enough general knowledge to use anyone at level 10, for example.

Offline modes for the game consist solely of arcade mode - which shouldn't need an explanation - and several training modes to help you learn the basics.  The tutorial itself is basic, but may perhaps be useful for those entirely new to fighting games.  The Free Training mode is the best tool available for practice, as it allows you to adjust the positioning of the characters and record inputs for the dummy character, allowing you to easily practice against a particular strategy that you may be struggling against. 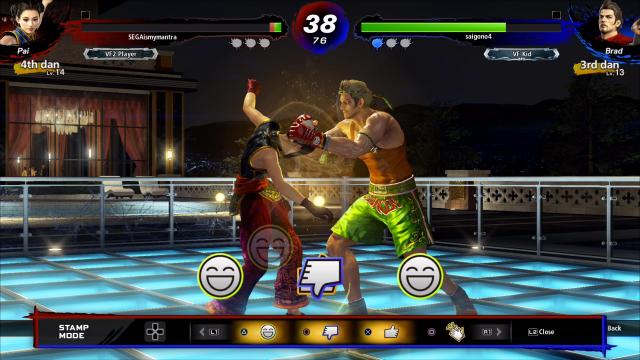 One final noteworthy feature is character customization.  It exists, but sadly that's about all that can be said for it.  Most of the options are little more than simple re-color presets or extremely minor changes, such as removing a headband.  Almost all of the extra outfits and items available in Final Showdown have been removed, but may return in a future update or DLC.

On the audio front, all of the game's characters use the same voice samples that were recorded for Virtua Fighter 3, or whichever game they originated in, with the exception of Vanessa and Taka Arashi, who both received new voice lines (and not for the better in Vanessa's case, as it's painfully obvious that she has two voice actresses that sound nothing alike).  While it's very common for Tekken to use multiple voice actors for the same character, at least it's not so obvious in that series.  Fortunately, all of the new music tracks for the game sound great.  If want to, you can select music from older games in the series too.  However, the sound effects and voices admittedly do take away from the overall experience, which is a shame. 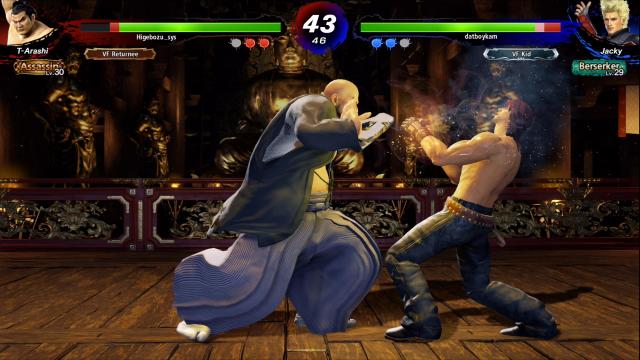 Taking into account everything that would need to be done for a sequel, it becomes understandable why SEGA decided to take the safe route of re-releasing another version of Virtua Fighter 5, rather than launching a brand new entry.  There's no way SEGA should even consider using voice recordings from 1996, for example, or releasing a new game so lacking in modes and story, not to mention new characters and so much more.  As an update Ultimate Showdown works very well, and may perhaps even be the most successful home release of a Virtua Fighter game, which will no doubt thanks to it being available to PlayStation Plus members until August 2nd.  Even with the few imperfections it has, Virtua Fighter 5: Ultimate Showdown is still very much an enjoyable fighting title.

This review is based on a digital copy of Virtua Fighter 5: Ultimate Showdown for the PS4 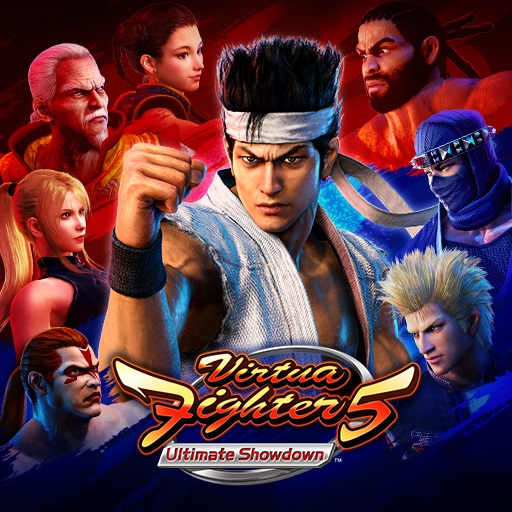