No, not those kinds of twists. An outer space twin-stick shooter, the game features a fascinating collection of twisted, inverted landscapes where ships and bullets hug the terrain — upside, downside, inside, and outside. It's a novel and visually-arresting concept, even as it creates visibility and pacing issues. So, is Curved Space more The Sixth Sense (a drum-tight, show-stopping thriller), or closer to The Happening (a meandering jumble of half-finished ideas)? The answer lies somewhere in the middle.

Surprisingly, considering it's an arcade-inspired twin-stick shooter, Curved Space includes an intriguing sci-fi storyline. The game takes place in a future where humans began to harvest energy from outer space installations. When the spikes in energy attracted monstrous arachnids, humanity decided instead to harvest the spiders. You'll control one of the jockeys responsible for this harvesting effort as she pilots her nimble craft across several different settings: asteroids, space stations, rail gun platforms, etc. 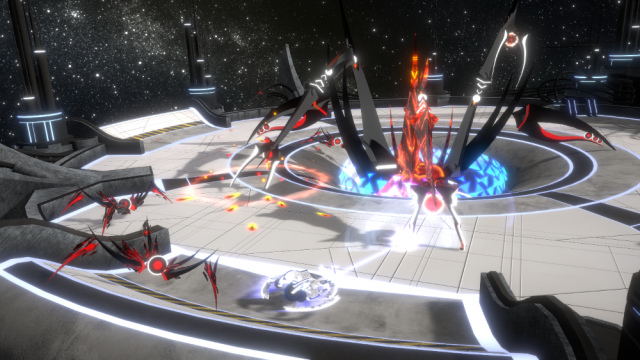 What makes the premise especially interesting is its focus on parallel dimensions. Early in the campaign, the main character connects with two extra-dimensional versions of herself, and must decide whether to help or hinder them. Depending on your choices, the game will split into branching paths that lead to different endings, granting the campaign a good amount of replay value. Moreover, at the conclusion of each stage, players can select one of several possible upgrades that carry through the campaign — bestowing upon Curved Space an extra layer of rogue-like replayability.

The campaign is arguably the best part of Curved Space, in part because of its replay value and reactive story, but also in part because of the way it gently introduces all the mechanics of the game. You'll learn the basic twin-stick controls — left stick to move and right stick to aim in 360 degrees — plus how to switch between the two primary weapons; how to activate overdrive, an energy-consuming state that lowers pilot mobility but greatly enhances firepower; and, coolest of all, how to perform lash-and-dash, a maneuver where the player ship latches on to a spider with an energy whip and then bashes into it. It never gets old.

Players will also become familiar with a diverse range of entertaining weapon types. The game features reliable standards like a shotgun and sniper rifle, plus some oddities like a scythe and a weed whacker. 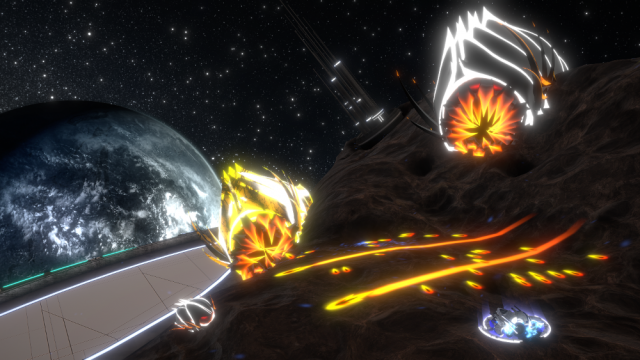 While the moment-to-moment action in Curved Space action is dependable, thanks to its engaging mechanics and weapon diversity, the missions and objectives that surround it can turn monotonous and repetitive. Apart from boss battles, which add considerable spice to the proceedings, most of the levels feature the same seek-and-destroy or survival goals. It all gets very samey after a while.

Level design exacerbates this problem. While the twisting, curving stages in Curved Space are wonderful to behold, they don't add much to the equation; in fact, often they detract from the action. These warped levels, which operate with the same gravitational energy of the spherical planetoids of Super Mario Galaxy, make navigation trickier than necessary and obscure many enemies and points of interest. Toward the end of each stage, you'll often find yourself tediously searching for the last energy node or spider. Again, these levels are visually interesting — the inverted cones, donut-like tori, and Möbius strips make the game stand out on an aesthetic level — but they can be disorienting and intrusive. 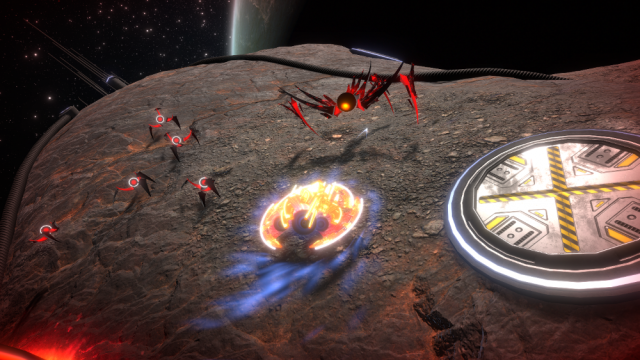 They can also cause a bit of queasiness for those susceptible to motion sickness. Fortunately, developer Only By Midnight has gone above and beyond with a host of configurable comfort options: field of view, camera distance, camera smoothing, acceleration roll, and more.

Apart from the campaign and comfort settings, Curved Space includes several game modes that add significant longevity to the main game, which lasts for only a few hours. These include a survival mode, with levels unlocked in the campaign; an endless mode, with several extra-challenging modifiers like no health drops and no continues; a daily randomized run; and, perhaps best of all, the Arena, which includes 12 missions with specific rules, e.g. sniper weapon only. Furthermore, all of the above feed into online leaderboards. 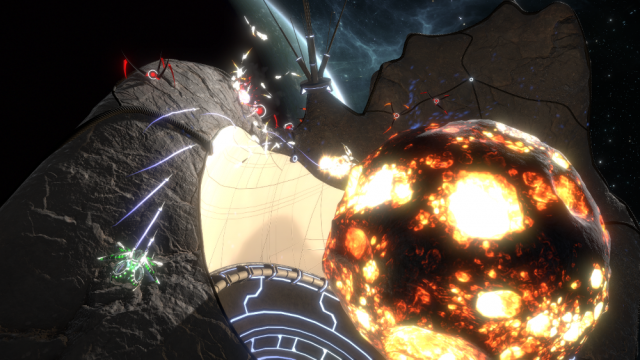 Aside from high replay value, Curved Space boasts some genuinely great music. Only By Midnight partnered with indie record label FiXT Neon to create an outstanding synthwave soundtrack featuring artists Scandroid, 3Force, and Fury Weekend. There's even a separate music player in the main menu if you want to rock out away from the action.

Spoiler alert: Curved Space was decent the whole time. While it's not a game-of-the year contender, neither is it a dud. Indeed, it falls right in the meaty part of the curve. It nails the basics, offers a lot of value, and features a rocking soundtrack. Unfortunately, at the same time, it suffers from repetitive mission design and awkward level design. As a result, it will speak loudest to the twin-stick junkies and high-score chasers among us.

This review is based on a digital copy of Curved Space for the PS4, provided by the publisher.

I quite liked The Happening. Then again, I also liked Signs and loved The Village (more than Sixth Sense), and most people seemed to hate those.