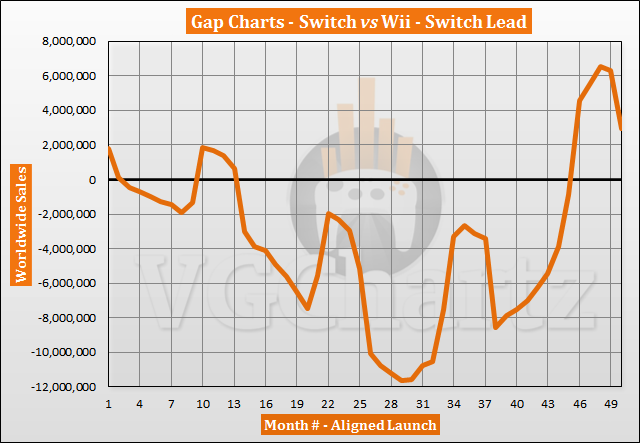 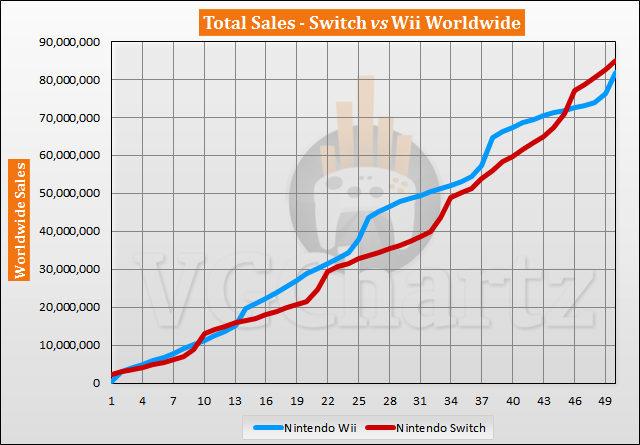 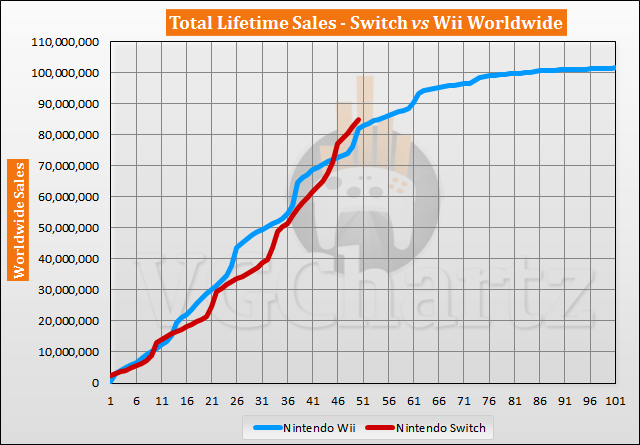 The 50th month for the Nintendo Switch is April 2021 and for the Wii it is December 2010. The Switch has sold 84.88 million units, while the Wii sold 81.91 million units during the same timeframe. The Wii reached current Switch sales in month 55 where it sold 85.46 million units.

The Wii sold 101.63 million units worldwide during its lifetime. The Switch needs to sell another 16.75 million units to outsell the Wii.

Wow, looks like this is practically over! If Nintendo hits their forecast for this FY, Switch will surpass the Wii before the Switch's 5th birthday!

Switch is a sales beast. At this point I think the DS is only platform it is still tracking behind.

And with how things are going, that might finally change too. They keep reiterating that the switch is only at the halfway point. So if 2025 is the year of the successor, who knows which one will be the top dog?

Maybe the original Game Boy? Though that was a console with a very long lifespan, I imagine the Switch's selling considerably faster.

Exactly! And if Nintendo can hold off on releasing a Switch successor until Holiday 2025, the Switch could surpass the DS (and PS2) lifetime sales.

8.5 years is a long time between generations. I believe a case for Holiday 2024 can be made, though in reality I believe the Switch will be replaced 6 months to a years before that due to Nintendo's longest lifespan for a system being the famicom in Japan being just under 7.5 years. Granted I didn't look at handhelds, but ignoring the Gameboy, the DS and 3DS's lifespans were around 6 years each.

They said several times that they want the life span to be longer. Because past consoles had shorter lifes doesn't mean the Switch will have that too. It's peaking very late after all.

Though I do think Holiday 2024 is a distinct possibility (ultimately, I would say that Holiday 2024, March 2025 and Holiday 2025 are the most likely times for a Switch successor launch), I wouldn't judge the Switch's lifespan on past Nintendo systems. Most Nintendo systems don't peak as late as the Switch has. That being said, Holiday 2024 could be possible, considering how it is hard to imagine what kind of big games Nintendo could put out for Switch by then. Meanwhile, they could have a new MK on the Switch successor at launch and possibly 2D Mario and Animal Crossing in 2025. Don't think 3D Mario or an open world Zelda would release on the next system before 2026, which is why I'd prefer a Holiday 2025 launch.

there is the trick... with Switch the chart considers the "home console" and the portable, but also just removing Lite, which is a systematic error in this comparison, Wii leads...

This chart is Switch+Lite VS Wii, Switch is far from Wii.

Fr now, what is this idea of yours, we need to split all consoles into the various models? Also the Switch is hybrid, not home console. The Switch lite is a different model of the same console, just like DS and DSi, PS4 and PS4 Pro, Xbox One and Xbox One X, Xbox Series X and Xbox Series S. It plays the same games, has the same button layout, controller, UI, eshop, general infrastructure. The only difference, the only one, is that the Switch Lite can not be connected to a TV. You can even play it in table top mode with a pro controller or additional joy cons.
You're just talking nonsense thinking two models are two completely different consoles.

These examples are the version of the same console, I would like to divide between the Nintendo case and the others, because from the DS Nintendo developed hardware with iconic features
A Playstation or Xbox are traditional consoles, in short it is the trademark that identifies the console, and this is also why ps4-pro is a ps4.
Nintendo consoles without their features are not the same console, unless this feature fails like 3D, but the "switch function" is not a failure, Nintendo strongly wanted to differentiate the consoles.

In this comparison Lite should be removed and the comparison makes much more sense.

So Switch lead survived the holidays for Wii, and the last big one at that. With the current momentum the Switch soon (this year) will surpass the lifetime. PS4 lifetime is the next big goal, that is possible next year.

Nintendo may have outdone themselves here. :)