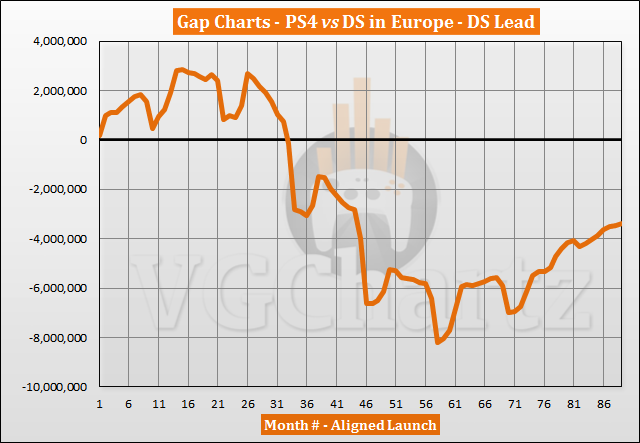 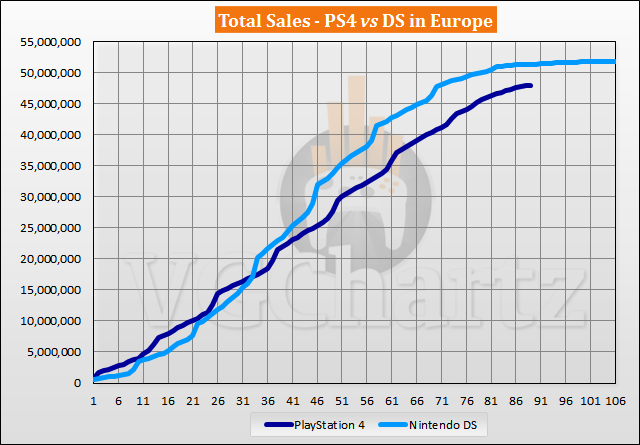 So close, but it seems the PS4's going to run out of steam just before catching the DS.

Sony killed and buried the PS4

Got pretty close, but while DS has nothing to offer anymore, PS4 momentum is also pretty dead by now. The gap may shrink a little, but DS will probably stay in the lead barring any surprising developments.

The glorious old champion ;") ... This rest entirely on Sony's shoulders. If PS4 is given the lifespan of PS1 and PS2 of 11 or 12 years then there's a 50/50 chance the PS4 pulls off this upset. Earliest I see Sony discontinuing the PS4 worldwide is 2023 ... 2024 if Mr. Jim Ryan wants to be petty. Each chart of PS4 vs DS Europe, PS4 has been closing the gap not significantly but it's shrinking. This will be a photo shoot finish if Sony keeps PS4 alive for another 2 or 3 years. Keep these coming VGChartz :D!

Man I hate how grandiose you describe the playstations.

Aight cool, I should care why? Frankly I hate the amount of humbugs on this website. Granted everyone is entitled to their own opinions and perspectives while abiding to VGChartz site rules and respecting the platform. I don't have to attack others just because their opinions don't fit my own but do you I guess? Now ... I will say this, if you don't like what I write about Sony, I suggest you consider becoming a VGC Supporter and support the staff/site directly. For as little as $2.50 a month you get an exclusive perk to ignore users. But if you can't do the suggested aforementioned above you can kick rocks I suppose. I don't have to cater how I write about Sony to you nor anyone else. That's just my two cents.

I didn't attack your opinion, I attacked your diction. When writing about really any PlayStation console you come off as pretentious and arrogant. Your bringing up of a me becoming a supporter is an interesting way to show off your supporter-ship, as an attempt to try to state your superiority on this site just because you gave money and I didn't. So maybe your just pompous in general, but hey that's just my two cents.

Sony had killed the PS4, they want everyone to go for the PS5 ASAP. Jim Ryan even said they wanted the fastest transition ever. That's why no 199 PS4 price cut, no 199 PSVR price cut...

Sony has killed the PS4? Can you link me an article to where the PS4 has been discontinued worldwide If you? PS4 has been discontinued in Japan for all but one model. Naturally with any new generation Microsoft, Nintendo and Sony would want players from their old consoles to move on the next one. Mr. Jim Ryan has stated he wants a smooth transition to PS5 BUT he has gone on record to state PS4 will be important to Sony for another 3 to 4 years. Here's a link to article hopefully VGChartz posts it lol: https://www.gamesradar.com/jim-ryan-says-the-ps4-will-remain-important-for-three-or-four-years/ -- Also Sony is in support of cross gen releases for PS4 which I personally don't like ... The whole we believe in generations spill from Mr. Jim Ryan a link to that as well: https://www.playstationlifestyle.net/2020/12/04/jim-ryan-ps4-ps5-cross-gen-games-right-rational-thing-to-do/#:~:text=PlayStation%20CEO%20Jim%20Ryan%2C%20however,million%20PS4%20owners%20out%20there. -- VR for all intents and purposes is still a niche market. Former Sony chief Andrew House was surprised to see PS VR do so well as that made Sony uncomfortable being the market leader. If Sony isn't willing to take a price cut loss on PS VR and PS4 in Europe while the console is still selling healthy I see no issue with that. Also Sony CFO Hiroki Totoki stated they expect PS5 shortages to continue into 2022 so going to be a difficult task for Sony getting all the PS4 players to migrate to PS5 when the PS5 is difficult to buy. Now I still think PS4 will get discontinued 2023 but I can see 2024 if Sony decides to keep markets of PS4 outside of Japan open for that long. Now I want to see the PS4 beat the DS in Europe just to see the circle jerk fest of excuses. That will be amusing to see lol

PS4 isn't even a shadow for the mighty DS.

Well if the pandemic never happened and Sony was able to keep producing PS4s, the system would beat the DS. However, the reality is, we are dealing with a pandemic and Sony would rather push the new system rather than trying to keep the previous generation fully stocked.