Say No! More is a tough game to classify. It's not exactly action or adventure, and even though it shares some qualities with rhythm and simulation games, it doesn't fall neatly into those buckets either. Publisher Thunderful and developer Studio Fizbin fancy it an NPG — a NO!-Playing Game — and that seems as good a genre as any. No matter its classification, Say No! More is an original, thoughtful take on the power of the word "no" in the workplace and beyond. It's funny, insightful, and inspirational. At the same time, however, it's a very short experience with rather shallow gameplay. 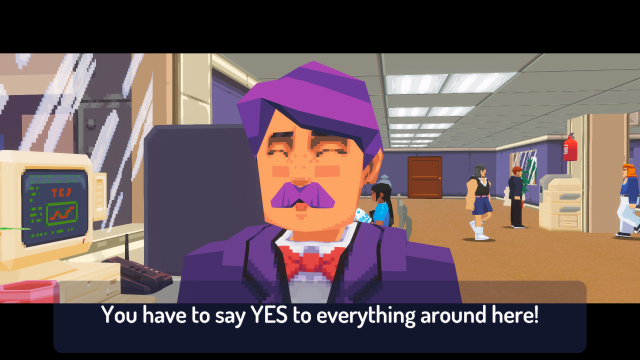 In Say No! More, you'll assume the role of a young person starting an internship at a big company. On your first day, as you sit in the improvised "office" set up behind the vending machine, your supervisor comes round and demands your lunchbox — having forgotten his own. Unable to disagree, you watch as he takes off with your food. Suddenly, a portable cassette player falls out of the ventilation. Recorded on the tape is the voice of a man — half Hulk Hogan, half Tony Robbins — who teaches you that most forbidden of words, "no". Soon you're shouting "no!" at all the absurd requests that come your way, all the way to the top of the company.

The story side of Say No! More is pretty great. First of all, it's very funny. The characters are goofy, the scenarios are preposterous in the best way, and the dialogue — particularly the juxtaposition of the request and the post-no! reaction — is consistently hilarious. Second of all, it's insightful about the power of the word "no". Sure, this is a comedy game in the end, but it shares a powerful message about setting boundaries, standing up for yourself, and declining unreasonable requests.

Last of all, Say No! More is unexpectedly inspirational. This is especially true of the chapter "No-ing Me, No-ing You", when the heroic intern goes for lunch with co-workers. In this chapter, the intern won't say "no" to demands about coffee and printer jams, but rather use "no" to steer colleagues away from the self-doubt that prevents them from realizing their full potential. It's a beautiful thing. 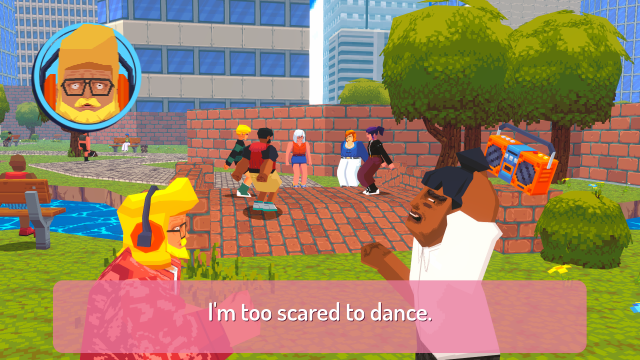 While the storytelling in Say No! More is great, its gameplay systems are unfortunately lacking. There's just not enough going on. You'll march through a set of levels, on rails, shouting "no!" to the ridiculous demands of your co-workers and supervisors. In theory, you could use a single button to complete the game. Now, to be fair, there are some wrinkles. You can choose how to say "no", by using the d-pad to select from four different variations: heated no, cold no, lazy no, wacky no. These are fun alternatives with silly animations, but they don't appear to have any tactical value. A charged "no", conversely, is quite useful, especially for taking done some of the tougher bodyguard types. Finally, there are other pre-no actions you can take, like laughing or clapping sarcastically.

It's still very straightforward, though. The game really craves more tactical, challenging scenarios. It could also use additional diversions and alternative paths. That's not to say there are no secrets. If you refuse to say "no" to some special characters, they might lead you to a demo of their video game, Fight My Mons (a play on Pokémon), or invite you to a clandestine meeting. Say No! More needs more of this kind of stuff, though — if only for replay value. 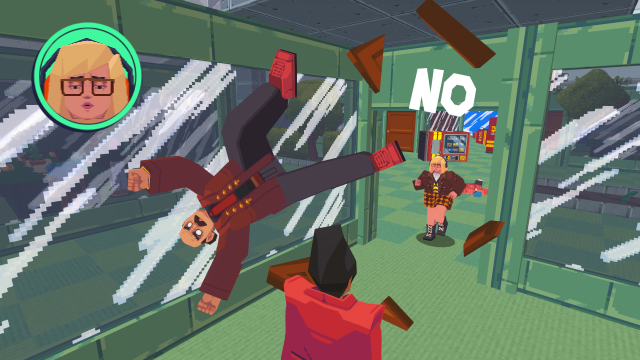 Replay value is so important because Say No! More is a very short title. Coming in under two hours, you'll probably beat the game in a single sitting. You could replay individual chapters, or restart the game with a new custom character who says "no" in a different language, but in general once you've seen the end credits roll there isn't much left to do.

Visually, Say No! More is a lot of fun. The chunky graphics look like something out of the "Money for Nothing" music video and the characters' facial expressions and animations are priceless. There's a wacky WarioWare energy to the whole thing. The music is also enjoyable; the funky, bouncy main theme goes a long way. Best of all, though, is the game's ensemble of voice actors. Jeff Burrell as Coach and Sandra Bourdonnec as President are especially good. 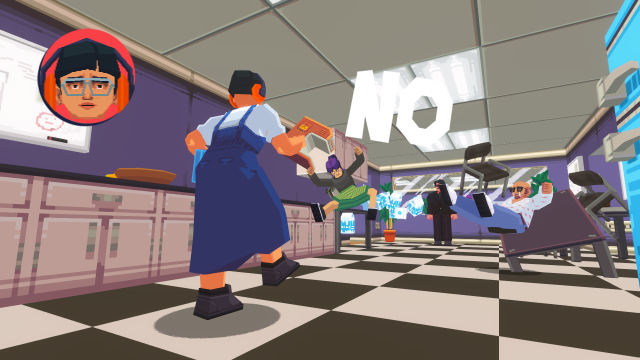 Say No! More is one of a kind. It's imaginative, inspiring, and very, very funny. It's thoughtful about ways to set up boundaries in our professional and personal lives, and how to deploy a negative word, "no", in positive ways. Yet, it's also a short, mechanically shallow experience. How you prioritize story versus gameplay will ultimately determine whether the game, and its asking price, is right for you.

This review is based on a digital copy of Say No! More for the NS, provided by the publisher.