If nothing else, Polish developer Bloober Team deserves applause for its excitement of next-gen consoles.  Whereas others are jogging or biding their time, this team sprints out of the gate with an inspired remaster and a new IP within the first three months of this new console cycle.  Considering the previous lukewarm reception from me, one could - reasonably - interpret this speed as a cautionary tale.  It actually turns out to be the opposite.  Instead of laboring over another Layers of Fear, The Medium feels like an intrepid developer toying with new technology that presents a more meaningful story and horror game.

The setting is post-USSR Poland.  Marianne, a gifted medium who ferries lost souls to their final rest within the otherworldly spiritual plane, is mourning the loss of her foster father.  This is cut short when a mysterious stranger named Thomas calls her and promises answers to long-held questions about her supernatural aptitudes.  She's beckoned to meet in-person at the decrepit Niwa Workers' Resort, site of a terrible tragedy whose scars permeate every square foot. 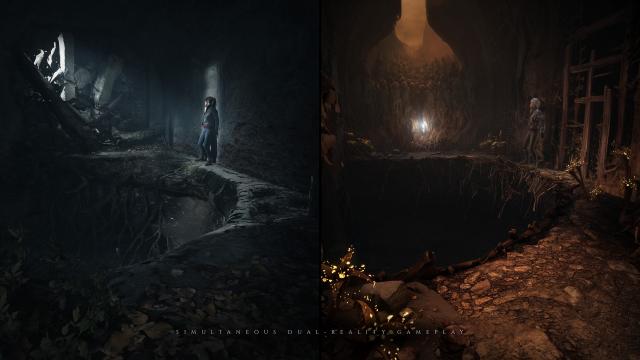 The first thing you're greeted with is a Marianne, cigarette in hand, recounting these events to descriptive detail.  The story's structure is similar to Peter Stormare's psychiatrist character in Until Dawn: someone off-camera is effectively a stand-in for Marianne explaining these events.  If you have a distaste for this storytelling approach that may sour the whole game to a certain extent.  Initially, I was caught off-guard by the inflated exposition; nearing the conclusion, I appreciated why this route was taken.  It's not quite as effective as Stormare chewing up his scenes, but that couldn't be topped anyways.  Despite occasional over-writing in cut scenes & gameplay, this overarching structure sets a specific rhythm that would've made for a lesser story without it.

My annoyance for the exposition-dumping is due to how effective other aspects feel by comparison.  It does a great job of leaving breadcrumbs for each successive event.  Whether scouring more details about the Niwa Resort or considering the duality of the two worlds, Bloober's writers were considerate in planning scenarios and naturally incorporating them in gameplay.  The narrative beats hit so effectively because of how carefully the "rules" of the Spirit World have been established beforehand without a mentor medium delivering encyclopedic information.

Bloober mostly succeeded in its character writing and thematic material as well.  From innocent to emotionally damaged, the panoply of characters viewed in gameplay or in "echoes" found in the Spirit World carry fascinating emotional baggage.  Despite heavy topics permeating throughout the narrative (some better left unsaid here), I never felt bludgeoned into a specific emotional response.  How certain creative scenarios burrow uncomfortable implications, such as some Polish-flavored anti-communist rhetoric, made me appreciate it even more. 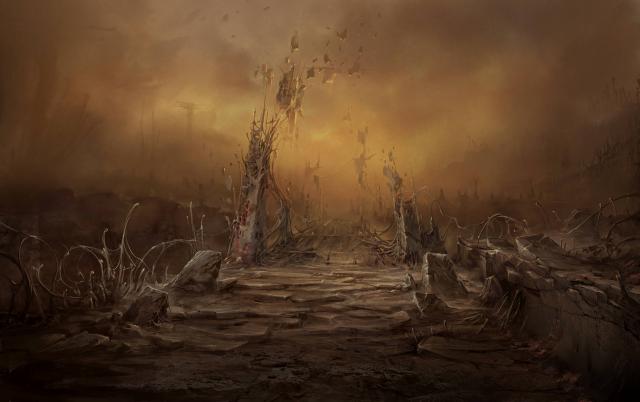 Like Bloober's other clear gem (Observer), The Medium's story succeeds by relying on a clear vision instead of gratuitous shock.  It's not bereft of some uneven misfires, but it feels like the team's most mature work.  This is buoyed by several quality performances as well, such as Kelly Burke as Marianne.  Even the child actors are... fine, which isn't too bad given their typical track record.  A couple of blemishes reside for too long, but it's ultimately an effective tale that never lost my attention.

The duality that exists between the physical & spiritual world isn't just metaphorical; it's a literal gameplay component for roughly a third of the runtime.  Whether your screen is cleaved vertically or horizontally, Marianne is exploring 2 different worlds in tandem.  The severe Eastern Bloc aesthetic of Niwa Workers' Center looks like a concrete paradise compared to the hellish Spirit World that's overwrought with tortured statues perpetually moaning in agony.

To simultaneously manage these two worlds without cooking your hardware, Bloober harkens back to survival-horror templates of fixed camera angles and tank controls - with some of the archaic clunky movement in tow.  How the level design manages this is also interesting: a roadblock within one world carries over to the other.  An open door in the real world may reveal a gross flesh blanket blockading your way in the spiritual plane.  To move forward you must slice it from top to bottom with a straight razor.  Only then is the way fully unlocked. 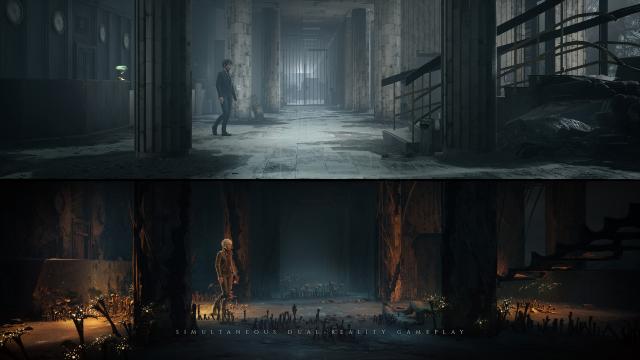 These dynamics are meted out in other ways too; manipulating an object in one world opens pathways in the other, out-of-body experiences allow corporeal Marianne to temporarily fly solo while real-world Marianne stays in place, and so on.  The inverse of these rules apply to the disparate stealth segments between both worlds.  In the spiritual plane, dodging a creature called "The Maw" is about line-of-sight; in the physical plane, you also have to hold your breath when he's close and can only see a semi-visible outline of him.

It's important to note that the puzzle-solving, light stealth, and late-game "action" elements are treated more like interspersed appetizers without feeling like an overriding majority.  Sure, it has that baseline of an old survival-horror game; however, there's a lot of time spent soaking in the atmosphere or doing something as basic as reconfiguring statues with your control stick.

Similar with the story, there's a type of breadcrumb mentality to gameplay where it's maintained just enough to never feel arbitrary.  The mix between tense chases, enjoyable puzzle-solving, and more feels meaningful thanks to their presentation and creative scenarios; that said, the overuse of one item in the second half gave way to missed opportunities.  Imagine early brainteasers about opening a lock to then suddenly getting a blowtorch that'll solve 80% of your later problems.  There's a bit of whiplash from that plus inconsistent rules for the real-world stealth segments.  The variety typically remains simplistic and a couple of concepts aren’t totally polished, but The Medium's strengths are in honoring age-old templates with a fresh spin. 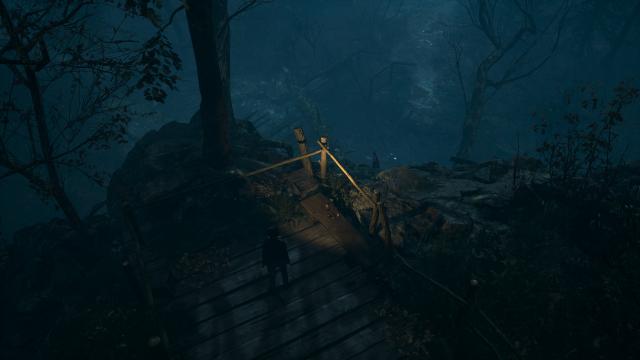 Even if the dual-world gameplay conceits occasionally stumble, the sumptuous visuals consistently dazzle.  This should be clarified from the outset: this is still a $50 middle-market title that has its share of eurojank and rare sub-30 framerate drops. My focus isn't on Bloober's technical prowess with the Unreal Engine, rather I'm highlighting what'll likely be among my favorite art styles of 2021 games.  A lot of that can be thanked to the excellent framing within certain locales; in fact, I'd say I haven't been taken aback to this degree since White Night or Resident Evil Remake.  With the Spirit World utilizing Zdzisław Beksiński's dystopian surrealism and the Real World capturing the tone of Suspiria (2018), several of The Medium's split-screen shots aptly use two distinct color palettes yet harness the same post-communist ire.  What's seen through the human eye is brutalist, Soviet-era architecture; but when looking beyond the surface, every square inch is corrupted by hatred, sorrow, and decay.

Like with the visuals, Bloober also made an inspired choice in assigning dual roles for composing.  Silent Hill maestro Akira Yamaoka and Arkadiusz Reikowski score the physical and spiritual plane, respectively.  There's practically an alchemical synergy between the two juggling such disparate tones, but it comes together so well.  Like the art design, the OST deserves to be in the end-of-year nomination run.  Beyond the soundtrack, the ambience is so thick you could cut it with a knife.  It's not without blemishes though.  For a game where sound design is so important, distracting sound issues would crop up in odd ways: the inconsistent thuds when Marianne's walking in the resort, missing sound queues when using bolt cutters, and other small details.  These annoyances weren't omnipresent, but happened more often than they should.

Value is a straightforward consideration.  It's a linear adventure with various collectibles to recover and the typical runtime will be 7-8 hours.  Aside from appreciating some potential foreshadowing or getting missed collectibles, there's low replay value.  That'll sting for some, but I thought it hit its prescribed quota: a game and a story with a clear beginning, middle, and end. 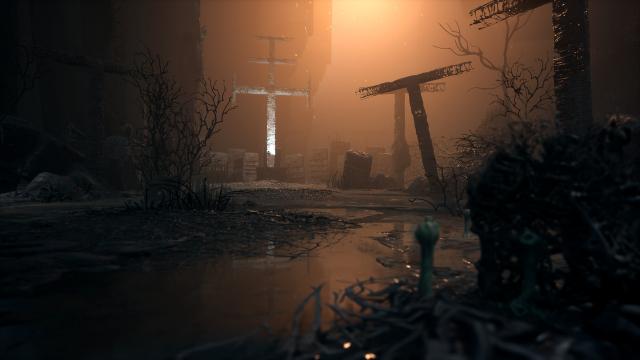 Though not a game to completely forego jump scares, The Medium is nevertheless a great move away from the horror shlock Bloober Team's produced in the past.  Rather than aping horror game-streaming bait like Layers of Fear again, Bloober Team looked towards icons like the Silent Hill series and arrived at something more inspired and filled with its own unique subtext.  There are a few writing and gameplay demons to exorcise, but that only keeps Bloober Team's latest from séance-sational horror game status.

This review is based on a digital copy of The Medium for the XS, provided by the publisher.

A fair score that I agree with 100%. I really enjoyed the game myself, but it isn't for everyone.

I also agree with this score. I enjoyed the Medium but it definitely will not be one of those games that satisfy anyone looking for horror or a lot of action. The story is what kept me going and the atmosphere which I believe they nailed.

Ya know, a full month and four playthroughs since launch, I STILL can't decide whether I think the ending is inspired or just sensationalist. To me, it's the difference between whether this game is good or great and I can't decide how I feel. I've really gotten into The Medium's story and it's in fact the main reason why I play. When I played through the first time, I was thinking like "This is one of the best games ever!" for like the whole second half all the way up to the last scene and that almost ruined the whole thing for me (the whole game builds up to it!) until I went back and took some time to reflect more on it and watch some explainer videos and then played again. Had a different perspective then. But I keep having different perspectives every time and I'm thinking that that's intentional because the developers have said it was their aim to indicate that "there is no universal truth" and I can''t decide if that's genius here when it comes to the way this game concludes or just laziness.

Well anyway, while there are technical imperfections to be found here, there's just a ton to love, including, like you say, the distinctive art style and creepy-ass music that'll put you back at the goth table in high school. I don't play that many games in this genre to have all the perspective that may be needed to recognize genre tropes that might be present, but the premise here and the split-screen play concept made me want to get this one early on. The split-screen parts did indeed turn out to be my favorite game play element.

I wish I could say more about specific characters here, but I don't know how I can say what I'd want to without spoiling key plot details. I guess to keep it as vague as necessary, I'll just say that I truly do get why they split themselves and struggle so much to accept that other part of themselves that they've designated for the absorption of trauma and pain and that I really appreciated how the game play structure was redesigned midway through development to incorporate those key narrative themes of the game directly into how it's played. That's what makes The Medium really stand out to me the most of all.

I'll definitely be paying more attention to Blooper Team's work in the future. 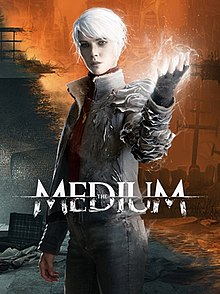 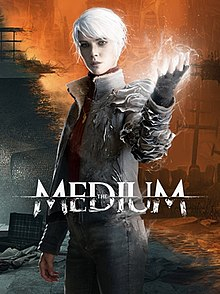