“Made by the developers of the Layers of Fear series…”

From what I can glean, that statement can land horror fans in two extremes: excitement or apathy.  And though my—admittedly limited—experience with Layers eases me into the latter category, Bloober Team tackling the first blockbuster creepypasta is exactly what was needed to pique my interest.  Eschewing the old-school Resident Evil template in the Blair Witch Volume titles, Blair Witch opts for a more intimate first-person perspective and retrofits the disorienting sensation found in Slender: The Eight Pages.  There are sporadic successes in this, but design issues prevent it from leaving a significant impact. 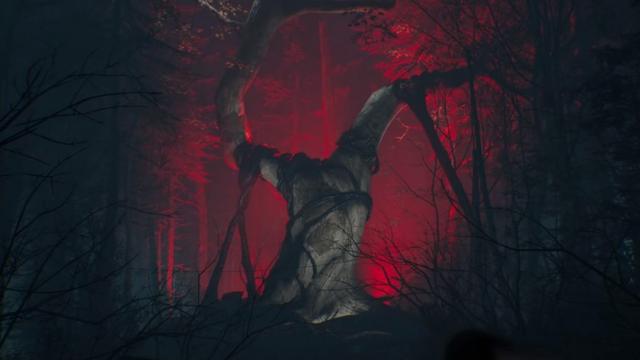 The premise knows how to pull you in.  Set two years after the events of The Blair Witch Project, a young boy named Peter Shannon has gone missing around the infamous Black Hills Forest.  You’ll take control of Ellis, a veteran and former cop, who’s compelled to assist in the search.  But he’s not alone.  His trusty companion Bullet, a Belgian Malinois (note: not a German Shepard!), is there for exploratory and psychological aid.

The psychological support in particular is interesting.  Ellis has PTSD and that’s communicated through gameplay, with him slipping out of consciousness when Bullet may wander too far in-game or during scripted moments.  The series-famous penchant of disorienting anyone embarking into Black Hills is compounded by Ellis’ cognitive disorder.  Tying your focus and direction to Bullet also reveals an unspoken level of trust in him.  This simple bond maintains the firmest footing in respect of the game’s narrative, to the point you’re willing to go through agonizingly-paced parts to ensure his safety. 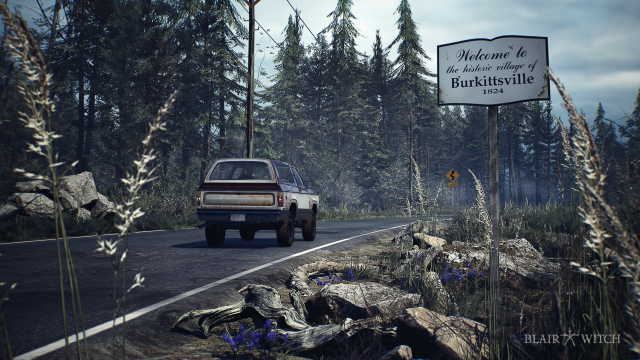 In contrast, Ellis won’t warrant such fervor.  He’s not a bad character per se; in fact, his motivations are understandable and his affection for Bullet goes beyond a canine partner on the job.  I’m just at a loss as to why these writers treat predictable tropes with such guarded commitment.  Being a PTSD-afflicted ex-cop under imprecise circumstances to the audience is enough of a hint.  Toss in throwaway lines from other cops, Ellis’ hazy dialogue about having a ‘connection’ with the Shannon boy, and Bob’s your uncle!  A reveal you probably knew several minutes in… turns out to be the climactic reveal.

These well-worn expectancies continue with Ellis’ ex-wife, Jess.  It’s a shame too because it’s another appealing aspect on paper: troubled man going through this horror to come out the other side reformed, potentially reviving his relationship.  And the mechanical setup works.  Since you only talk via cell phone it’s a two-way street: be sure to answer her calls and remember to call if/when there’s a signal on your end.  This dynamic works, but generic dialogue is exhausting to no end; further, it was tougher to feel any emotion with Jess thanks to Christy Meyer’s lethargic performance.

Blair Witch also stumbles into strange territory regarding the lore.  By the end of Act 1, Black Hills has transmogrified into Silent Hill in all but name.  Besides the disorienting camera when Bullet’s away, Ellis’ past comes back to haunt him.  It’s either in the form of vivid flashbacks, a certain enemy type (immediately discarded afterwards), easter eggs, or aural queues that’ll be triggered.  It’s a dilemma where ardent fans may loathe this copied identity.  In theory, I think the writers—mostly—succeeded in giving a first-hand account of a damaged man who’s haunted by The Blair Witch. 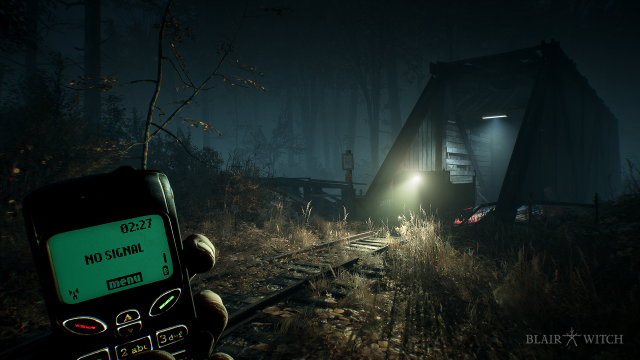 My concern is more directed at the pacing.  For such a disreputable antagonist, The Blair Witch loves to routinely recycle old material to the point of losing its bite.  Story and gameplay alike, that’s an integral takeaway for the whole game: edit, edit, edit.  O how opportune a time as this to put a hacksaw to a game’s length!  Just getting into this explanation makes it tough to concentrate on simply one item at a time.

The winding, delusory woodland is one of Blair Witch’s staples; a centerpiece since the franchise’s start.  That in mind, there’s an argument to be made of when the tricks of time & space manipulation have lost their luster.  Bloober Team felt confident when stating the “five-to-six hour” runtime before launch.  And though they’re correct in that estimation (under-sold if looking at a completionist playthrough), they forgot to say only four hours would feel justified.  From the incessant backtracking to retreaded thematic material, so often you’re wandering through listening to the repeated sounds of rocks falling and twigs breaking in a distance.  Yeah, yeah… I’m supposed to feel like I’m being watched.  But what does it say when this doesn’t register as scary?

Even its best asset stumbles here.  The series’ most iconic location recycles the interior pathways ad infinitum.  But it’s one of the most atmospheric parts of the whole game.  Bloober Team knows claustrophobia and condensed spaces.  Granted, it frustrated me that they artificially reduced walking speed, sensitivity, and a certain bug forces you to crouch to get past a door jamb; nevertheless, jump-scares did work here.  Those effective moments can’t help but feel stretched out by retreading ground over and over.

The best illustration for a standard playthrough would be this: the length of the first film could be cut out here and there would still be ample setup to spare.  And this doesn’t even touch on the collectibles. 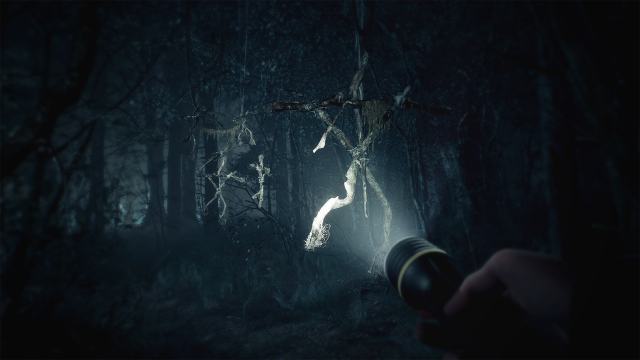 Speaking as a fan of collectibles, I can’t believe how obnoxious this game acts with them.  There are five disparate types to collect: victim photographs, wooden idols, dog tags, psychiatrist’s notes, and actual trash.  In another move of not getting the source material, all 45 of those polaroids repeat the same iconic shot from the first film.  To not be outdone by the ridiculous vomiting of items, the cryptic ways some are hidden will strain anyone’s patience.

Blair Witch is more than its bad pacing, of course.  But the issue of efficiency highlights what are otherwise interesting and multifaceted mechanics.  The base template is akin to a “hiking-with-dog simulator.”  There are no HUD elements tracking stamina nor objective markers to follow, and your guide is Bullet’s next-acquired scent.  Mechanically, Bullet is given a full range of abilities: detecting invisible enemies, seeking necessary items or collectibles, and more.  He’s also got a command wheel, which ninety percent of the time will be utilized to pet him.  Kudos to those involved in the petting animations!  No kudos for those who thought reprimanding him should be included.  For in-game and scripted moments, Bullet only listens to orders so that option is just there for sadists.

Early on, Ellis accumulates a healthy inventory: his backpacked items, flashlight, walkie-talkie, cell phone, and camcorder.  Discounting the walkie, each held item has multiple functions.  My favorite of the bunch is the Nokia phone.  There are a plethora of fun extras and tangible storytelling moments fused into one.  You could have fun prank-calling a pizza guy one moment to giving directions to find a body the next, the latter of which will be acknowledged through dialogue and part of the ending.  There are also playable versions of Cobra and Space Invaders on there, with a 1-to-1 translation of how those old phones felt.  Those details went a long way for me.

An oft-repeated complaint is the puzzle difficulty, or lack thereof.  Many rely on fiddling with magic camcorder tapes to play around with the environment.  Pausing at the right moment will open a locked door, move debris out of the way, or something similar.  Granted, these and non-camcorder puzzles are basic but feel naturally incorporated.  What started as a trek through the woods becomes a slow process of discovering otherworldly phenomena.  Lacking in mental exertion, yes, but bolstered by tone and world-building. 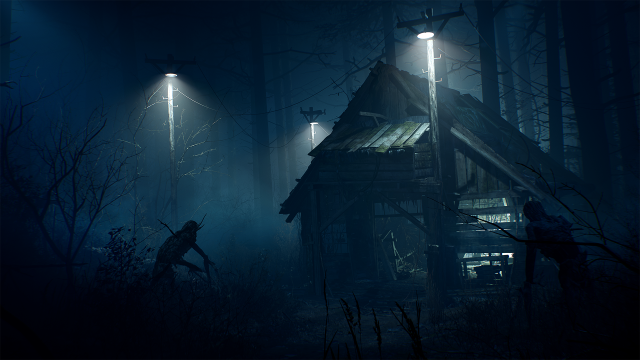 The developer’s first attempt at enemies really misses the mark.  The first encounter does a great job at setting up these tree-beings, but each fight in the woods thereafter is rote: noting where Bullet is facing and keeping your flashlight on them for a second—if that.  It goes to show how unthreatening they feel when I can vanquish them by happenstance.  A stealthier approach is forced later on, which should’ve been the standard.

It’s a shame these issues distract from haunting environmental and sound design.  Visual bugs aside, Bloober Team struck a great balance between the grounded expectations of its found-footage origins with enough visual flourishes to freshen up the woods, such as grimy old saw mills and logging areas.  Voice acting is hit or miss, but sound design and soundtrack capture the mood.  One of the soundtrack’s biggest gems “Into the Woods” is a short distillation of this horrifying adventure and feels comfortable with the Maryland setting.  Despite not being expansive, the soundtrack is the one aspect I can see netting some end-of-year nominations. 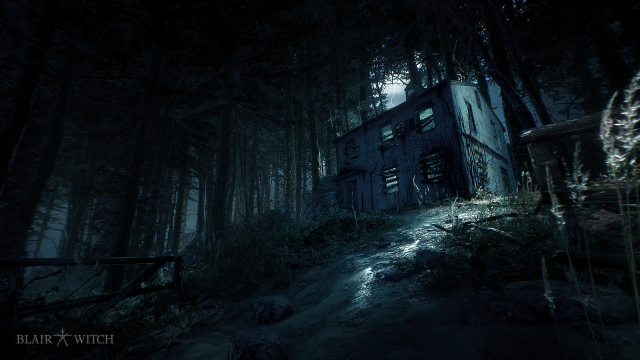 Few are the 2019 games that are this disappointing.  There's a surfeit of noteworthy concepts being reiterated or reconsidered from the source material, and yet few of them are properly translated into a compelling experience.  The jumps of time and space, the unseen character who sounds so close, and the PTSD-stricken madness fomenting in Black Hills - these regurgitated designs lose their effect as time goes on.  There are plenty of games that can make you feel bored or exhausted; few can balance both sensations so often like Blair Witch. 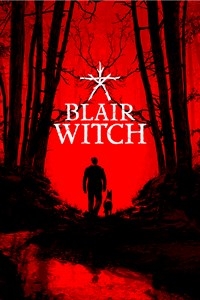