It's never a good sign when a developer announces its game just over a month ahead of release and then shows off gameplay only a week before release. Perhaps Nintendo can get away with this, but it definitely doesn't inspire confidence in an independent developer. Despite this, I was willing to take a chance on Arrayansoft's Gods of Almagest, mostly due to the fact that it's launching as a freaking Vita exclusive in 2021 (although I'm told it's coming to other platforms in the future); a dice roll that not many developers are willing to take at this point. After playing the final product I can see why getting a small amount of hype from the remaining Vita fanbase is about the best Arrayansoft could've asked for. 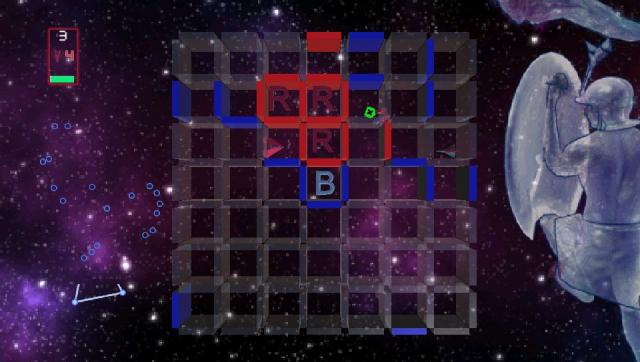 Gods of Almagest is based on the pencil-and-paper game Dots and Boxes, where you have to add lines to a grid in order to make squares and score points. The person who draws the fourth side gets the points, regardless of the construction of the rest of the square. It's a very simple premise that's easy to understand, although in this case not without a little trial and error first, as there's absolutely no effort to explain the mechanics or the goal in Gods of Almagest. In this game you're simply thrown in at the deep end to figure things out for yourself, which means you probably won't immediately pick up on novelties like some maps having solid walls that you can't pass through. Again, this was something I had to discover through trial and error.

The twist on the Dots and Boxes formula here is that, rather than just drawing lines, you're piloting a spaceship in a pseudo-scrolling shooter where you have to fire your lasers at the edges of the grid in order to turn them your colour. Gods of Almagest then experiments with this in interesting ways, so you might have to shoot down enemy ships that head towards you or dodge mines that make their way across the area of space that you're in (shooting them makes them multiply). 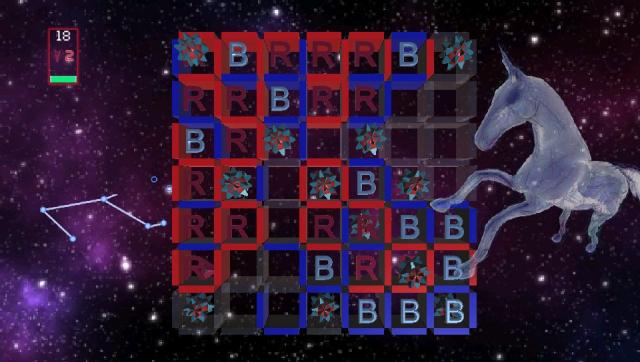 In theory this is a good idea, but in practice it's not fantastic - your ship controls sluggishly and actually shooting the walls is a chore, as you have to hit them at just the right angle to be effective. The end result is a lot of fiddly movement (plus, there are enemy ships that kamikaze towards you and are an absolute nightmare to deal with).

It also doesn't fit in with the theme of the game it's based on, which is one where two players take in turns to place lines on a grid. Here it's just a space shooter where reactions are more important than strategy. Still, I have to give the developer credit for coming up with a fairly original idea. This originality also extends to the story too; the main character of Isaa is sucked into an alternate dimension while exploring Jupiter and is then recruited to fight the gods, which are represented as celestial beings that are based on different constellations. Unfortunately, it's told through awkward interludes between levels and its execution is completely lacking, although it was nice to see constellations that I recognised - Argos Navis and Orion - as gods. 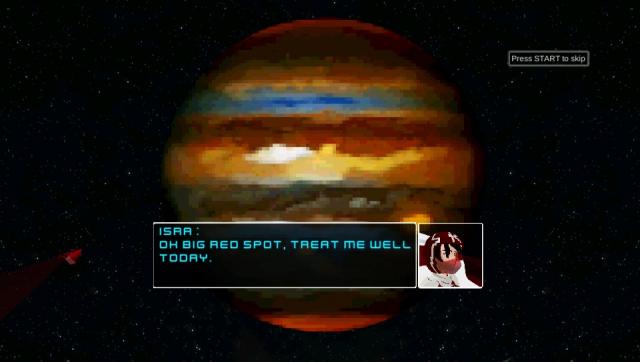 In general, the visuals aren't impressive at all, with the blocky and unimpressive graphics feeling like an artist's first stab at experimenting with 3D. This is the impression you're given from the moment you boot up the game and view a poorly-animated scene that sets up the story. I did enjoy the visuals slightly more in the puzzle sections, where at least the gods take the form of giant cosmic forces, although they encroach on the grid at times which makes it difficult to see what you're doing. The music is also repetitive, but at least it's fairly catchy. On the technical front the game does unfortunately hitch a bit during the loading screens between areas, although it's nothing too major or off-putting.

So Gods of Almagest does at least get some things right, but I have to bring us back around to its flaws - this time in terms of content. There's a story mode, which is a series of eight levels where you have to have to beat the AI at the puzzles. The first few levels are fine, but after that the game feels cheaper and cheaper in terms of difficulty as enemies wait for you to place three sides of a square before sniping the fourth and getting the point, usually while launching a kamikaze spaceship at you at the same time. It's mixed in with different rules that are never explained at the time, so sometimes I could pass through coloured walls and other times I couldn't, making the whole thing feel like a bit of a mess. 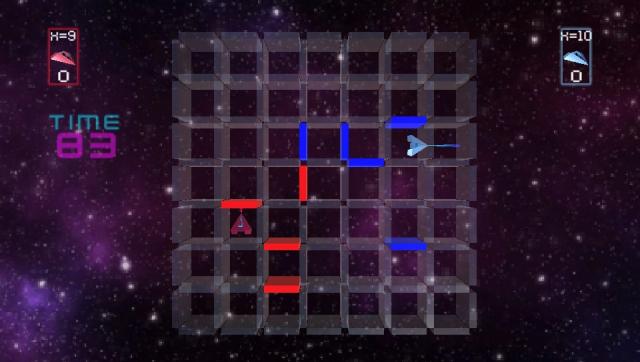 The goal of the story mode is to create enough squares on the grid in order to complete a constellation and move onto the next area, but it never changes much beyond this. As a result it becomes repetitive and tedious, even though there isn't a great amount of content on offer in any case. What is neat is that there's a two player mode on the same console - each player takes one side of the Vita, moving with one analogue stick and firing with the associated shoulder button. This is a cool feature and I imagine it could be quite fun if you have someone else to play with (I wasn't able to test it out due to the COVID lockdown in the UK). With that said, there are only three maps to play on, so it'll inevitably get repetitive, but at least it's more exciting than playing with a pen and pencil!

But this isn't two items that you probably have lying around your house, it's an $8 Vita game, and in that respect it's a bit of a bum deal. I'll leave the review with this parting shot: you save your progress using passwords. Passwords. A 2021 game with passwords. If that doesn't concisely summarise the state of Gods of Almagest then I don't know what does.

Yeah, it just looks bad. I mean I don't mind that the save system works with passwords, that can be even considered a throwback to older games, but oh wow, the package is simply not there. Thanks for the review, I will steer clear of it. PS: I remember Ape Escape on the PSP had similar, share-your-device multiplayer games and that was tons of fun. If anyone is interested I think it can be bought on the PSN. 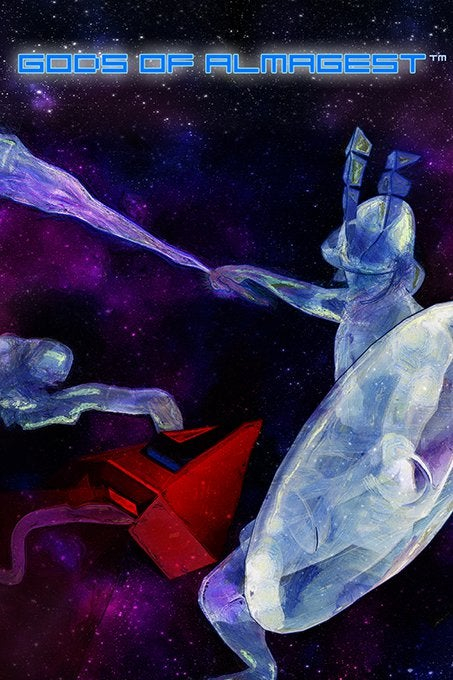