Turok and Turok 2: Seeds of Evil Headed to PS4 on February 25 - News

Turok and Turok 2: Seeds of Evil will launch for the PlayStation 4 via the PlayStation Store on February 25. The games are out now for the Nintendo Switch, Xbox One, and PC via Steam. 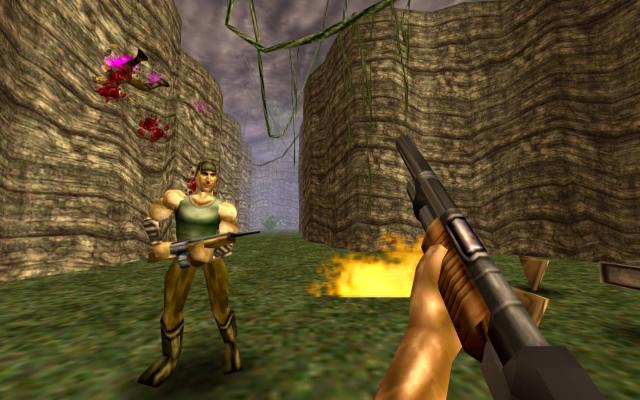 Turok is back and no dinosaur is safe! When it was first released in 1997, Turok introduced gamers to a world teeming with cunning enemies, traps, puzzles and deadly weapons all within a vast 3D environment ready to explore. Now the classic game has been restored and enhanced with a new visual engine and exciting new features to sink your teeth into!

A world where time has no meaning—and evil knows no bounds. Torn from a world long gone, the time traveling warrior Turok has found himself thrust into a savage land torn by conflict. An evil overlord known as ‘The Campaigner’ seeks to shred the fabric of time and rule the universe using an ancient artifact known as “The Chronoscepter.” The Chronoscepter was shattered thousands of years ago in an effort to keep it from falling into evil hands. The Campaigner has constructed a massive focusing array which he plans to use to magnify and pervert the power of the Chronoscepter in order to shatter the barriers between the ages and rule the universe. Turok has vowed to find the eight pieces of the Chronoscepter spread throughout the Lost Land and put an end to The Campaigner’s evil plot…

To learn more you must enter the world of Turok.

Having defeated the Campaigner, Turok throws the Chronocepter into a waiting volcano to destroy it. Unfortunately the blast awakens an even deadlier force—The Primagen. Once again a Turok is tasked with restoring peace to the land and stopping the Primagen from merging Earth with the nether world.

i like turok2,
is that one from the ps2 right?!

N64/PC. I think you are referring to Turok Evolutions.