Despite some indie studios going out of their way to put a creative twist on the formula, it’s hard to deny the abundance of retro-style platformers and side-scrollers from this scene. And yet, developer Archpray Inc. has proven that such a game can still be interesting and enjoyable with its creative puzzle-platformer, MO:Astray. Thanks to some appealing pixel art, inventive mechanics, and intensely atmospheric settings, this cerebral romp manages to stand out amongst the crowd.

MO:Astray can be described as both an action-platformer and a rather slow-burning puzzler; with an aesthetic that fuses eerie gloominess and retro charm. As you might expect with a fairly minimalistic platformer, the game’s thin on the narrative front. Instead, Archpray favors eerie, atmospheric backdrops that paint the scene for its world-building - along with a soundtrack of mostly ambient, sombre melodies. Despite the simplicity in the pixel art, there’s ample detail in the environments, lighting, and animation. These traits, coupled with some dynamic sound design, serve to immerse the player. 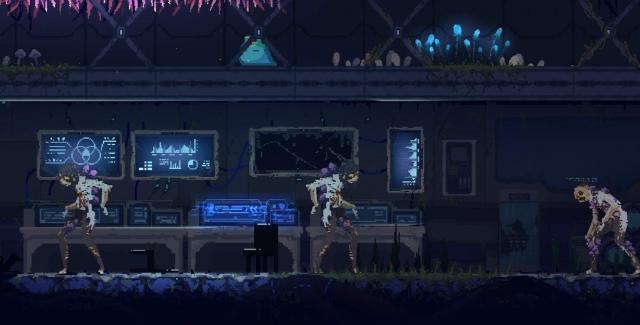 You play as an amorphous gelatinous blob, dropped into an abandoned, ruined laboratory, where something’s clearly gone awry. The game’s sense of wonder and mystery only picks up from there. You’ll traverse corridors increasingly wrought with hazards, along with grotesque monsters that have run amok. Beyond this, the bulk of the narrative is communicated visually, along with a few flashback scenes. There are also a number of descriptive blurbs or “Memory Fragments”, which are picked up when latching onto certain organisms. These unveil a bit more of the story piece-by-piece through text-based dialogue.

And therein lay the unique mechanics and concepts of MO:Astray. As a parasitic blob, you’ll be able to launch and plop your way onto environmental objects and the heads of sauntering creatures. Latching onto them often allows you to “download” information about them Metroid Prime style. But perhaps the neatest aspect of the game lies in the ability to control many of these foes, opening up another, more interesting layer of gameplay. Doing this will allow you to partake in actions that your small blob body doesn’t permit. This includes weathering certain hazards, moving through isolated areas, and accessing event-triggering buttons. 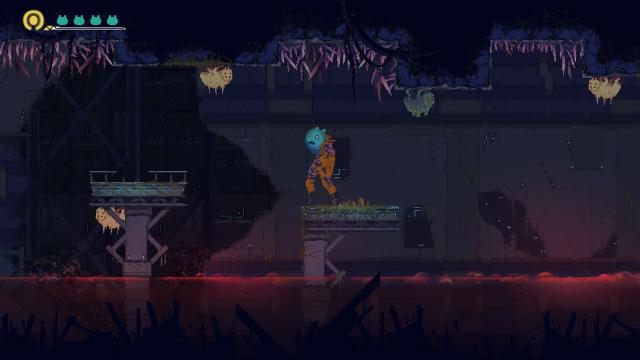 Basic movement is executed with the left joystick, while the right stick displays/aims the trajectory of your blob when launching. Beyond that, your initial abilities are pretty much limited to leaping and “downloading” information. It’s a simple, intuitive system which works quite well and feels smooth. In this sense - and with regards to the linear gameplay - MO:Astray keeps things pretty simple. The complexities that do exist typically take the form of puzzles, along with the precision and swift timing the game demands in its platforming sections.

The unique power to take control of another lifeform - along with a few earned abilities - is the basis for most of MO:Astray’s puzzles. Upgrades include the ability to freeze in mid-air and essentially double jump, which allows you to maneuver better and reach farther areas. You can also swap between the control of two lifeforms, setting the stage for some fun and occasionally disorienting trials. 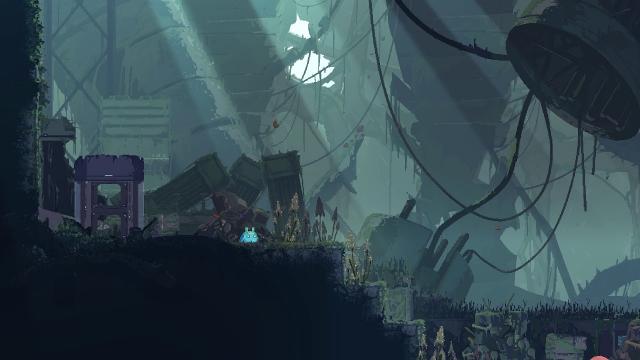 An example includes being forced to quickly switch between the control of two creatures on different floors of a corridor, while avoiding crushing pillars on both. Even the handful of boss fights are designed in semi-puzzle fashion, as you’ll often have to know when to dodge and which areas to target with a given move. These make for some intense showdowns which test your gaming prowess as well as wit. Despite admittedly not being the greatest fan of puzzlers, I found most of the game’s trials to be clever and rewarding. They usually proved enjoyable and manageable - though there is the occasional dull moment and confusing puzzle that bog things down somewhat.

While you’ll be forced to take control of various creatures, much of your time will be spent just hopping around from one area to the next in your default blob form. This is when the game shifts to a more classic action-platforming style. It’s also where I found myself having the most fun more often than not. For my money, the game takes on a notably more swift and exciting pace here. 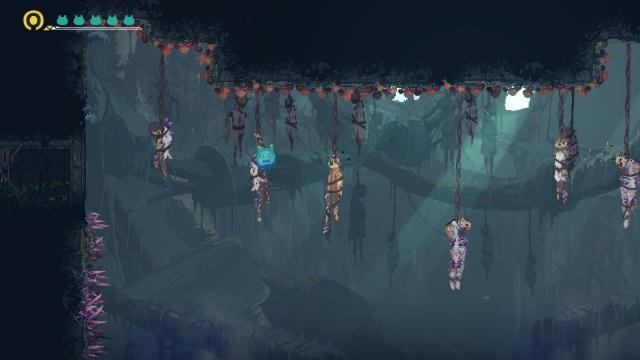 Often, you’ll be maneuvering and hopping through spikes and projectiles, as well as leaping across rotating platforms and treacherous terrain. You’ll also be inching through small, semi-hidden pipes at times to get from place to place. Again, this precision-style platforming and exploration is where Astray thrived for me, moreso than the slower-moving puzzle bouts. It's quite satisfying hopping from wall to wall, evading spike fields, and bouncing across the heads of monsters.

Even with some clever level design and tight mechanics overall - the puzzle portions proved to be more of a mixed bag in terms of excitement and intrigue. Other nitpicks? Well, the game may be a touch minimalistic for some at $15; there's no extra content or local/online multiplayer to speak of. But to its credit, the campaign is somewhat lengthy at five hour-long chapters - depending of course on how long it takes you to work through the puzzles. 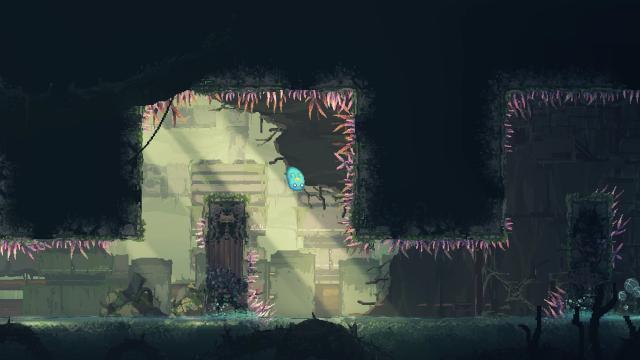 As a fan of platformers with retro and stylistic flair - as well as grim, post-apocalyptic themes - there's much I found appealing here, even if it didn't always blow my hair back. Some satisfying platforming, creative concepts, and solid mechanics provide ample enjoyment. And while there are moments of downtime in the gameplay, the rich, darkly-tinged environments, lush soundtrack, and charming pixel art usually kept me immersed throughout. Overall, MO:Astray is an amusing, atmospheric journey that succeeds in fusing new concepts with a familiar retro style.

This review is based on a digital copy of MO:Astray for the NS, provided by the publisher. 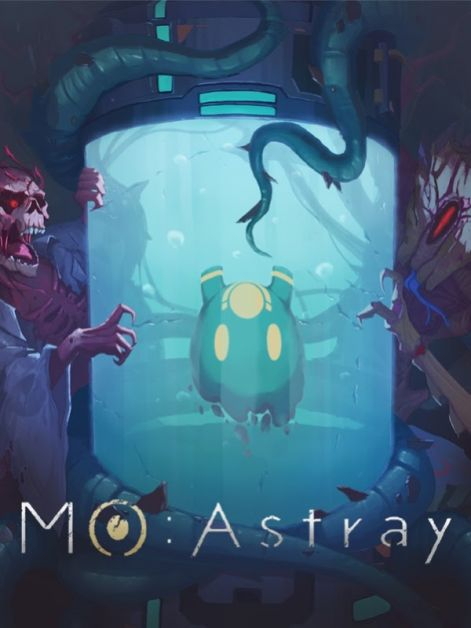