When it comes to unmet expectations, indie developer Hello Games may be the most notorious example of this generation.  The ever-widening expanse of No Man's Sky seemed to have no bounds in sight; shouldering their big dreams behind procedural generation tech netted them mixed results at launch, to the point of causing insane fan furore at the time.  They’ve taken the inverse approach to that since.  The Last Campfire is a humble "Hello Games Short" that's blatantly upfront about its intentions and limitations.  While that restrained design attitude constricts my fiery enthusiasm, there's enough creative kindling to prevent it from completely going out.

You take control of Ember, a lost soul wearing a pillow case who's awakened in a mysterious place.  Shortly thereafter, Ember learns of his place within the world.  At a campfire, a kindly phantom tells him about others like him who came before but have now turned to stone.  These "forlorn" have lost hope, signified as a teal-colored flame, and it's up to you to complete various puzzles to reawaken them. 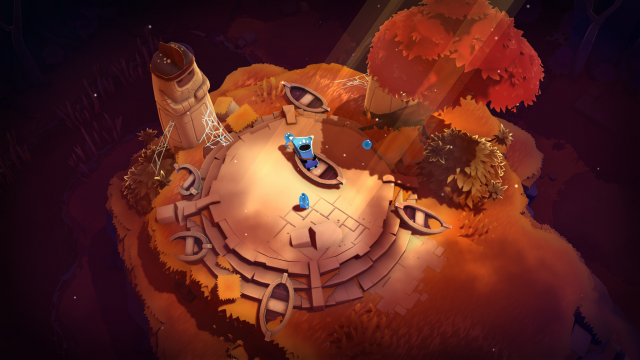 The first successful quality about this Hello Games Short is how it captures the tone of a Pixar Short.  The cutesy characters wearing full headdresses and their obscured faces are just an advertisement away from being the next kid toy craze.  Think your character in Journey squished down to half the height.  But this look doesn't tell Campfire’s whole story; instead, it has a melancholic outlook in examining death and regrets.  I didn't come into this anticipating heavy emotions revolving around lost friendships, one's own inadequacies, and so on; yet, regardless of my expectations, it gives itself wholly to that.

This fairy tale also sells its presentation.  Paring down voice acting roles mainly to Rachel August's narration is an inspired choice.  Her mellifluous cadence is the quintessential example of a British elementary school teacher reading to a group of attentive kids.  Her range when dramatizing forlorn & male voices is truly impressive.  In voice and script, neither betrays the mixture of the elegiac and whimsical.

What it sells in emotion doesn't totally disregard the plain, clichéd structure.  Although I don't want to grind too hard on an E-rated game like this, if you've read a panoply of children's tales then you know the drill.  What's the obvious reveal about the one royal creature giving a Wizard of Oz vibe?  These types of twists are well-worn and openly choreographed to the point it's impossible to be surprised.  Although there are nice journal collectibles to find, I also would've wished more script work was given to the forlorn; then they would've felt more like lost souls to empathize with rather than just another mission objective.

That sense of each soul feeling like a rote goal to complete envelopes The Last Campfire's template.

The zoomed-out/quasi-fixed camera perspective harkens back to older Legend of Zelda titles.  Movement around the game world is quite simple and intuitive: getting close to climbable spots makes Ember mount the cliff face, searching for inventory objects is automatically done when the story calls for it, the user interface (UI) informs you of how many collectibles are within your area, and most of your actions feel snappy.  Aside from issues like temporarily losing yourself because of the camera or getting it past the boundaries of the map, it's a functional game.

The main issue comes back to how most of the puzzles are one-note and boring.  There's a modestly wide pool of different concepts on offer: opening up areas within the world, delivering fire to specific spots without it being blown out, rotating cubes to make platforms, redirecting light with mirrors, diverting pressure through pipes, and so on.  It thoroughly covers the expected bases.  After it was all said and done, I think less than one-quarter of all puzzles gave me any sort of pause; eventually it became so typical I was just reacting instead of thinking.  The beginning forest level was easy-peasy in terms of both the forlorn and the overworld's puzzles.  It's shocking how long it takes to ramp up in complexity.

There is one item awarded to you in Zelda-esque fashion: a magical horn able to telekinetically control metal objects.  Said control extends to moving ladders, maneuvering floating platforms, rolling ginormous cubes, and more.  Outside of one pipe alignment puzzle and some hidden collectibles, the rest of the mentally-taxing conundrums stemmed from this item.  It grew long-in-the-tooth towards the end, but I never outright revolted against it thanks to how satisfying it felt to command objects.  The way its firm ruleset deliberates how cubes can climb, the limited area with which they can rotate, etc. is also easily communicated.  One slightly annoying error is how certain maps enable you to lose your cube platform, forcing a restart in the process. 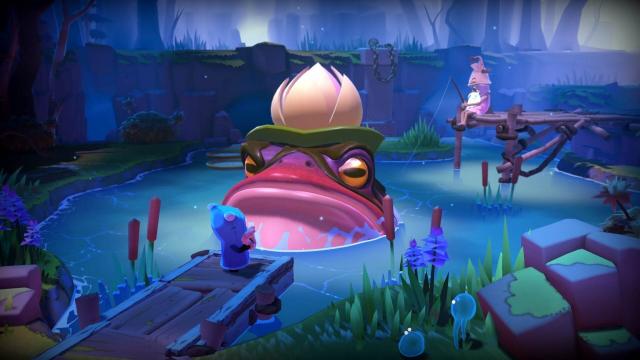 Oddly enough, some of my favorite gameplay moments were when I was promptly denied another puzzle.  Not every forlorn statue within reach is ready for you to find their lost hope.  For me those disruptions landed squarely between somber and sweet.  Since I was already in a goal-completing mindset, taking a step back to consider the intention behind this really moved me.  Just as in life, you can't force yourself into the role of 'saving' someone; a mutual concession is required, which isn't easy for the party that's revealing their personal regrets.  The memory of most puzzles has already begun to fade, but those I couldn't save stick with me.

Campfire's humility seeps through every crevice of its early-Zelda homage, for better or worse.  How this disrupted gameplay for me was how... instinctual the problem-solving mode of my brain became, yet it rarely got the nourishment expected.  Even the little touches like every forlorn puzzle having a title or how the narrator discretely gives a line during each completed stage didn't click for me.  Perhaps there's a grand thematic tapestry players can weave from each of them, but all I could say was "yeah, cool, but I'm almost done with this so whatever."  It's almost as if the underwhelming difficulty with so many puzzles deflated my emotional investment.

From a team whose vision enabled them to create a complete universe, restraining their creativity to a few forests, meadows, and ruins hasn't weakened their style.  The Funko-Pop! body and pillow-case garb for Ember and his species is begging to be made into huge plush toys.  The aesthetic reminds me of the Link's Awakening remake released last year; animals, enemies, and stonework give off this playful vibe.  Supporting this is good technical design for visuals and audio.  Limited as it may be, there's quality craftsmanship to admire in details like UI, cloth physics, and animations. 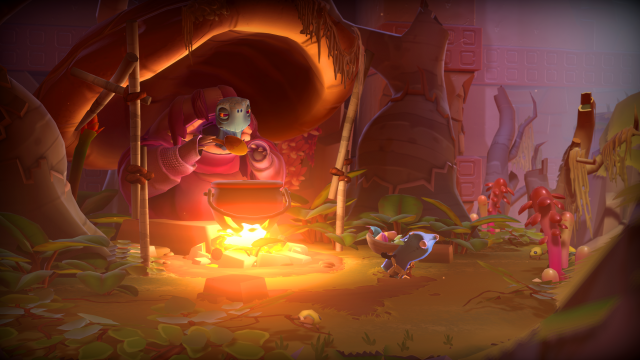 Value is an interesting dilemma for Campfire.  Even when occasionally leaving the controller, I'm still surprised I netted over six hours in a completionist run. I'm on the high-end of that runtime because a couple of hidden stone plinths had me going in circles.  With this info considered, I think it hits the average consumerist's dollar-per-hour threshold ($15 retail price).  My consideration of that still leaves me at odds because the modest runtime simply left me modestly engaged.

When looking at the story behind the game, I respect Hello Games' modesty.  Such admiration becomes strained when considering the limitations of this homage.  The team were able realign their programming & artistic chops for something more condensed; and yet, they didn't dip their toes into adventurous territory quite enough.  Their reserved approach to otherwise grand themes came as a surprise, but how I arrived at that conclusion felt like going through the motions.  If No Man's Sky represents the roaring blaze in a fire pit, The Last Campfire is the residual embers calmly accompanying you through the night.  Maybe that's what you need.