Justice Sucks: Recharged is a Sequel to Roombo: First Blood, Announced for Consoles and PC - News

Samurai Punk has announced action comedy sandbox game, Justice Sucks: Recharged, for consoles and PC via Steam. It will launch in late 2020. The full reveal will happen at PAX Online 2020, which runs from September 12 to 20. 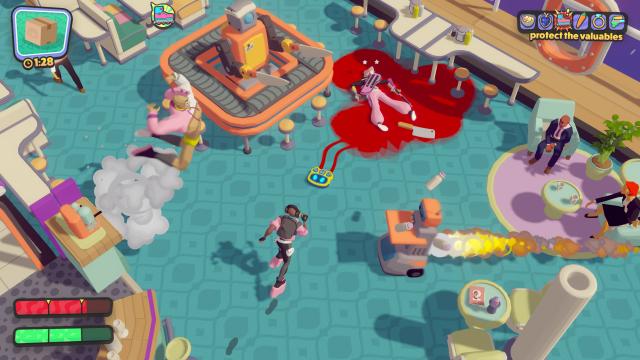 Roombo: First Blood was released in 2019 and was an unexpected hit with players, and the team received frequent requests to see more from Roombo. The team listened to player feedback and began to work to envision a sequel that lived up to the potential of the concept, addressed issues with the first game and offered new and exciting features to create a game that fans can truly love, and one that keeps giving. Justice Sucks: Recharged has a stronger focus on sandbox mechanics, replayability, and offers a far greater variety of ways for players to express themselves in hilarious vacuum stealth action. The game is planned to be released in late 2020, with a series of major content updates planned that will add new worlds, enemies, abilities, and more.

Justice Sucks: Recharged is an action comedy sandbox game about a killer robot vacuum cleaner on a quest for vengeance through a Neo-90s multiverse. Cuteness, comedy and over-the-top gruesome action collide like you’ve never seen before.