If you’ve ever wondered what it'd be like to be the creature from Alien - or a comparably large, grotesque monster from a horror flick - Carrion may be the game for you. Accurately described as “reverse-horror,” it's a violent slaughter-fest from start to finish, laced with Metroidvania-style exploration and satisfying combat that involves eating and tossing around foes. Phobia taps into a very visceral sensibility with Carrion’s fluid, action-based mechanics, which are both simple and fun to execute. And it’s this off-the-wall feature that serves as the crux of the game’s enjoyment.

You’ll find it endlessly satisfying to effortlessly rip doors from their hinges, throw things around, and gruesomely devour helpless, shrieking victims. Then you’ll wonder if there’s something wrong with you for getting such a kick out of this. With that said, there are a few duller moments and ambiguities that hold back this otherwise amusing horror romp. Overall, though, Carrion offers a uniquely fun - and slightly disturbing - gameplay experience. 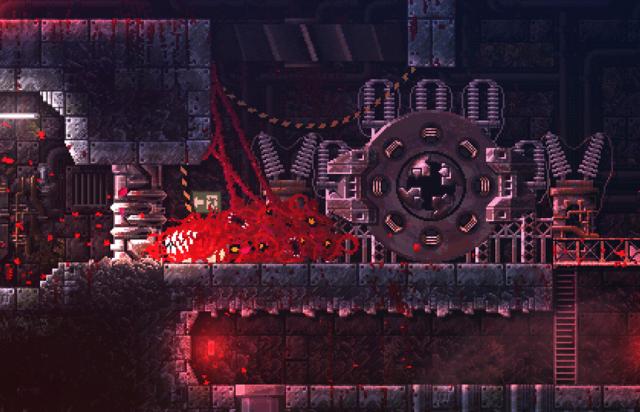 For the most part, Carrion is light on an in-your-face narrative or cinematic bombast. Rather, the game favors immersing players with its dark, thick sense of atmosphere, charming pixel art, chilling music, and subtle bits of visual storytelling. All that’s really conveyed is that you’re a massive, mutated, and deadly monster seeking to contaminate and escape a vast lab facility. Beyond that, you’re largely left to fill in the details as you wander through sprawling industrial areas, toxic caverns, and underwater depths.

In typical Metroidvania style, the layout of the vast, elaborate settings melds open-world exploration with linear progression. Areas are often littered with levers, mechanical doors, and other elements which require your monstrous antihero to gain abilities to traverse. Early on, for instance, you’ll gain the ability to shoot a web through certain obstructions to push levers. You’ll also get the power to bust through walls as you grow in size later on, and can slip through underwater barriers by morphing into a grotesque wormy form. You’ll even be able to control the mind of a person in range, who can then gun down foes and open unreachable areas. 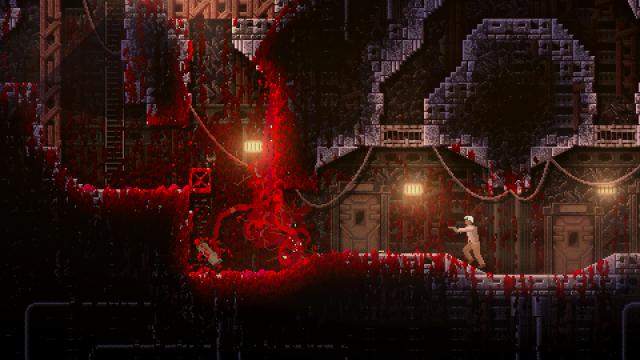 Moments like these serve to mix things up and inject some clever puzzle elements into the gameplay. Often, the ability to complete puzzles will be contingent on your size and the amount of health you have. For instance, you'll need to be in a smaller form (which occurs when health is low) to fling a web through a wall. Meanwhile, smashing through certain barriers requires you to be larger. This feature can be a bit cumbersome at times, but it succeeds in adding depth and intrigue to the experience.

On the one hand, the puzzle-style progression and environmental elements often add nuance to the gameplay. It makes for some interesting, dynamic level design while offering a sense of character. And yet, these elements will make excessive backtracking almost guaranteed. This is only exacerbated with the lack of a map system, waypoints, or conveyed objectives. This sense of minimalism definitely adds to the game’s dark and chilling atmosphere. But from a gameplay standpoint, it can hinder the otherwise exciting experience, leading to frustrating, aimless wandering. For a sprawling Metroidvania such as this, clearer navigation and/or objectives probably should have been included in some form. 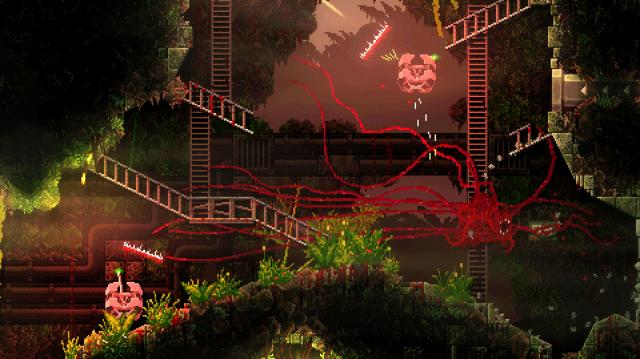 Still, Carrion’s rewarding system of progression and thrilling combat usually makes up for this occasional ambiguity. As a huge amorphous monster with razor-sharp teeth, you can utterly annihilate your human and robotic prey. The main feature is the ability to eat people, which neutralizes foes while allowing you to restore some health. Often, you’ll be able to completely wipe out a room occupied with human targets in seconds, plowing through obstructions and swiftly devouring prey. You can also grab your victims - as well as steel doors - with your large tentacles and toss them around like ragdolls, bashing them into walls until they turn into a bloody, mangled pulp. Yes, despite the pixelated art style, Carrion is quite a graphic affair. This is also the area in which the game shines most.

While one wouldn’t necessarily expect to have much fun being so overpowered, this is the most enjoyable aspect of Carrion. Taking on the role of a devastating killing machine provides ample exhilaration seldom matched in action games. Still, those looking for a bit of challenge on the combat front will eventually get some - roughly an hour into this 4-5 hour journey. Pesky flying droids and vehicular artillery will show up to give you some fits, as will humans wielding guns, spiked shields, and even flamethrowers. This is where sheer brute force and speed take a backseat to strategy, as you’ll often need to plan your attack more wisely. You may have to sneak behind a shielded foe, or scurry to a body of water when dealing with the flamethrowers, etc. 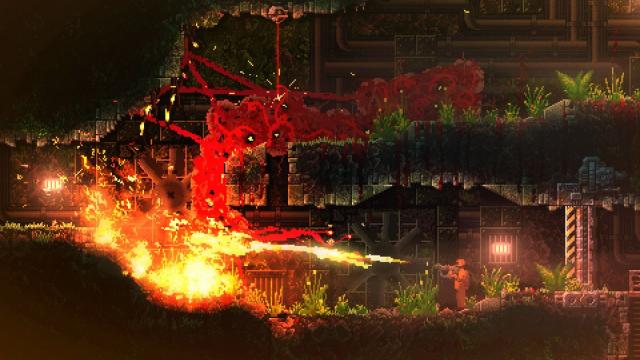 If anything, the game could have done with more of these action-packed bouts, as there are moments where things slow down somewhat. This can occur during the aforementioned backtracking, to be sure. Yet, that's also the case in the game’s few moments where you have to play brief stints as a scientist. These more passive flashback scenes serve to reveal a bit more about the monster’s origins and fill in some backstory, but they mostly tend to feel dull, especially compared to the fast-paced, gory insanity that makes up the bulk of the game. 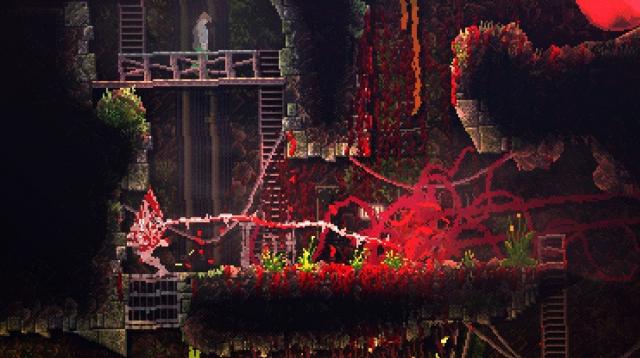 Ultimately, Carrion thrives in a number of areas - namely the awesome horror themes, the monstrous role-playing, and the immensely fun combat that comes with it. It also captivates with a delightful art-style and an eerie soundtrack, balancing simple retro flair with a thick, ominous atmosphere. The level design impresses with a slew of unique biomes, cleverly interwoven into a single, massive lair. Still, one can’t help but feel there’s a bit of missed potential with developer Phobia’s otherwise amusing romp. Factoring out the mindless wandering, the game runs a bit short, and some convoluted navigation can slow things down a tad. These few weaknesses aside, though, Carrion is a gripping Metroidvania that fans of horror and/or retro-style insanity should get a kick out of.

This review is based on a digital copy of Carrion for the XOne, provided by the publisher.

I put this on my wishlist a couple of days ago. I'm not a fan of pixel art, so that's off-putting to me, but I like the reverse horror concept and saw some of the combat, which looks viscerally fun. Shame to hear about the navigation difficulties though; something that should've been relatively easy to fix as well.

I do think this weakness is exaggerated a tad for me as my sense of direction is awful - and I suppose the minimalism can be seen as adding to the atmosphere.. But do think some sort of map system or waypoints would have helped, given that this is essentially a Metroidvania with tons of interconnected areas and transports. Overall it's a lot of fun though, and the mindless wandering rarely got too out of hand.