It’s time once again to save humanity, and this time you’ll be redeeming it by way of the immortal Daughters of the Red Mother. With a bold visual style of only black, white, and reds, Othercide achieves a dark and sinister feel with minimal game assets required. In this brooding world of tactics, you’ll not only need to level-up and strengthen your army of Daughters, but sacrifice them as well for the greater good.

With ever-increasing depth and layers of intricate systems, each new run will see you closer and closer to your final goal - the ending of suffering and death! In a first-of-its-kind, as far as I’m aware, developer Lightbulb Crew has successfully blended a complex turn-based strategy game with layers and layers of roguelike progression. 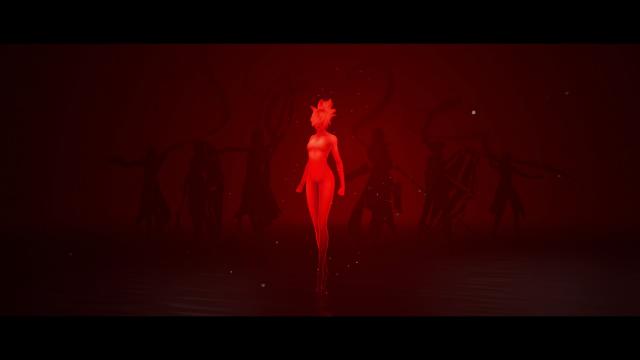 The story of Othercide is a bit convoluted, akin to something like the Souls series, where you’re not entirely sure what’s going on, but if you follow close enough you won't be left completely in the dark. The Red Mother is the greatest warrior who ever lived, and her Daughters are echoes of her; born to beat back the invading evil, but never truly die. Each death finds them reborn again, in an eternal loop, ready to take up arms and continue the fight once more. This is the core of the roguelike mechanic at play.

If you’ve played anything like XCOM before then you’ll feel right at home in Othercide. Teams are comprised of 2-4 Daughters, depending on the mission type. Starting classes consist of Shieldbearer (a high-health tank class), Blademaster (melee damage), and Soulslinger (your ranged attacker). You can mix and match whichever grouping you like (I preferred two Soulslinger’s and a Blademaster most of the time). Missions range from standard Hunts to Rescue and Survival. Rescue missions are especially rare, as successfully completing them will reward you with a token of resurrection to bring back a fallen Daughter. While I would have liked to have seen more variety in mission types, there really is plenty else going on to make up for it. 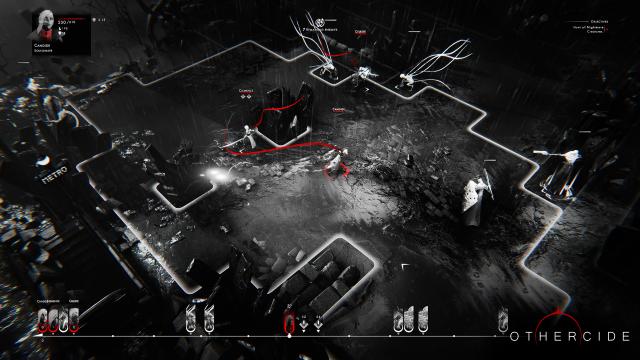 A timeline along the bottom of the screen displays turn order and any special attacks that are coming up are clearly marked. Managing it is the name of the game. Part of what makes Othercide unique, though, is the way in which it handles your action points (AP). Starting with 100, you can move and act in any order you wish. If you use 50 AP or less, you’ll move to the midpoint on the timeline at the end of your turn, thus positioning you to act again sooner. Usually you can move a little and get a single attack off with 50 AP. Or take two attacks and not move at all. However, if you use even 1 AP over 50, then you go to the back of the line - dead last in the turn order. That's not generally something you want to do, but given the situation, you may actually benefit from using all 100AP so that an adversary doesn’t get a killer attack off. This detail adds options and choices, mixing up the flow of basic combat.

This brings me to another very interesting aspect of Othercide: there’s no healing. That’s right, no healing for your Daughters of any kind. Well, unless you sacrifice one of them permanently! In order to heal a character, you have to sacrifice a Daughter of equal or greater level to heal up fully. This adds a distinctive twist on how you approach battles. You can't just rush in, take the hits to make a play, and then pop a stim-pack back to full health. Oh no. Here everything has to be precisely calculated to ensure you take little to no damage, especially if you plan on making a serious run on the boss later. 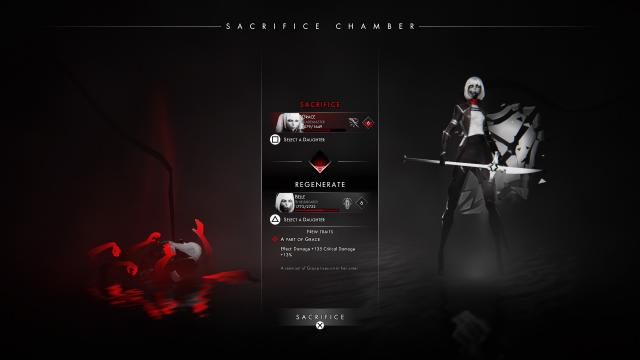 Sacrificing a Daughter isn’t all bad though. Not only will you get to heal another Daughter to full health, but they will take on an attribute from them as well. Blademasters will bestow a hefty bonus to damage, while Shieldbearers lend a large HP increase. In addition to that, Daughters will learn Traits to boost their stats as they experience more and more battles. Traits include +Critical Chance, +AP, and +EXP, to name a few. These traits will also carry over when resurrecting one of your Daughters. The idea is to keep building stronger and hardier warriors through sacrifice, resurrection, and trait gains, making each successive run a fair bit more manageable.

You can further customize your Daughters of destruction with modifiers - referred to as Memories - which are gained through the normal flow of battle when defeating foes. Memories can strengthen a base attack, increase critical damage, delay the actions of an enemy on the timeline, and more. When you feel like a boss has too much of an upper hand, try tweaking your Memories a bit. By tuning your Daughters' Memories to the battles ahead, you can tailor your team to best suit any situation. 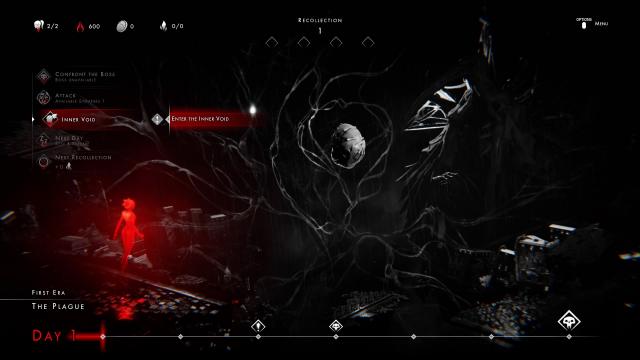 The game is divided into five Eras. Each Era is comprised of 7 Days on a timeline, culminating in a boss fight on the 7th day. Each day you have the option to take on one or more missions before proceeding to the next day. This allows you to choose whether to strengthen your daughters more, or quickly move on to the boss. Should you defeat the boss, you’ll enter the next Era. More than likely though, on your first attempt at least, you’ll lose that encounter and have to start a new run. Each new “run” is known as a Recollection.

Every time your team of Daughters are wiped out, whether in the 1st Era or the 5th, you’ll start a new Recollection from the beginning - Day 1 Era 1. Unlike many roguelike games, instead of gaining inches with each fresh run, the gains are more modest, thanks to permanent perks acquired at the end of each Recollection. Notable perks include: resurrecting Daughters from past runs, being able to skip Eras (so you don’t have to grind the starter Eras over and over), and other worthwhile perks like +30% HP and Daughters being born at higher starting levels. The more you stack together, the stronger your Daughters become.

The perks are so well balanced and thoughtfully implemented that I found myself absolutely addicted to this game. Most times a roguelike will wear on me after several runs, because of the repetition of early stages and minimal gains toward meaningful progress. Othercide, however, manages to make each subsequent run feel like “This will be the run!” thanks to being able to stack permanent perks. Couple that with the stellar turn-based tactical combat and I just couldn’t get enough. Even after spending hours on a given playthrough, I’d immediately jump back in for another run. 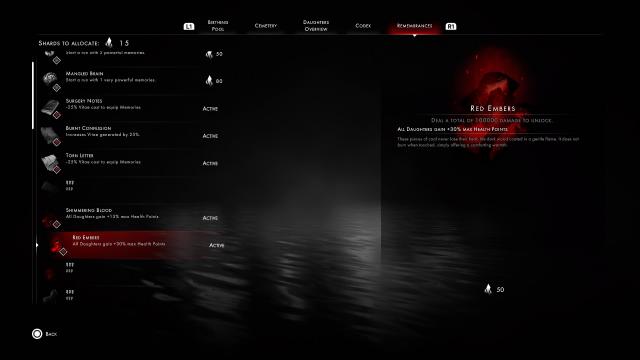 Now, for every up there is a down, and Othercide isn’t a flawless game by any means. Some minor technical issues would cause commands to not issue on occasion, or the framerate would stutter. The load times felt a tad on the long side, and the font size is way too small. Mind you I’m playing on a 65” OLED TV about 6 feet away and still I was squinting. Also, for as limited as the voice acting is, it could have benefited from a few more lines to rotate through during battles, as they begin to repeat too frequently. Similarly, if you replay the same Era several times, the maps and enemy placement will repeat. This could have been rectified easily by the development team with the introduction of randomization.

Overall, though, Othercide is a fantastic game created by a small indie team (this is only their second game release). Deep and flexible options keep the strategy aspects interesting throughout. The stylish art direction and over the top action are always pleasing to watch too. But above all thoughtful balancing and implementation of perks and upgrades make this the example to follow when it comes to meaningful progression with roguelike gameplay. If you’re a fan of either genre, you’d be a fool to miss out on this gem, even if it does have a few minor technical issues.

This review is based on a digital copy of Othercide for the PS4, provided by the publisher.