Partnership working can lead to great achievements in the gaming space - look no further than things like Kingdom Hearts combining beloved Disney and Final Fantasy characters into one universe, or a character like Solid Snake appearing in Super Smash Bros. This works on a much smaller scale too; Demon's Tier+ is the latest collaboration between developers COWCAT Games and Diabolical Mind, marking the third time they have worked together, following Xenon Valkyrie+ and Riddled Corpses Ex. This time around, a genre shift to a dungeon-crawling roguelike works well for the pair. Although not quite reaching the heights of Riddled Corpses, it shows a marked improvement over Xenon Valkyrie. 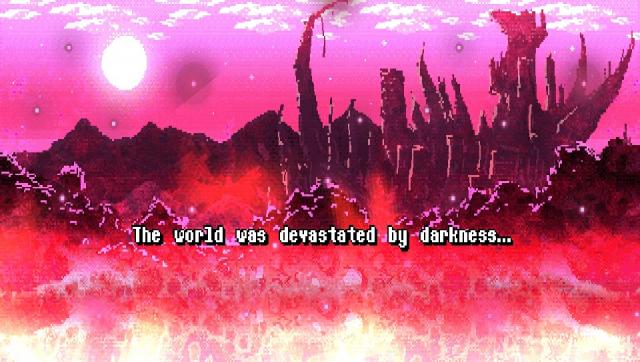 An opening text scrawl with animated backgrounds sets the scene for the game. King Thosgar had been corrupted by a demon named Drarnor, but was defeated by a powerful hero and sealed away. 1200 years later, demons return to the now-peaceful land and it's up to you, taking control of one of a number of different character classes, to defeat Thosgar once again and rid the evil from this land once and for all. It's all standard fare, but it is delivered in a slightly inventive fashion - you'll unlock little bits of information each time you make it further in a run, although never anything that elevates the plot beyond mostly being a framing device.

Thankfully, the game's presentation is pretty strong to make up for this. The pixel graphic style that Diabolical Mind introduced in its previous titles is fully present here. Characters look somewhat anime in their proportions during conversation scenes and there's an authentic feel to it all, while in-game sprites look quite tiny on the Vita's screen but are drawn well enough. There's a strong use of colour here - oranges, purples, and reds permeate, which I quite liked, and the lighting used in the dungeons does a good job of making the background elements look livelier. 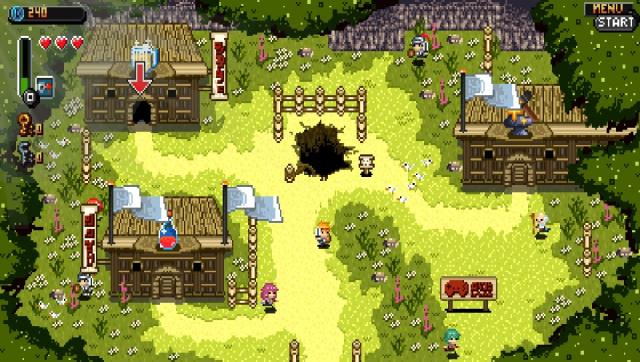 In game, you'll be in familiar territory if you've played any of the sea of indie dungeon-crawling roguelike RPGs of recent years in the vein of The Binding of Isaac. At the start, you're able to explore a single-screen town comprising of a tavern (allows you to change your character class), a shop (allows you to buy potions and keys), and a blacksmith (allows you to craft new weapons). The currency in all of these places is 'D-Tokens', which are collected by killing enemies in dungeons and then making it back to the surface unharmed. You can only do that by making it to the end and defeating the final boss, or using an escape rope. If you die while exploring, you'll lose your D-Tokens and spawn a tombstone, which can be smashed to recover those lost D-Tokens if you reach it on your subsequent run.

Moment-to-moment gameplay within the dungeons consists of moving your chosen character with one analogue stick and firing with another. It's not dissimilar to a twin-stick shooter (projectiles differ slightly for each character), but you're also able to reflect incoming attacks with a dodge move mapped to the shoulder button. Maps are randomly generated, although each one has the same basic elements, most notably the enemies, which range from wizards which flit about and fire projectiles at you to slow moving slimes that do an enormous amount of damage if you let them get close. In general I found the AI to be competent, although I did encounter a few glitches such as them getting stuck in walls or not taking damage when they're supposed to. 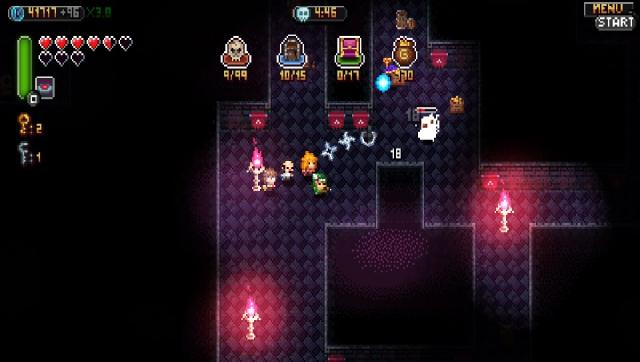 You'll also come across things like explosive barrels and traps on the floor, such as spikes which pop out when you run over them, but most notable are the occasional cages you come across that contain trapped citizens. If you free them (using keys purchased with D-Tokens in the overworld), they'll join you for the rest of your run and provide extra firepower - a nice little bonus for exploring properly. You won't have all the time in the world to examine every route; each floor has a five minute timer, after which an indestructible 'reaper' appears that will slowly move towards you, adding a sense of urgency to the proceedings.

By finding chests on each floor of the dungeon that contain gold coins (or picking them up from downed enemies), you can buy upgrades between floors, which provide permanent boosts for the rest of that run - things like extra health, damage, defence, speed, etc. These are invaluable for ensuring steady progress (after all, you won't make it very far with just three hearts of health and being unable to do proper damage to speedy foes) and strike a nice balance with the D-Token system to ensure the two currencies remain distinct (upgrades bought with coins disappear at the end of a run, while D-Token upgrades are permanent). It's all standard roguelike stuff, but it works well all the same. 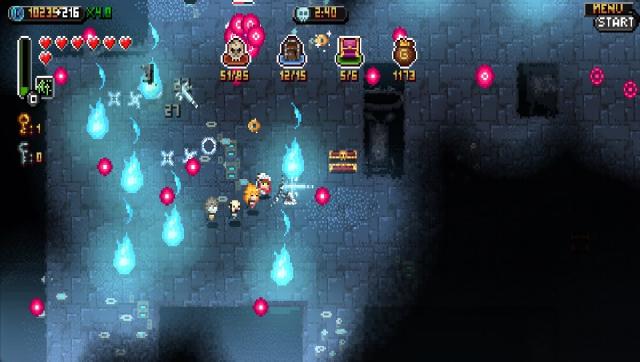 Each dungeon has its own objective for how to proceed, ranging from simply finding a chest containing a key that allows you open the door to the next floor, to defeating all the enemies and hitting the reaper before escaping. Once you've progressed through three floors you'll come up against a boss. These tend to be a mix of bullet-hell mechanics (dodging through tonnes of projectiles) and pattern recognition. They're absolutely fine - not quite as impressive as the bosses in Riddled Corpses, but they at least use distinct and interesting mechanics.

There are a number of different character classes to choose from (you can buy new classes with D-Tokens), each with their own unique ability, which can aid you during your runs. For example, the Knight is able to buff his defence substantially for a brief period, while the cleric can heal. You'll also unlock two extra classes after defeating each 'tier' of the game, but herein lies my biggest problem with Demon's Tier - difficulty. I quickly found that using the cleric (who can heal) makes the start of the game incredibly easy, and after you beat it once you unlock a higher 'tier', which features the same content but with tougher foes and lesser rewards. However, upon completing it once you unlock the Valkyrie, a new character class who can heal twice as much as the cleric and hit harder, making tier 2 a doddle too. You then unlock tier 3 and another new character class, but I was able to defeat this harder difficulty with the Valkyrie again on my first try. 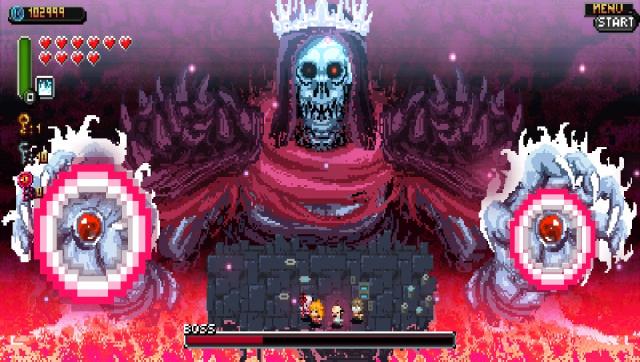 It meant that a game I was expecting to slowly whittle away at over time (as with Riddled Corpses) became one that I managed to beat in an afternoon, which was a shame, but at least the discount price meant it didn't feel like too much of a disappointment.

A few other niggles I had with things like lack of item and upgrade descriptions don't detract from the fact that I had an enjoyable time with the game overall. If this is the swansong for COWCAT and Diabolical Mind on Vita, then it's a very good way to go out.

This review is based on a digital copy of Demon's Tier+ for the PSV, provided by the publisher. 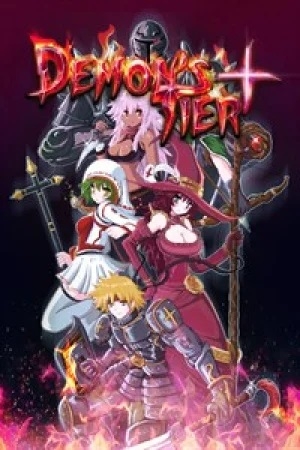