Microsoft and Sony are set to launch their next generation consoles, the Xbox Series X and PlayStation 5, this holiday season. While we don't have release dates or a launch price for either console, Ampere Analysis' research director for games Piers Harding-Rolls has released a report on his predictions for the upcoming generation.

"While the market is still substantial and likely to be consistently large at least during the next console life cycle, what has been proven over the last decade is that even with significant resources ploughed into growing adoption on a global basis, including more serious entry into a series of additional territories, substantial hardware unit sales growth for Sony and Microsoft combined has not materialised," Harding-Rolls said.

Harding-Rolls expects sales for Sony and Microsoft's next generation consoles to decline slightly compared to the current generation. Through 2024 he predicts the two consoles will sell 103 million units combined, which is down from 109 million combined units of the PlayStation 4 and Xbox One through the same amount of time.

He is predicting the install base of the PS4 to be 66 million by the end of 2024, compared to 37 million sold for the Xbox Series X. 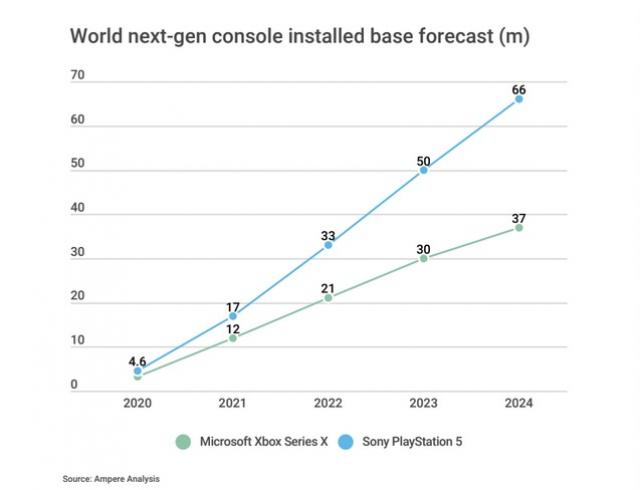 For their respected launched, he expects the PS5 to sell 4.6 million units this holiday season and the Xbox Series X to sell 3.3 million units. By the end of 2021 he predicts the Sony to have sold 17 million PS5 consoles, compared to 12 million Xbox Series X consoles sold by Microsoft.

Harding-Rolls does say Microsoft is in a much better position at the start of this generation than they were when the Xbox One launched. The reason for this is due to expansion of first-party studios, more of a focus on the console gamer, and the system launching with Halo: Infinite.

He also expects both consoles to launch at the same price with a range of $450 to $500, which is different from the current generation when the Xbox One launched at $100 more than the PS4.

However, he does add Sony's current market lead over Microsoft will help them get a head start this generation and the allegiance to the PlayStation brand will "especially hard to dismantle."

.If its this easy to be an analyst hire me pls -.-

I bet the fight will be much closer for these two than the current ending 8th gen.

It should be obvious that under normal circumstances PlayStation will always outsell Xbox globally. Even with everything going for them and a year's head start, the 360 did not beat the PS3 globally. It did have a resounding victory over the PS3 in the U.S. & UK, but it was easily defeated by the PS3 in mainland Europe and Japan. While I think this generation will be a bit closer, there's no way MS is going to replicate the 360's level of success again. I think it'll be very close in the U.S. & UK, but mainland Europe will always be PlayStation Land, and Japan will continue to largely ignore Xbox.

I agree the PS5 is almost guaranteed to outsells Xbox Series X worldwide. I could see Microsoft improving sales this gen and having a chance of selling better in North America and UK.

360 failure rate wasn't that high. For launch consoles? Maybe. MS replaced all consoles that RROD for several years for free. The Xbox 360 S was very reliable from what I recall.

Even when being replaced, the Rrod still persisted in the new replacements. I myself had 2 rrod's back to back, some others had 3 or more. A lot of people jumped ship because of it as well. The Xbox 360 S released in 2010, 5 years later in order to solve rrod, that's not something to brag about.

Correction: The PS5 will outsell everything worldwide come this November. Like I said before Sony is ready for the smoke and the event today showed that.

The hardware speaks and this time XBOX is more powerfull. Moreover i don't believe there will be any difference in selling prices.

You know Sony outsells every generation besides the 7th right? Yes Series X has 2 TFlops more power but Sony always has the better games. And games are what sells hardware. History usually repeats itself I expect this 9th gen to be no different in Sony's favor. Microsoft has a lot to prove they're serious this time around.

If they come up with an adequate refresh and good games I predict Nintendo’s ninth generation system will also outsell Xbox.

If they come up with an adequate refresh and good games I predict Nintendo’s ninth generation system will also outsell Xbox.

It will be a closer fight than the 8th Gen, but PlayStation's lead is inevitable. It would be an upset otherwise. PlayStation has outsold every Xbox (360/PS3 is debatable, but they're basically at least dead even).

In other news, water is wet

Meanwhile, the sun will rise tomorrw.

To the surprise of nobody.