What do you get when you combine space exploration and golf? How about Super Meat Boy and golf? Rhythm games and golf? Bowling and golf? First person shooters and golf? The answer to all of these and a ton of other questions you never thought you'd ask yourself is What the Golf? A game that's truly one of the most bizarre mixtures of genres I’ve ever had the pleasure of playing.

The entire game is a balancing act between cleverness and goofiness that What the Golf? walks almost without stumbling. For every neat mechanic or piece of great level design there's a joke or reference attached that would continuously surprise me with how harmoniously it all worked together. Things that just do not sound like they should be mashed up not just worked, but excelled. Things like Superhot with golf balls, to first person golf, and even Guitar Hero golf consistently delight. 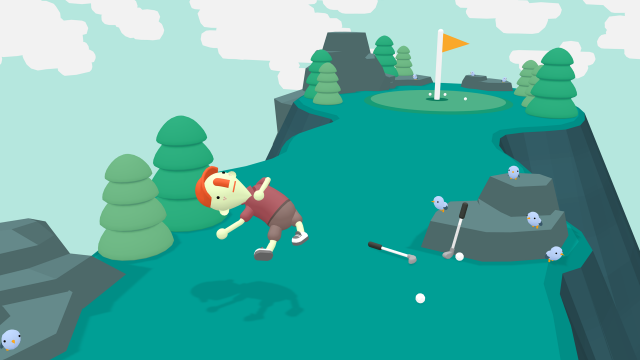 Some ideas are played with longer than others, which is great because it means they never outlive their novelty and when it's time to move onto the next thing the game duly does so. Unfortunately there is one weak point - the bosses at the end of each area. These miss the mark, being neither interesting, fun, nor crazy, with the exception of the final boss which scratched the same itch as the rest of the game; I just wish each area boss was more in line with that particular battle.

Progression in What the Golf? allows for those of all skill levels and/or time commitments to enjoy it. The first stage of each new hole gives the player as many strokes as they need in order to complete it. And that’s all you need to do if you want to progress onward to the next area and eventually reach the end of the game. However, if you like to push yourself a bit further each hole has two further challenges that you can attempt to complete. The second challenge typically gives you a par (set number of shots) to aim for in order to complete it, while the third challenge is a lot more atypical and plays around with your expectations.

These second and third challenges are there for completionists, and by beating all of them you’ll gather up collectible items that are stored in a trophy room type area. There's no further reward beyond that though - the collectibles are only there for their own sake. But many of the second and third challenges are amongst the most inventive and fun parts of the game, so the extra content is very welcome despite the fact that it doesn’t lead to a more significant reward for completion. 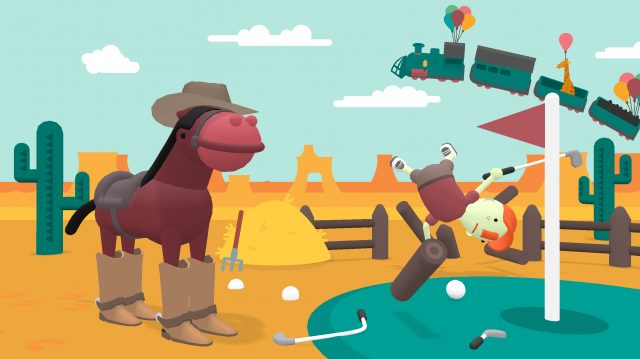 The minimalist art style helps the occasionally busy courses remain focused, so that you're always aware of the goal for the stage, as unique as that goal may be. These objectives can be as straightforward as to hock a loogie, or more complicated like loading a moving van and then throwing your entire house after it, or downright weird like jumping your horse over a series of train cars. Mechanically the game follows suit - point the joystick in the direction you wish to travel, push a button to build up a power meter, release at desired power to take your shot. This is where the game most feels like an early evolution of traditional golfing gameplay, stripped of all its wind resistance and top spins and kept to its purest functional form.

Despite how shallow the game may seem at first glance there is a strongly Portal-inspired narrative binding the whole package together. It both keeps in line with the ridiculousness of the levels you’re playing as well as adds some welcome depth to the odd world you’re exploring as you progress.

Outside of the standard campaign there are a handful of other modes, although they're rather trivial in comparison, consisting of a couple of challenge modes with leaderboards, a demo mode (should you wish to show the game off to a friend without letting them play your campaign), and finally a party mode. The party mode is a two player game that has both players racing to the flag against each other in randomly selected levels. At the end of the gauntlet of levels players are then pitted against each other in a one-on-one deathmatch arena, in which each level they won on their way to the arena counts as an additional life point. These death matches are randomized as well, with some being much better than others. This mode is fine for a few laughs, but doesn’t have the appeal or even replayability of the main campaign. 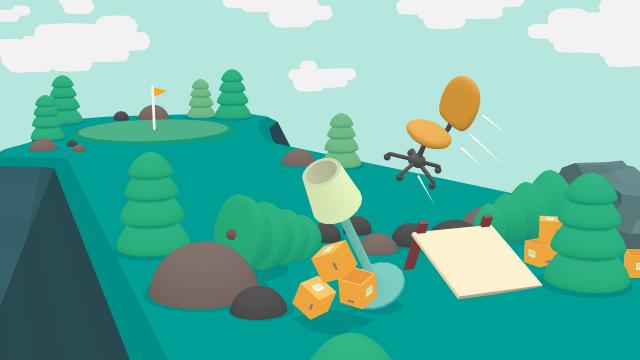 Stripped down to its core components What the Golf? is a simple set of physics-based mini-games strung together. What makes it so special, though, is how well knit together that string is, and its ability to iterate on ideas no matter what direction that takes the player. There are very few video games where the key selling point is its comedy, but What the Golf? had me laughing out loud and calling people over to share in great moments and jokes numerous times throughout. What the Golf? Is the dad joke of video games - and I mean that with a great deal of love. Even amidst all of the puns, cheeky humor, and just plain silliness there's an immense amount of respect and passion shining through for the medium that it satirizes so well.

This review is based on a digital copy of What the Golf? for the NS, provided by the publisher.

Good to know that they pulled it off. It seemed wacky from the get-go, glad that the execution was on par :-)

Really happy to hear this game does all that it set out to do! :D