Between Exit the Gungeon and now this, Spring 2020 seems to be the time to experiment with simpler, lower priced spin-offs of previously well-loved entries in the same franchise. Perhaps fittingly, then, XCOM: Chimera Squad is largely XCOM on a smaller scale. Fewer features, less complexity, smaller stakes, and a lower price tag to boot. But does it keep enough of the traditional XCOM experience intact to justify that cost? Well... sort of.

Chimera Squad picks up the story five years after the events of XCOM 2. Following the destruction of the Ethereals, most of the other aliens appear to have collectively realized that the whole kidnapping and brutally experimenting on humans thing in the last game was perhaps in poor taste and have come together with the denizens of Earth to rebuild a new society where human, alien, and... human-alien hybrids (however that works) can live in peace. Most of them have even gone so far as to learn how to speak English in comforting American accents, which feels a bit like revisionist history to me, given that even the aliens genetically mutated to look and act like humans in XCOM 2 were only capable of gibberish, but I digress.

Quibbles with the back-story aside, Chimera Squad places us in the boots of a strike force trying to protect order in City 31, a shining beacon of human-alien diversity. After the mayor of City 31 is killed, unrest grips the streets, and it’s up to the titular Chimera Squad to try and maintain order while uncovering the sinister forces out to make humans and aliens hate each other again. As with previous XCOMs, we’re required to maintain order over an incredibly large area with the payroll of a girl scout cookie stand and a staff number in the single digits, which didn't make a lot of sense in past games and makes even less sense now that we're the law enforcement for this tow and we're frequently sending troops out on missions where they'll be outnumbered four or even five to one.

But this is where the similarities in the narrative structure, such as they are, end. While past XCOMs usually started by focusing on a mysterious threat and based their entire story around it, Chimera Squad places much less emphasis on that front and far more on the individual characters. Soldiers all have defined names and personalities now, and frequently pop up in slideshow “cut-scenes” where they’ll interact with each other. It’s a shame, because the interesting parts about XCOM stories were uncovering mysteries and learning more about the alien forces and their hierarchies, but any opportunity for that is stripped away when the majority of the aliens are on friendly terms with humanity.

If anyone was ever wondering why Firaxis may not have focused much on writing individual characters beforehand, this game serves as an excellent example of why. The dialogue here is downright painful to listen to at times, and merely bad when it isn’t. Commander Bradford or Shen might not have been the most complex characters, but at least they didn’t consistently make me want to mute my volume. The banter between characters reminds me of the main cast from Watch Dogs 2 at times, with the “kids these days think this is cool, right?” vibe that it gives off, and the dramatically colorful neon-flourescent art style of the cut ins only strengthens that comparison.

Given its smaller scale, it’s perhaps only fitting that Chimera Squad shrinks the scope of the combat in XCOM as well, reducing the length of encounters and splitting missions into several, smaller maps with all enemies revealed at the start. The standard turn based combat plays out pretty similarly to Enemy Unknown and XCOM 2, revolving around strategically placing your units in cover to both keep them safe and to get the best shot possible on enemies. The real changes to combat, however, come with how the game connects the smaller maps.

Here we're introduced to the breach mechanic, which serves as the link between the different “mini-maps” that comprise each mission. Most missions begin with breaking into a room, getting a free shot on the various enemies, transitioning into standard XCOM combat until all the baddies are gone, and then breaking into the next room. Rinse and repeat until the game says you’re finished. At the start, it’s fairly simplistic, but it doesn’t take long for things to get more complicated as you’re presented with different ways of entering rooms that provide different bonuses or penalties, and certain enemies start firing back at you when you enter.

It’s an interesting mechanic that provides a new spin on things, but isn’t without its issues. For one, you have no hand in choosing where your troops will choose to move to after breaching a room. Most of the time, they’ll automatically pick the best cover available within a short range, but on several occasions my units just sat out in the open, essentially painting giant red targets on their chests. In one particularly awful instance, one of my units took cover next to an explosive barrel (you can imagine how that ended). On top of that, the only information you’ve given about what will be in the room before you breach it is a rating that the game uses to assess how likely you are to take damage if you choose that point. But this ranking feels incredibly inaccurate, as some “very likely” to take damage options were ones I breezed through without effort, while others led to my team taking serious damage.

The final significant change to the moment to moment gameplay is that turns are no longer separate “player” and “enemy” phases, like in past XCOMs or Fire Emblem. Instead, player characters and enemy characters go one after another, and the order of when each unit moves is predetermined, so if you really need to move a particular unit of yours out of a dangerous situation right now, then, well, too bad, most of the time. This isn’t necessarily a negative, as there is an interesting element of strategy in choosing which enemies to fire at based on not only how dangerous they are, but also when they’ll get to move next. Unfortunately, the breach system again immediately throws sand onto the wick of an interesting idea by making the enemy turn order indiscernible before you breach through a door. The result is it’s very possible to have a soldier placed in a dangerous position with no real way to stop them from taking damage due to no fault of the player.

In fairness, these situations are rare, as you have to have a number of unlucky rolls go against you, but it’s frustrating when it does happen because it’s punishing the player for no fault of their own. I get the feeling that Firaxis was aware of this, too, because the healing system between battles is much more generous, at least on normal difficulty. In prior XCOM games a soldier taking damage meant they were almost assuredly out of the lineup for the next battle (and possibly more), but Chimera Squad allows soldiers to heal up to 50% of their HP in-between battles. This does change on higher difficulties, however, which may exacerbate the aforementioned randomness problem.

Speaking of between battles - the researching/base management component of XCOM has been simplified as well. Rather than managing resources to excavate and building new spaces for a limited number of facilities, the only real returning strategic choices for the player are which things to research and which upgrades to buy for soldiers. It works well enough for a simpler game, I suppose, but it feels very barebonesy and lacks much of the resource feedback loop that made past games engrossing.

Of course, it wouldn’t be XCOM without some looming panic meter hanging over your head at all times. As in past XCOMs, your job is not only to win battles but to maintain public confidence, in this case in the form of “public distress” meters. Your map of the city is split into multiple sections, and failing to attend to a section long enough can result in its distress meter being maxed out. If a region’s distress meter is maxed out, it adds one point to the overall city’s “anarchy meter” every day, and if that anarchy meter gets maxed out, the game is over. So you have to strategically choose which regions to attend to in order to avoid a game over, while letting some of the other ones suffer. Fortunately, compared to past games, it felt much easier to avoid ever reaching max distress for a territory.

Technically and graphically, it very much like the past two XCOM games. If you’ve played them, you know what to expect - a decent enough looking game with many of the same bugs and quirks from previous entries. Characters will still shoot through walls, sometimes dead bodies will keep spazzing out on the floor as if they were having a seizure, and there’s often a weird lag between characters firing and the shots hitting/missing. One of the funnier bugs resulted in one of my soldiers floating in the air and being unable to move despite still being able to shoot and take other actions normally. Less humorous are the bugs that actively impede gameplay significantly, like when my camera disappeared into the clouds and made it next to impossible to see where units could move (see below). And there are the good old freezes, of both the soft lock and hard lock variety. 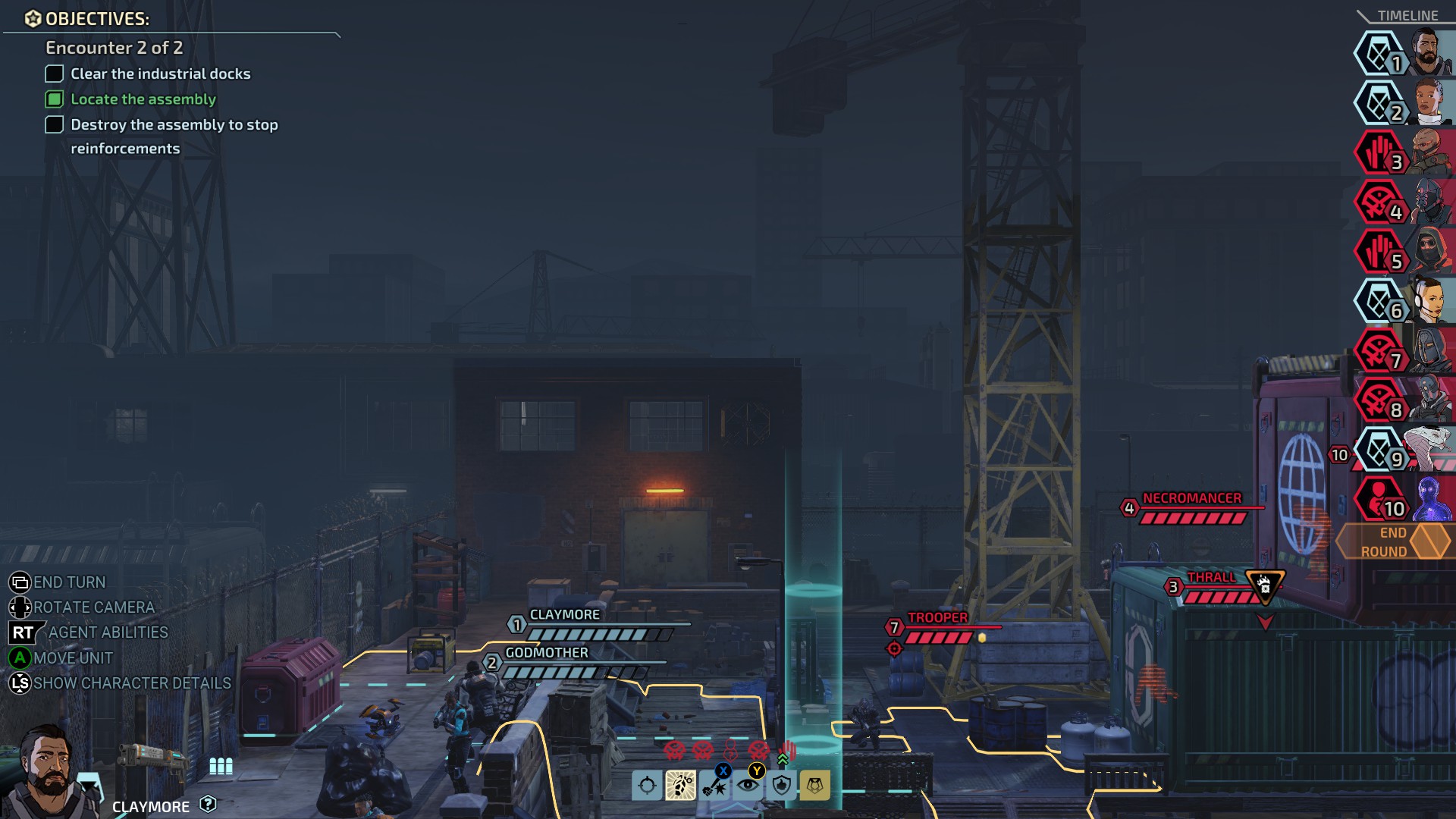 So, yes, the game is much shallower than past XCOMs and it's also somehow even buggier. It becomes readily apparent that it simply isn’t as good as either of the most recent XCOM games. That’s probably to be expected; giving this game only a week’s announcement and far fewer features should indicate that it isn’t meant to be a full fledged entry in the XCOM series. The question is perhaps, then, not is it an improvement on past XCOMs, but is it worth it for a cheaper price point ($20)?

If you’re new to the series, then it’s hard to recommend this over Enemy Unknown or XCOM 2, especially given that they frequently go on sale for comparable prices. Conversely, if you played XCOM previously and didn’t enjoy it, this certainly won’t change your mind. Ultimately, it’s tough for me to recommend this to anyone but people who loved the prior games and are desperate for any morsel of similar content they can get while waiting for an XCOM 3. If you’re in that group, you’ll probably extract some enjoyment out of Chimera Squad, although you’re likely to find just as many problems to complain about along the way as I have.

This review is based on a digital copy of XCOM: Chimera Squad for the PC, provided by the publisher.

Enemy Unknown looks to now have a standard price of less than Chimera Squad so might look to be a better buy if you haven’t already got it.