Infinite: Beyond The Mind (NS) - Review

In a gaming era rife with flashy, bombastic AAA software, there’s definitely still a place for classic button-mashing brawlers. Ditching the cinematic bells and whistles, these are games that get straight to the point, pummelling you with pure gameplay and near-constant action. Developer Emilie Coyo and Blowfish Studios superbly tap into that late-80s gaming feel with their thrilling action romp, Infinite: Beyond the Mind.

Along with the recent renaissance of Streets of Rage, games like this remind one just how appealing this forgotten genre once was. Comparisons to the old TMNT games, Final Fight, and Double Dragon tend to be dredged up soon after being dropped into the action. At the same time, the game adds a bit of depth with some platforming level design to keep you on your toes. A few imperfections and simplicities hold it back from reaching the lofty heights of those gems, to be sure. Regardless, Infinite mostly succeeds in emulating retro beat ‘em ups at their peak. 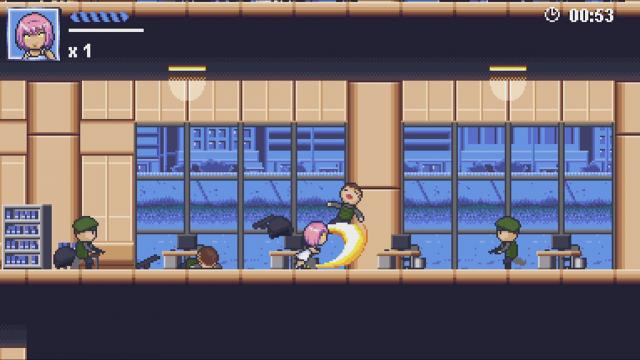 As you might expect with a 3 hour, pixelated button-mashing sprint, the story is marginal and cliche at best. You play as one of two women who have discovered the ability to use special powers. This has made them the target of a tyrannical Kingdom and its sorcerer queen, Evangelyn. The queen sends forth her brigades of pesky, heat-packing troops, bots, and artillery, which you must dash and slash your way through.

These enemies range in terms of behaviors, as well as offensive and defensive prowess. Most, however, take the form of fairly stock military men wielding various weapons running the gamut from pistols to machine guns to grenades. There’s also a boss fight waiting for you after each multi-level biome, which proves exciting without being ridiculously tough.

Playing as either Tanya or Olga, you’ll be given mostly the same palette of moves - and it's a limited one, to be sure. Your basic jump can be extended into a double jump, which you’ll sometimes need in order to hop across some tough-to-reach platforms. Additionally, you can perform a dash move, which drains a meter displayed beneath your health bar. Dashing is fun, satisfying, and also quite useful. You can use it to dodge mid-air projectiles, evade tough spots, leap across vast gaps, and flash through deadly lasers. You’re also able to roll, which is akin to a ground-level version of this dash. 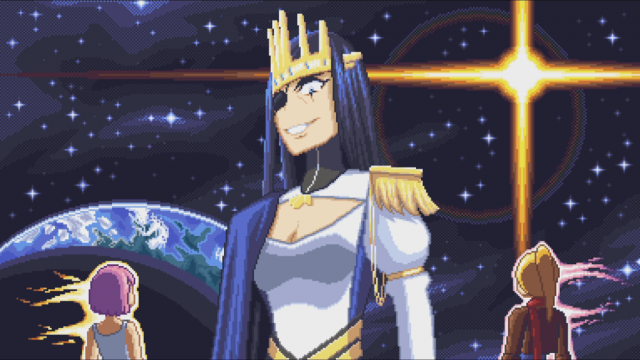 Your offensive abilities are a bit more limited, as they basically amount to frequent close-range slashing. However, with a full meter, you’ll eventually unlock more powerful, bullet-deflecting slashes while airborne. You can bust out an explosive, screen-wiping special move a couple of times per stage, too. Given the rarity of upgrades, the speed of your character, and lack of offensive moves, Infinite: Beyond the Mind tends to stress speed and survival over sheer firepower. Wailing on tons of foes in a short time will occasionally net you extra lives, and you’re rewarded with higher scores when knocking out a stage quickly.

The majority of baddies can be slain with your close-range slash move in just a couple of hits. Still, you’ll usually want to measure their behaviors, rather than marching in while mindlessly button mashing. These anticipatory moves will help you dodge their projectiles and live to fight another day. Though you’ll stumble upon health and extra life pickups at times, these are scarce - as are the checkpoints, which only kick in at the conclusion of each “area.”

The game further adheres to this unforgivable NES style by allowing you to save only at the end of each multi-area stage, granting you only a few lives and a short health bar in the process. This grind-it-out showdown is even tougher with the “expert” difficulty setting, as your health bar is even shorter and the ability to save is stripped away. Basically, you’ll want to be sharp, especially on the highest difficulty. 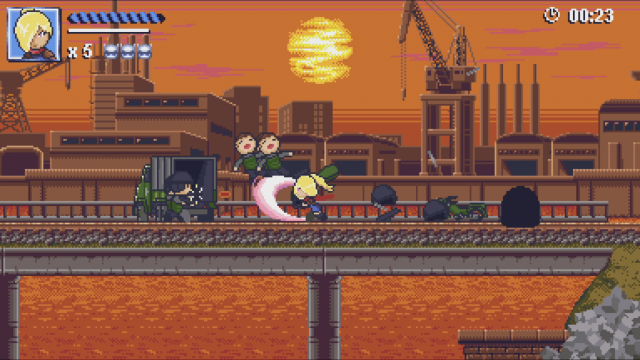 As you power through the 16 stages (each of which contains 2 or 3 bite-sized areas plus a boss), more competent and dangerous foes start showing up. You’ll come upon certain enemies covering in trenches, popping out of trucks, or posted up on high platforms. You’ll even run into tough vehicles and machinery like helicopters and robots. It certainly adds to the difficulty, while keeping feelings of repetition at bay.

One neat little inclusion is the ability to occasionally match this firepower by way of saddling up in a stationary tank. While inside, you can mow down waves of incoming troops all around you for a short time. Similarly, you’ll also be forced into static survival portions sans the tank, which can amp up the intensity quite a bit. There are even a couple of flying and scrolling areas to mix things up.

In general, the game walks that tightrope nicely in terms of difficulty - at least on its default setting. It can seem a bit chaotic at first with the breadth of projectiles from multiple areas, especially since you can only answer with close-range hits. Still, Infinite becomes far simpler once you’ve taken your lumps a couple of times and get a feel for the baddies and the stage layout. It’s easier when you’re prepared to handle that incoming tank or chopper, or can anticipate that electric wall or falling platform. Rarely did I feel like my deaths were anything but my own fault. With that said, the Double Dragon-esque push backs that sometimes knocked me into pits didn’t exactly feel just. 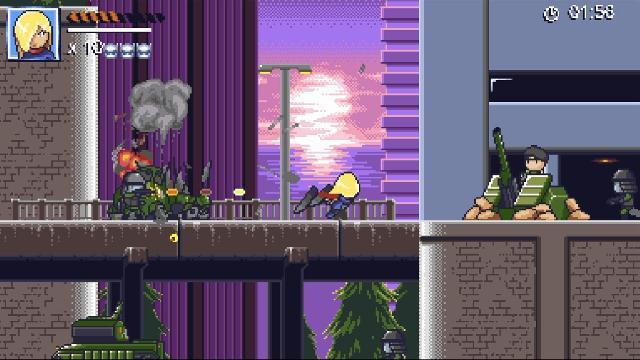 The control method makes a difference in tightening things up and offering a smoother experience. I wouldn’t typically stress opting for a D-pad-laced Joy-con, but in this case the improvement is vast. Seriously, if you’re inclined to make the most out of the game, consider shelling out for the HORI D-Pad left Joy-con. Infinite is still suitable when mashing the standard directional buttons, for the record, but there’s a level of swiftness and precision with the D-pad controller that meshes perfectly with the fast-paced, NES-style experience. Tanya/Olga seem to genuinely move around quicker and more sharply.

Another addition that’s both helpful and enjoyable is simultaneous co-op. In true Final Fight fashion, two players can kick some butt at once, doubling both the fun and efficiency in combat. Playing with separate Joy-cons isn’t always the most comfortable or intuitive, but the added offense makes up for some of that.

Any real blemishes of this game mostly boil down to nitpicks, and major flaws are few and far between. There’s the aforementioned prominence of push-backs while getting hit, but only rarely do these coax catastrophic death plummets. Also, while the environmental detail and layering is nice, it can sometimes be tough to make out just where you can jump and where you can’t. Jumping onto ladders to climb can also be a somewhat spotty, finicky endeavor, though these aren’t abundant at least. 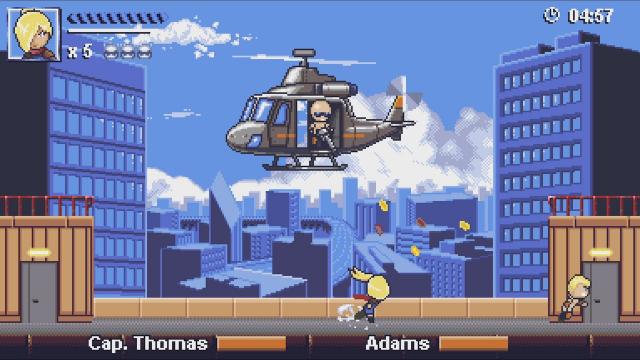 Infinite: Beyond the Mind won’t blow any minds with its (literal) straightforward gameplay and brevity. Nonetheless, it makes for a fun, delightful throwback to the side-scrolling brawlers of decades past. This tight, undiluted action gameplay is complemented by a charming pixel-art-meets-anime style and appealing synthetic tunes. The 16-bit sprites add some retro character, though they’re really put to good use with the multi-layered backgrounds and colorful, vibrant biomes. These range from military bases to industrial furnaces to ice tundras.

Overall, Infinite is a captivating action sidescroller that early 90s brawler fans, in particular, should get a kick out of. It’s a short and fairly basic experience, but worth checking out at just 10USD. Play with a friend or use a D-pad attachment to really get the most out of this already enjoyable romp.

This review is based on a digital copy of Infinite: Beyond the Mind for the NS, provided by the publisher.