Research firm SuperData has released its report for the worldwide digital games market for March 2020, which reveals some interesting sales figures for some major games.

Animal Crossing: New Horizons set a new record for the most digital copies of a game sold in a single month than any console game in history with sales of five million units.

"The game’s combination of social features and a relaxing setting likely appealed to individuals stuck at home. Closures of brick and mortar stores also meant that a higher share of consumers purchased the game digitally compared to past Switch titles." 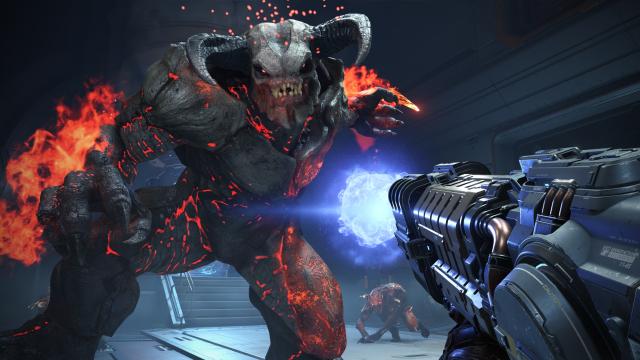 The report also says that id Software's first-person shooter, Doom Eternal, sold three million digital copies in March. This is more than three times what 2016's Doom sold when it launched. That game sold 957,000 digital copies in its launch month in May 2016.

"The latest entry in the seminal franchise benefited from strong reviews and the positive reception of its predecessor," reads the report. "However, as a primarily single-player game, Doom Eternal will likely have a shorter revenue tail than other multiplayer shooters that monetize through the regular sale of in-game content."

Half-Life: Alyx had a decent launch as a the AAA game was a virtual reality exclusive on Valve's Steam platform. The game had 860,000 players in March, which is a high attach rate as the install base for PC compatible VR headsets was less than four million at the end of 2019.

"Direct purchases of Half-Life: Alyx generated $40.7M in revenue, and hundreds of thousands of free copies of the game were also bundled with devices like the Valve Index headset to boost interest in VR," reads the report.

Impressive. Still somewhat sad that the physical market is taking a hit.

Bought the game twice myself. Physically for my wife to use, and digitally on my Switch. Glad to see the success!

If you do it physically and digitally can you have two different islands on the same switch? Just curious.

No, the game data is tied to the Switch itself. She uses our son's Switch, and I use mine. We double dipped so we could visit eachother's islands. I got the digital version since I play a lot of different games, and AC is a game you can easily jump in and out of. I usually prefer physical, but digital makes sense for this game given the nature of it.

amazing!! I'm pretty sure this happy little game is helping people's mental health, and looking at things from a different perspective in this time of quarantine, good game to be popular!! society wise :P