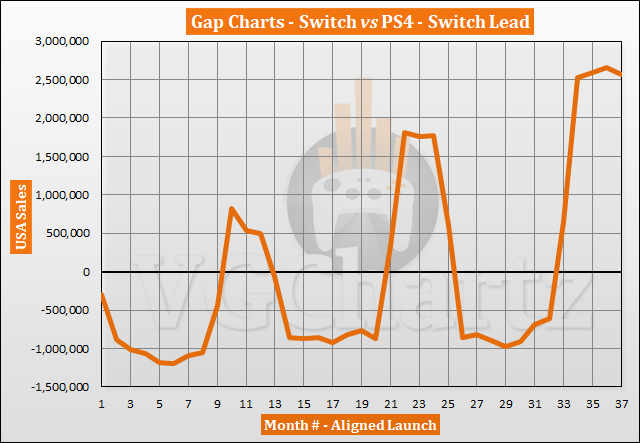 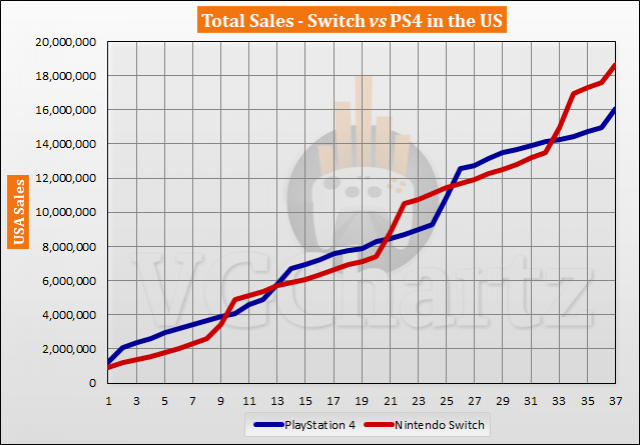 In March 2020 the gap in the US between the Nintendo Switch and PlayStation 4 grew in favor of the PS4 when you align launches. The PS4 sold 92,078 more units than the Switch in the last month. However, in the last 12 months the Switch has grown its lead by 1.96 million units. The Switch currently leads by 2.56 million units.

The 37th month on sale for the Nintendo Switch is March 2020, while for the PlayStation 4 it is November 2016.

The fact that Switch sales in a month like March are almost as big as PS4 in November is hilarius.
Imo, we can safely say that PS4 will never catch up Switch in USA.

At this rate, a comparison to the 360 in the US would get more and more interesting

Especially because last I checked the 360 was ahead of the PS4 now this might have changed since I last saw it.

The PS4 also peaked early in the US, in 2015, though 2016-2018 weren't too far behind. Still, Switch is selling much better than the PS4 ever did in the US right now, so Nintendos console would need to crash like the Wii did to not end up in front of the PS4 in this race.

Speaking of the Wii, that one made it to 45M in the US, could also become a nice comparison imo.

As long as the Switch keeps selling (it likely will) I'll create those Gap Charts. 360 had really strong sales later in it's life due to Kinect. So Switch is likely a fair amount ahead when you align the launches.

And with the Wii, it's the other way around, Wii blazed ahead but is starting to falter right now

Sorry, my bad. But yeah, most of those sales were from the US, and the 360 did really very well there. If the Switch could keep up with the 360 it could very well become one of the bestselling consoles in the US ever.

Does this include the adjustments for the Switch in March ? Cause if not, then Switch is a lot higher.

That likely won't happen because people want to keep believing it's "hilarious" that there is a pandemic going on causing people to stay home and buy games and hardware. They want to believe a narrative that the Switch had all this demand by itself in the month of March and had nothing to do with a lockdown period forcing people to stay indoors. Even 6 and a half year old systems are up over 25 percent in the US. But yeah, Europe charts would definitely be interesting for some folks on here.

How many units did the ps4 sell in the US for the month of December?