"Digital sales in particular have been very strong, and continue to grow," said Square Enix.

"That’s quite the figure, and it’s not the only big number the game’s seen. The game also received a terrific critical reception, with journalists around the world scoring it highly and singing its praises." 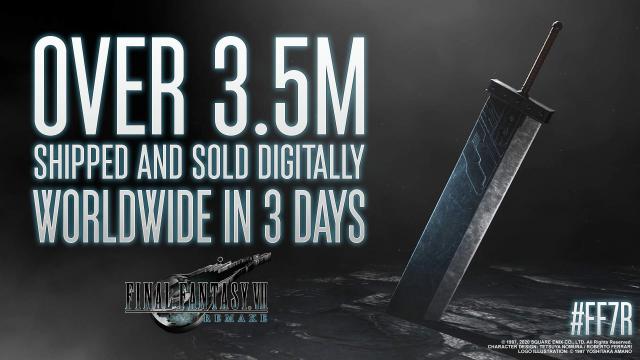 Final Fantasy VII Remake is available now for the PlayStation 4.

This is not surprising. I love the game, I'm 48 hours in and almost done (last chapter) and I tried to complete everything (quests, challenges etc..). I'm going to jump in FF 13 after that!

To go back to FF 13 after playing this game means that you are a big FF Fan. The FF 13s were my least favorite. And was little dissapointed with FF 15.

Happy to hear! Although its not without its faults, FFVIIR is the first game in a long while to convince me that SE can still string together great gameplay, storytelling, pacing and world building in a way that really captivates. Couldn't get through Kingdom Hearts 3 or FFXV.

kingdom farts 3" that story made me wanna die :P
ff15 was like mostly fetch quests which is the problem but still sold super well but they had to get rid of minigames songs areas story elements and more to sell it to a certain market
DQ11 story also made me wana die its so depressing for some reason and i love the shin megami tensei games so that says alot lel
they did talk about remaking 5 and 8 mostly -- they said that 8 remake would have elements from the squall is dead fan theory
no one has talked about remaking 9 :[

It is like Kh3 and FFXV were competing in the categories bland and nonsensical story.
Powered through both, felt dirty afterwards.
I never played FF7, but I intend to buy the whole package on PS5 when the time is right.

This is the level of quality I expect out of a FF.Hopefully this signs that a FF renascence is comming.

If this keeps selling well they will surely take note.